Looking for a Multi-Role Combat Aircraft the govern­ments of the United Kingdom, Ger­many, Netherlands and Italy joined forces in the Panavia Aircraft multi­national company. They wanted an aircraft to replace both bombers and interception/recon­naissance fighters. Originally two versions were foreseen, the Panavia 100 single seater and Panavia 200 two seater. Only the last was finally developed, after the Nether­lands withdrew and with changing requirements.

The Tornado thus has two seats as standard. Like many fighters of that time the air intakes have a wedge shape, which are diagonal when viewed from the side. They are smaller than on other fighters. The PA200 has variable sweep wings, allowing low-level flights at high speeds, and enabing a low speed for landing. The thrust reversers also help reducing the runway length needed. Finally, the huge single vertical stabiliser is a clear recognition point. 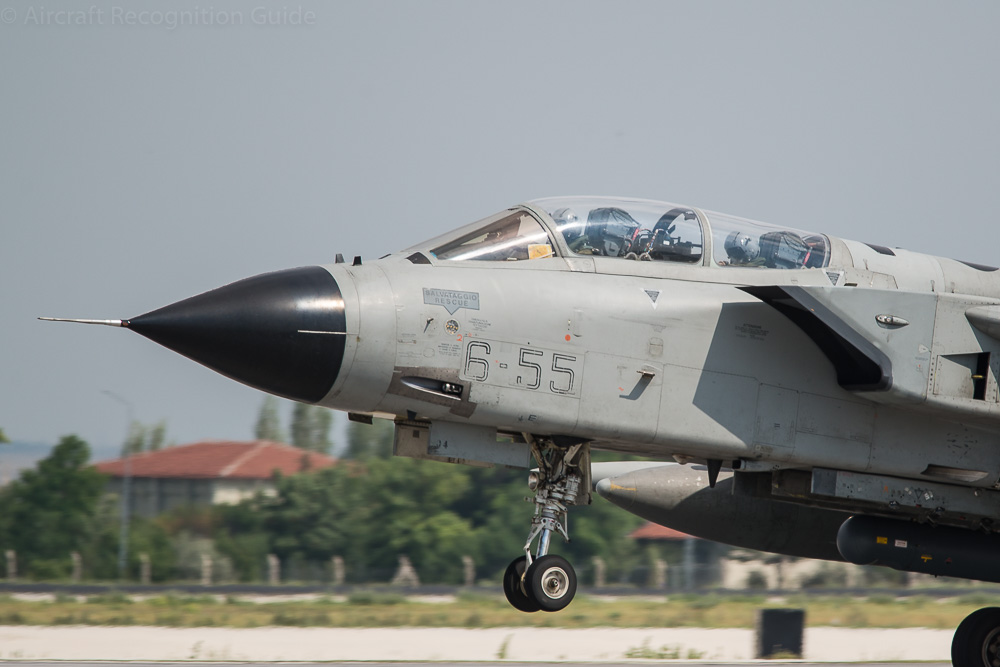 The Tornado has wedge shaped air intakes, which are smaller than on other fighters. Also note the two-seat cockpit and almost flat fuselage side and bottom. 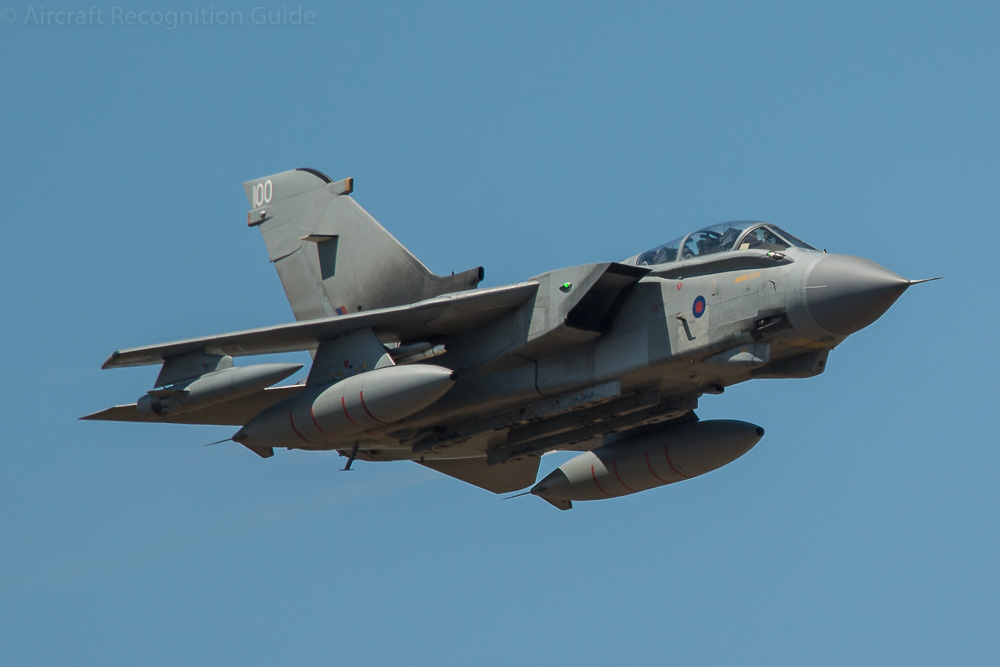 The variable sweep wings are a recognition point of Tornado. Here they are in the aft-most position. 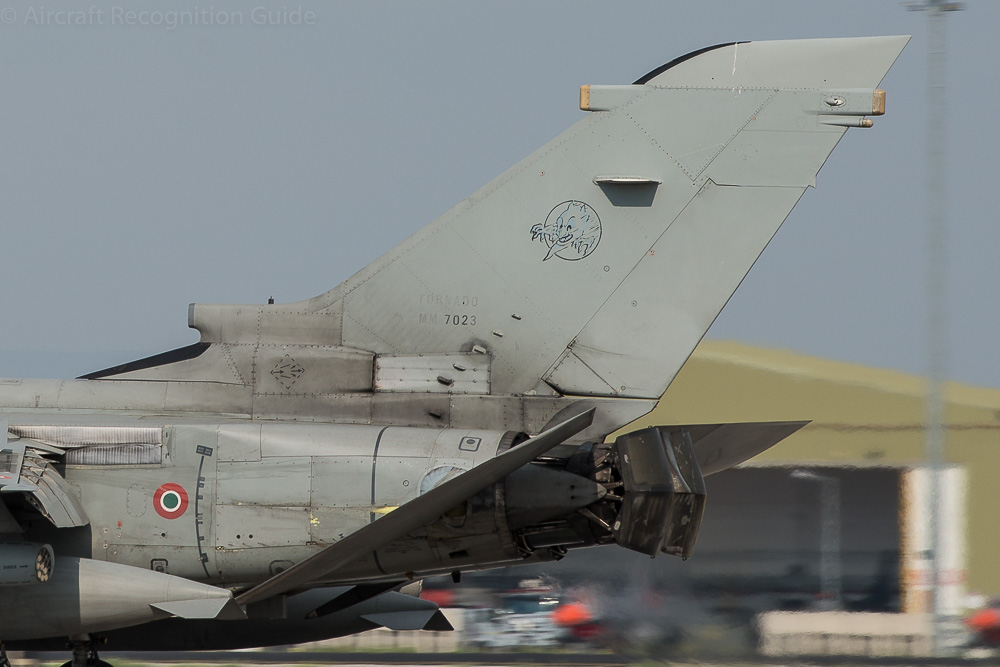 The Tornado has a huge vertical stabiliser compared to its size. The photo also shows the all-movable horizontal stabilisers and thrust reversers. 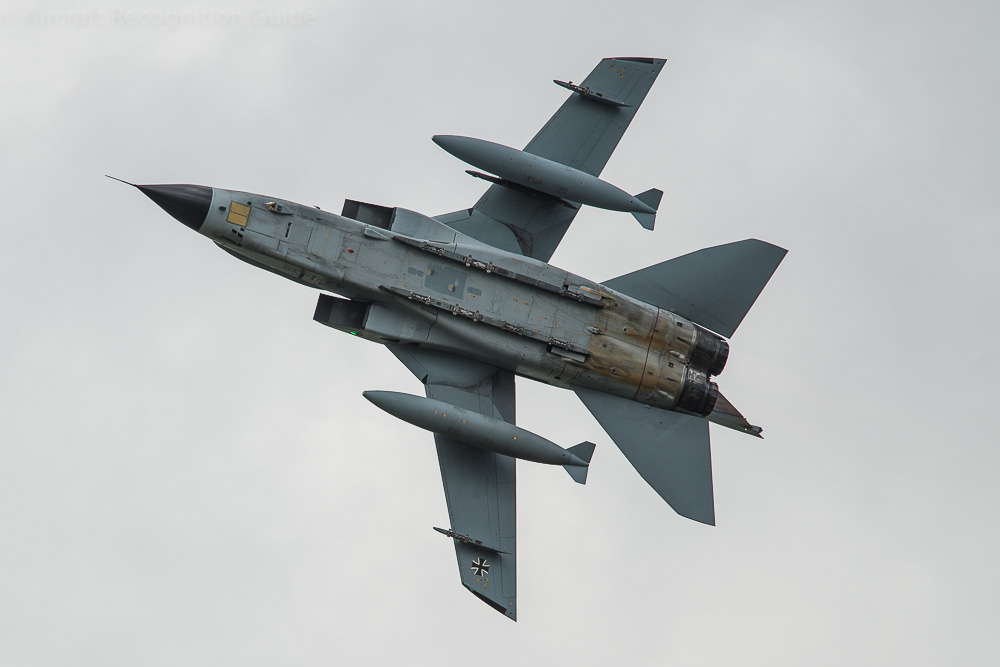 This underside shot shows the wings in the position with the least sweep.

The different versions of the Tornado can nearly only be recognised by looking at the nose. The type of missiles could also be a distinguishing feature.

The basic version of the Tornado is the interdictor/strike variant, abbreviated IDS. This version has a short nose, although pointed. Originally all IDS versions had a cannon on each side of the nose, where the side of the fuselage transitions to the bottom. Later versions may lack one or both cannons.

The German and Italian air forces use this basic variant, as did the Royal Air Force and Royal Saudi Air Force, initially. The original RAF IDS version was designated Tornado GR1. 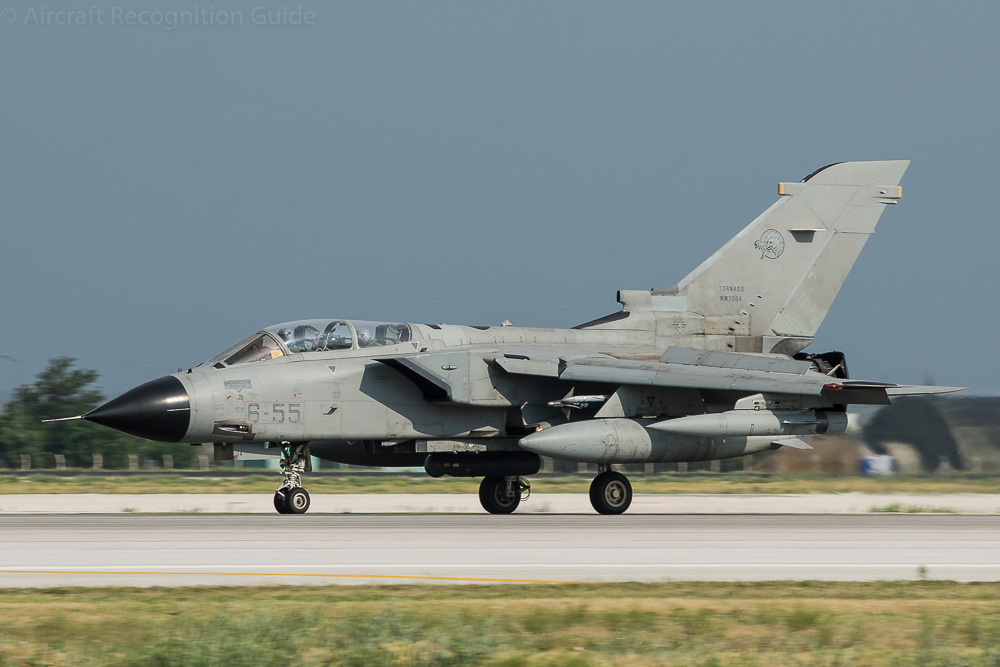 A full view of an Italian Tornado IDS. A detail of the nose, with the left cannon, can be seen above.

The first update was the Tornado GR1A, which has a reconnaisance sensor on the right side, below and aft of where the cannon used to be. The cannon of the left side was removed as well. Similarly equipped Saudi Tornados have kept the cannons though. 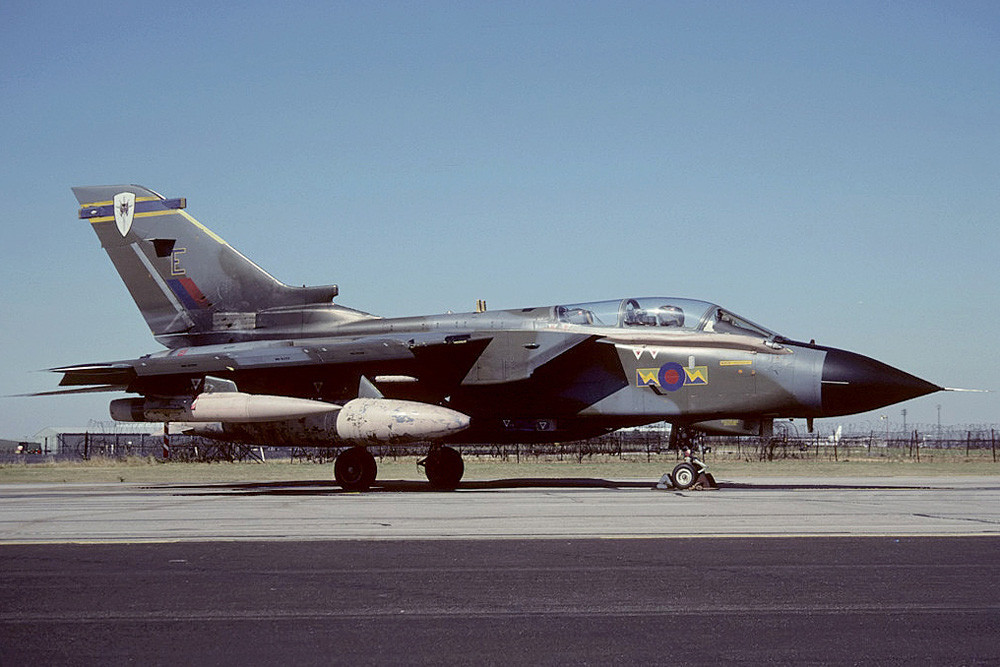 Right side of an RAF Tornado GR1A, with a sensor pod below the forward fuselage. (photo WikiMedia/Mike Freer) 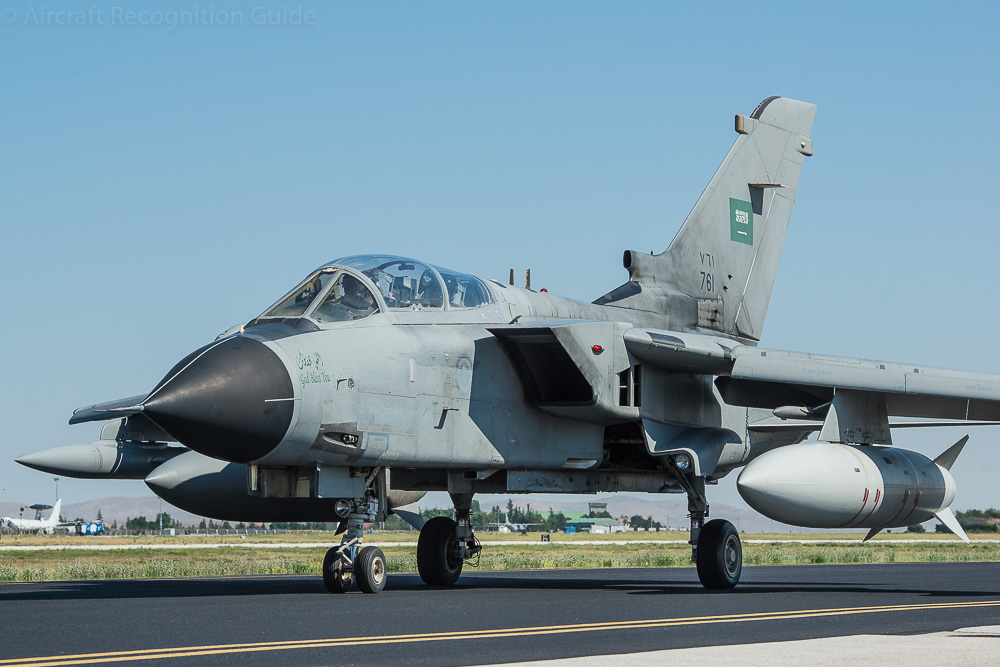 The Saudi Tornados are similar to the Royal Air Forces Tornado GR1A, with a sensor on the right side, but with cannons on both sides.

Another upgrade of the Royal Air Force Tornado GR1 was the Tornado GR1B, which has the possibility to launch anti-ship missiles. If you know how to recognise these, then you could identify a Tornado GR1B.

Finally, the Tornado GR1 and GR1A received a mid-life update, called Tornado GR4 and Tornado GR4A respectively. In both cases a sensor pod is placed under the forward fuselage, just behind the cannons. The GR4 still has cannons, but the GR4A has not. 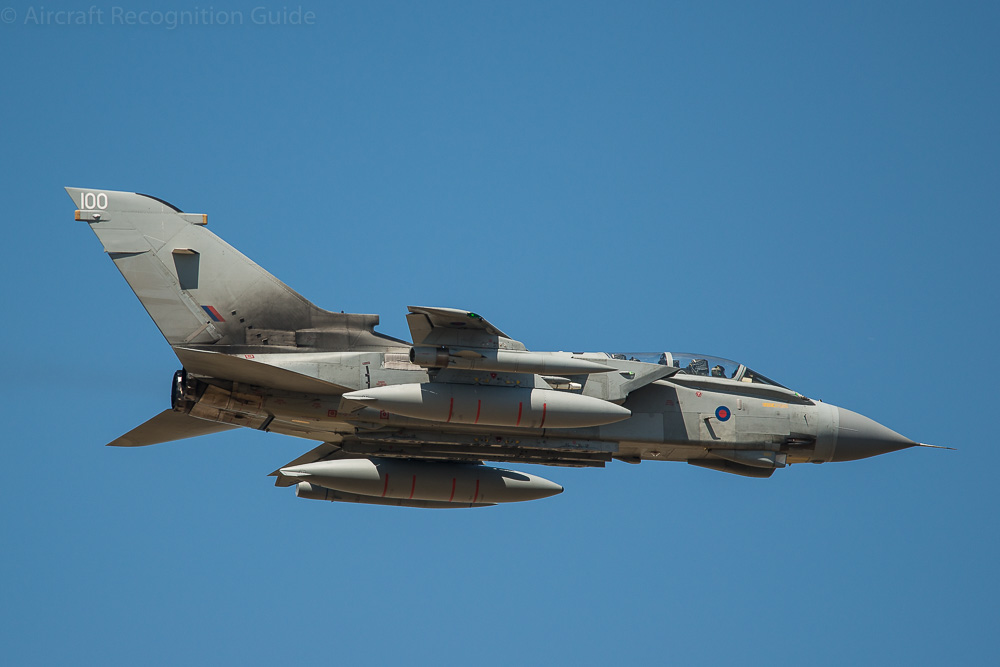 The Tornado GR4 has two sensors underneath the forward fuselage, below the cockpit and behind the cannons. 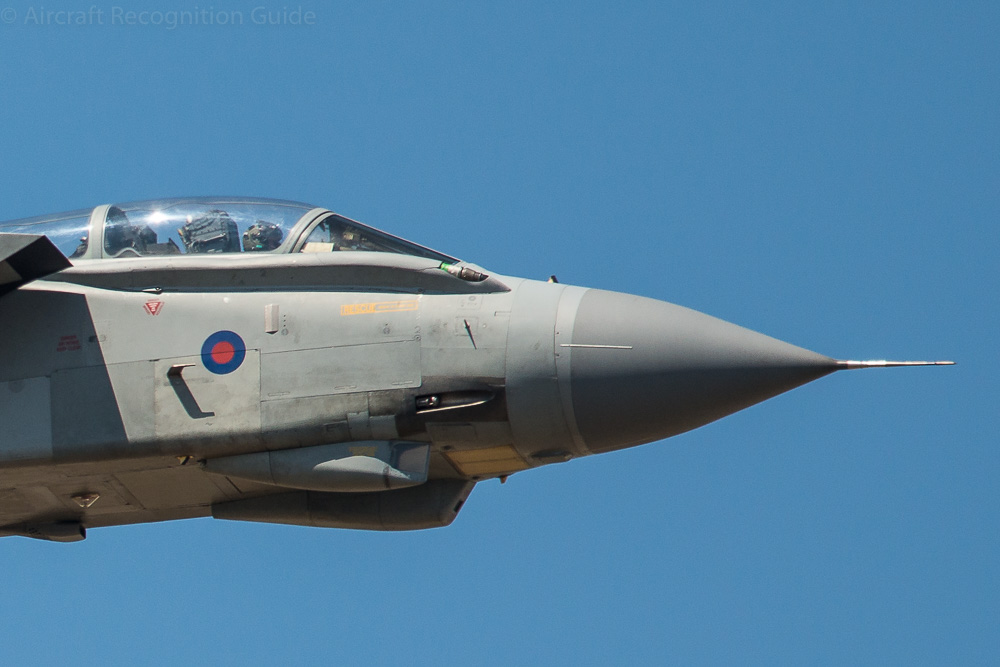 Detail of the two sensor pods underneath the forward fuselage of the Tornado GR4. 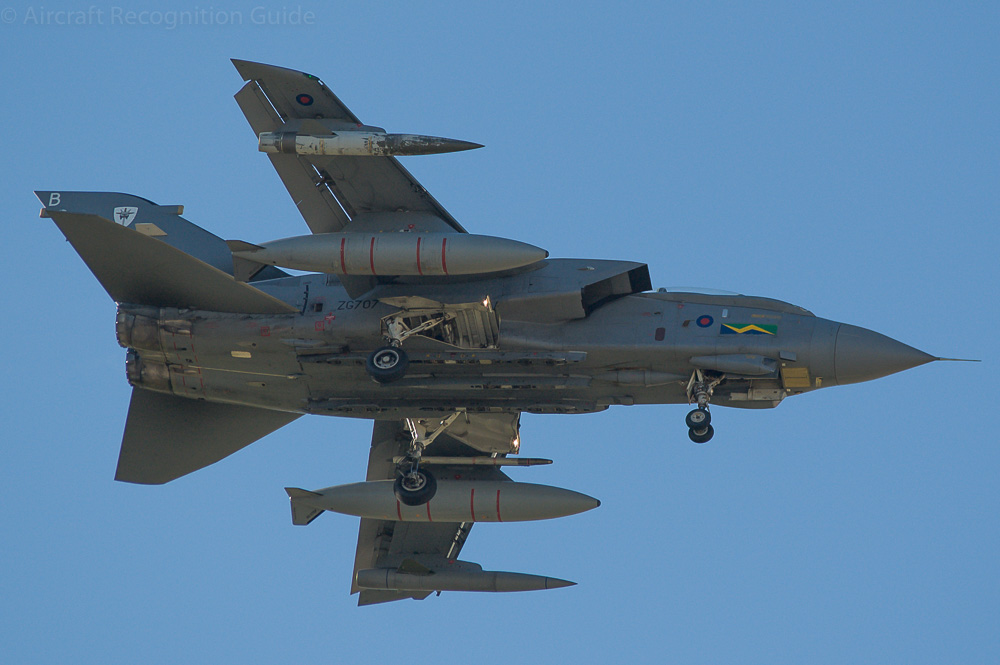 Tornado GR4As have the same sensors under the nose as the Tornado GR4, but no cannons.

ECR stands for electronic combat and reconnaissance. This version lacks the cannons of the IDS version. Compared to the cannon-less Tornado GR1A/GR4A it has no sensor pod(s) under the nose. 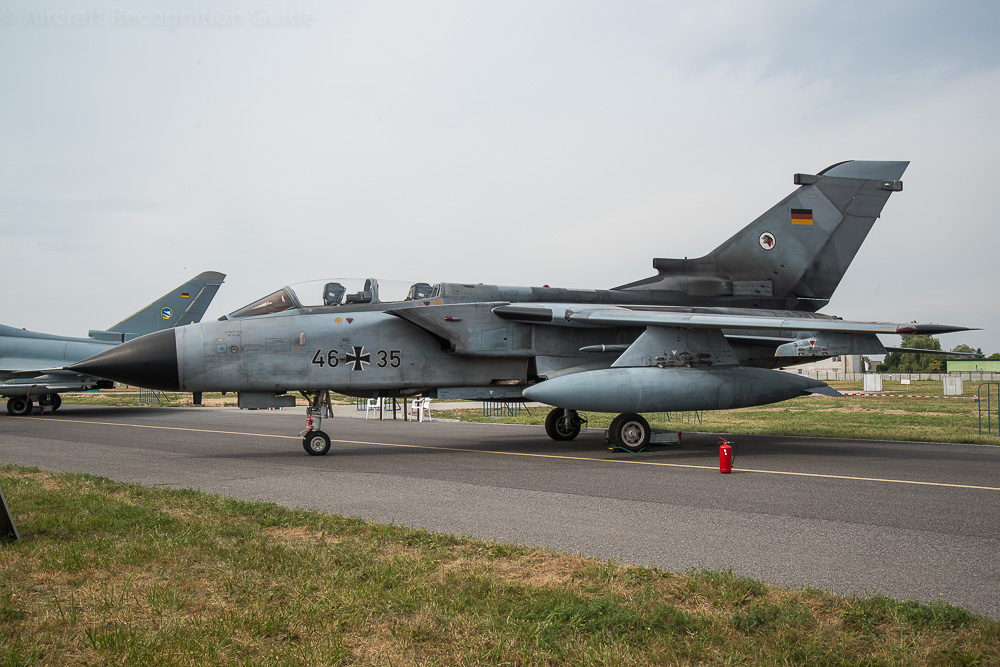 The left side of a Luftwaffe Tornado ECR. Note no cannon, no sensor pod under the nose. 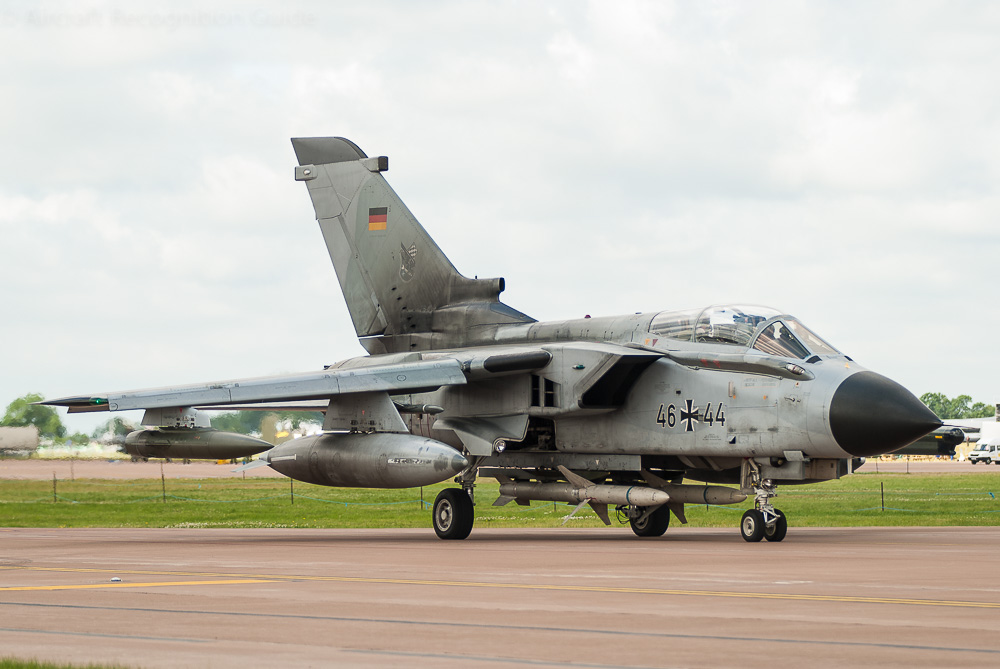 The final version was the air defense or ADV version, at first only devloped for the Royal Air Force, but also operated by Italy and Saudi Arabia. The ADV variant has a longer nose to house the different radar. Other differences are a greater sweep angle, the removal of the left cannon, no kruger flaps and a 1.36 m longer fuselage. The latter is visible when you look at the location of the air intake relative to the canopy. The air intake starts near the second canopy frame on the IDS/ECR and halfway the second cockpit on the ADV.

The Tornado F2 was the first model used by the RAF. Only eightteen were built of which one was converted to Tornado F2A, with only the engines of the F3. The most built ADV version was the Tornado F3, which can carry two Sidewinder missles under each wing (the F2 only one). Another difference is the pivot point of the horizontal stabilisers, where the attachment point to the fuselage. This is closer to the exhaust nozzles on the F2 than on the F3. 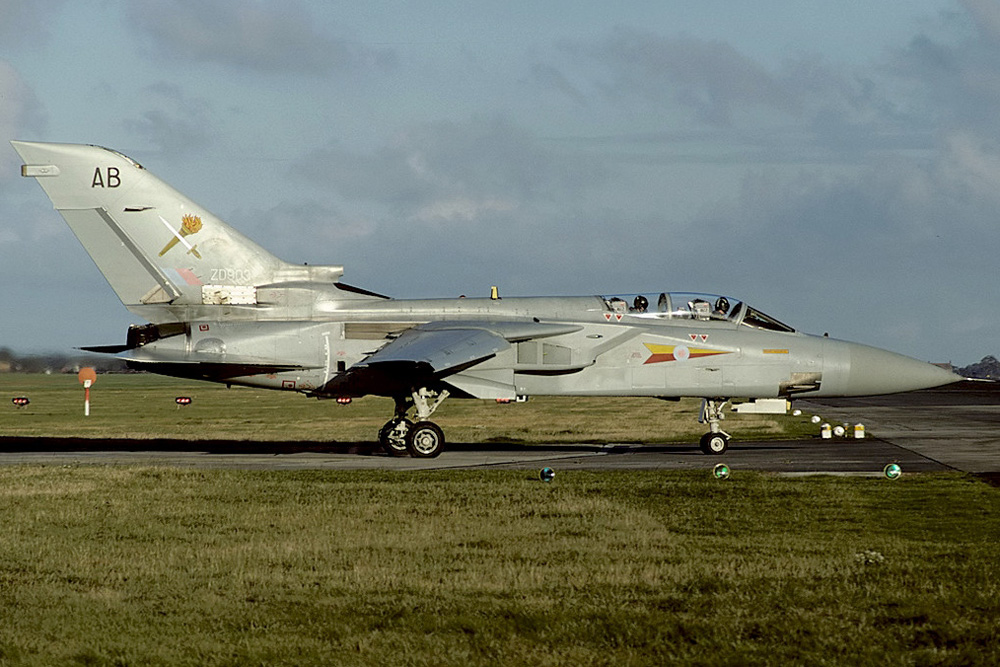 The Tornado F2 has a long nose, but the pivot point of the all moving elevators is as close to the exhaust as on the Tornado IDS and ECR. (photo WikiMedia/Mike Freer) 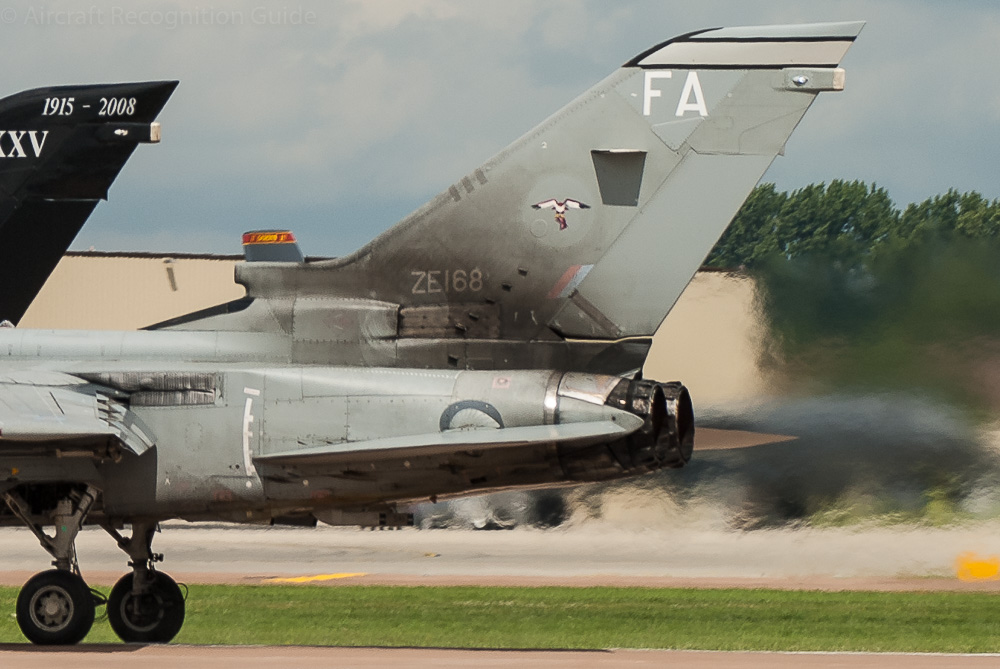 Detail of the Tornado F3 rear fuselage. Compare the pivot point of the hirozontal stabiliser with that of other Tornado versions. 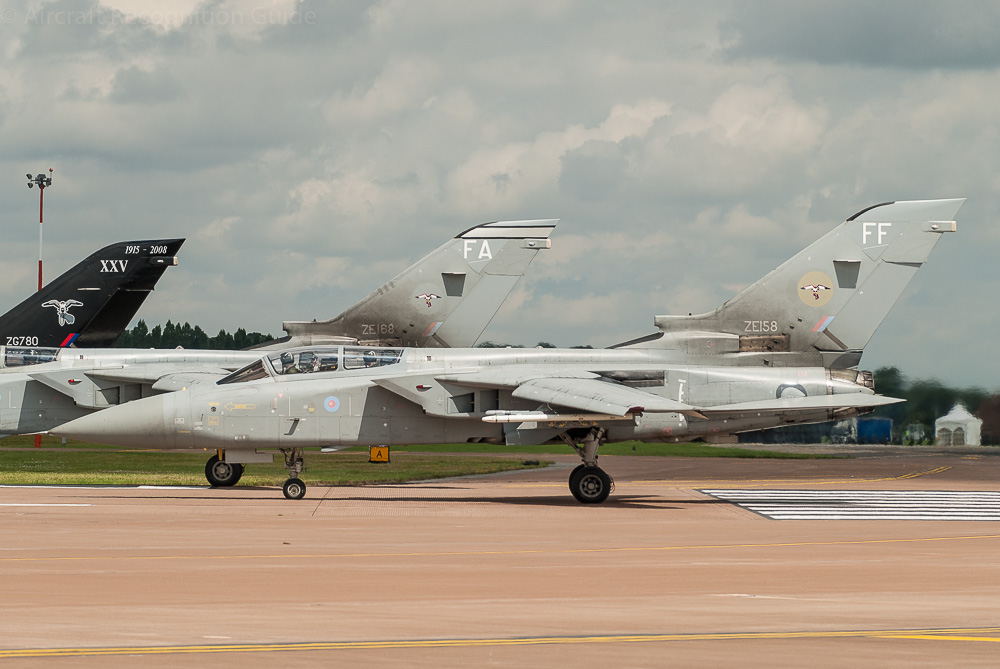 A full side view of a Royal Air Force Tornado F3. 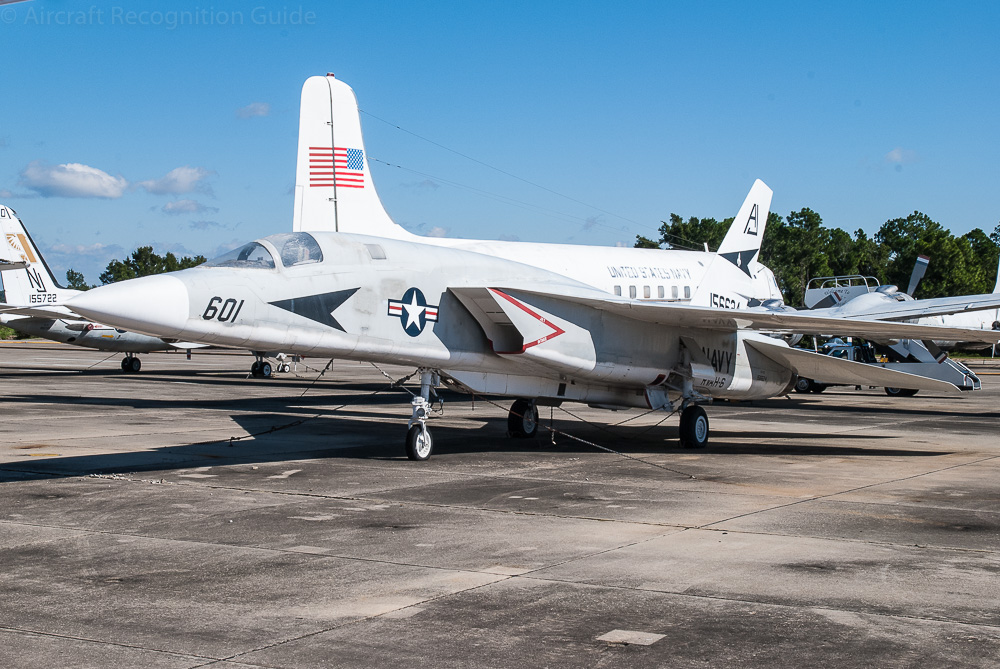 The Vigilante has two engines, wedge shaped air intakes and a single vertical stabiliser like the Tornado. However, the wings have no variable sweep. Also the Vigilante is longer and has a more slender look. 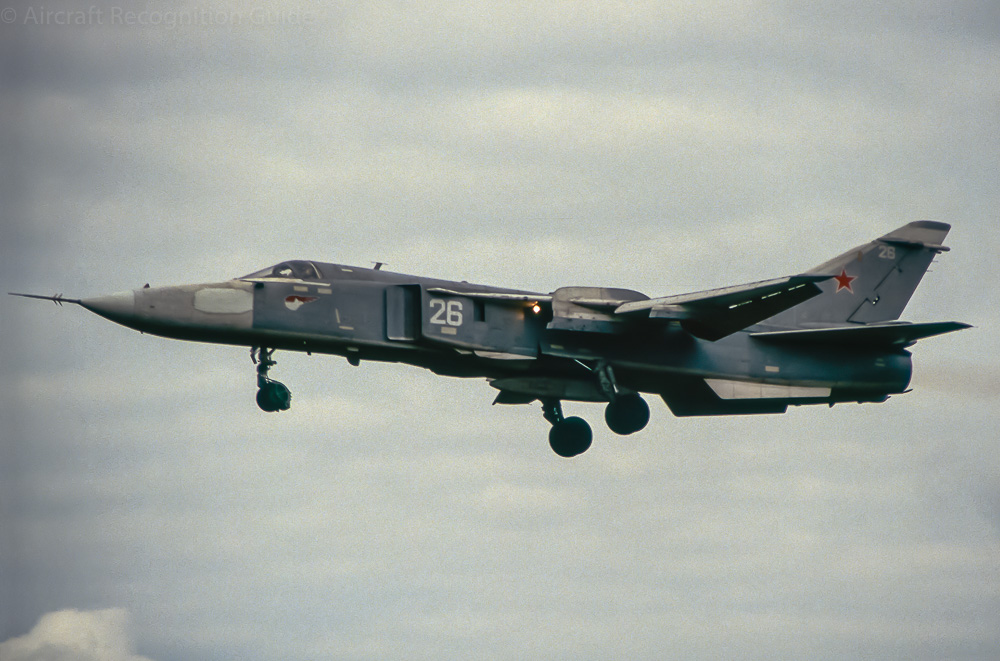 The Tornado and Fencer both have variable sweep wings, mounted high, two engines and one vertical stabiliser. The wedge shaped air intakes of the Su-24 are tilted 90 degrees though and the main landing gear has two wheels. The two pilots sit side-by-side, not in tandem. 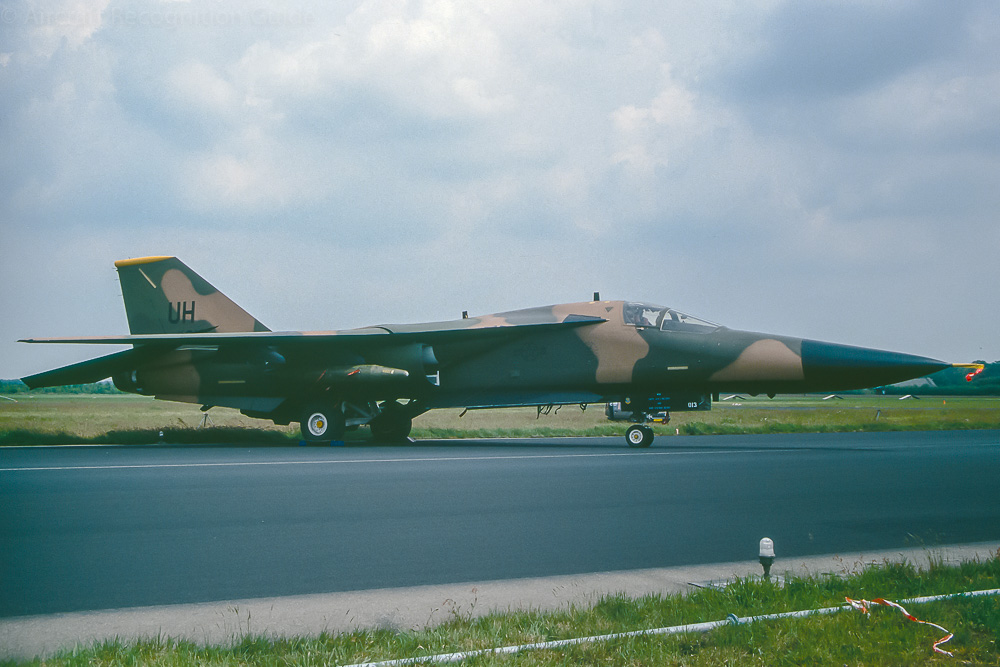 An F-111 is more similar to a Su-24 than a Tornado, as they both have a side-by-side cockpit. The air intakes are different, both compared to the Su-24 and Tornado; they have the shape of a quarter circle. 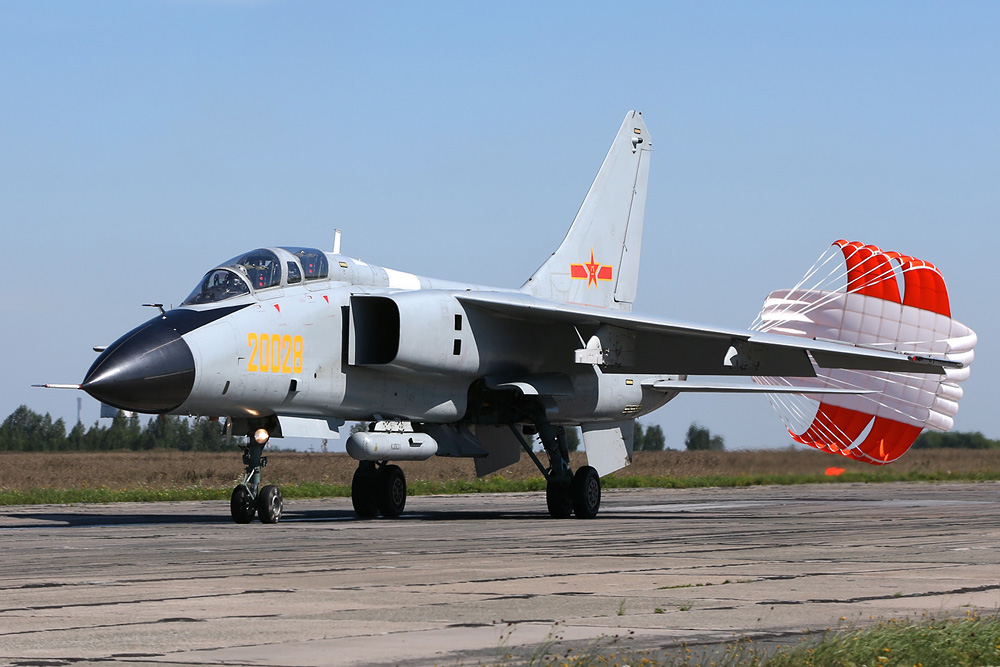 This Chinese fighter/bomber has in general the same appearance as the Tornado, but lacks variable sweep wings and has different air intakes. The JH-7 has a tandem cockpit as standard though. (photo WikiMedia/Dmitriy Pichugin)