The United States Air Force's largest transport aircraft was the result of a request of the US government to four aircraft manufacturers. Boeing responded with what later became the Boeing 747, Lockheed with the model L-500. In 1965 Lockheed was announced as winner.

Lockheed's design was a high wing aircraft with a T-tail and a much larger diameter fuselage than the Starlifter. The cockpit was placed well above the cargo area to enable cargo loading through a nose door. The Boeing 747 has a pod on the top of the fuselage containing the cockpit. Lockheed chose to extend the cockpit profile down the length of the fuselage, giving it an egg-shaped cross section. This is well visible when viewing the aircraft from the front. At the rear the fuselage slopes up and ends in a pointed tail cone. The T-tail has a small bullet fairing at the top, with the horizontal stabilisers having a small anhedral. The landing gear has four six-wheel bogeys and a nose gear with four wheels on one axis, like on the Ilyushin 76. 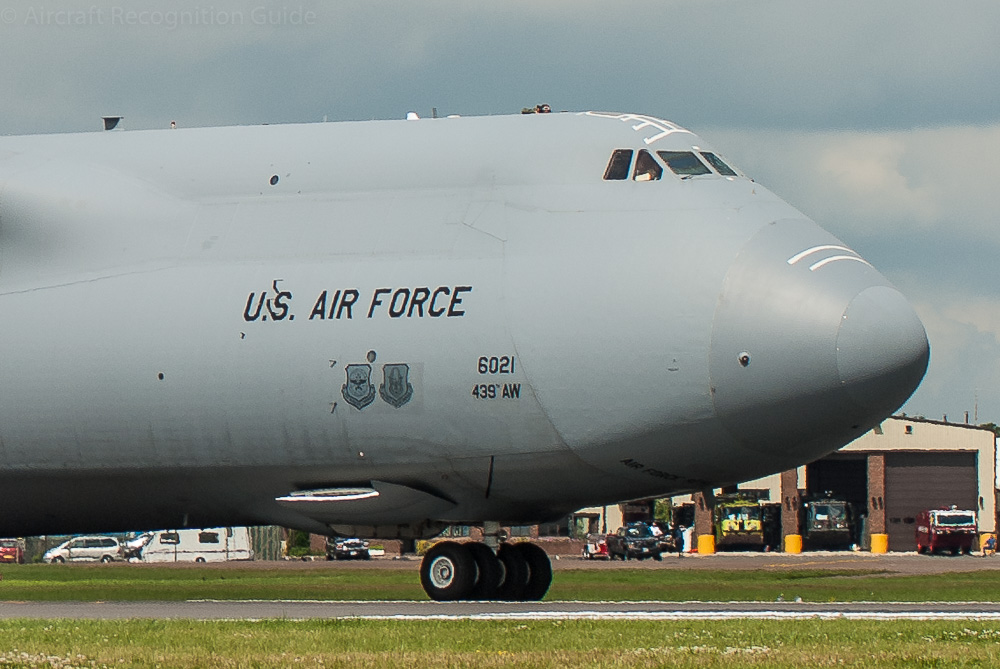 The cockpit of the C-5 is placed above the nose cargo door. The resulting egg-shaped fuselage cross section is somewhat visible here. Note the four-wheel nose gear. 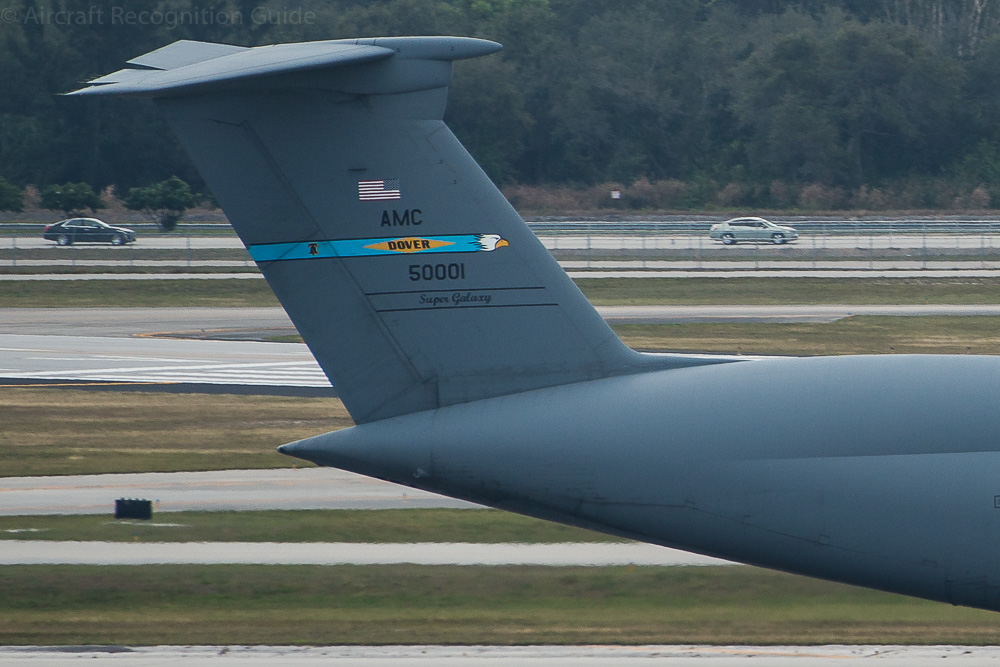 The T-tail has modest bullet fairing on top. Below is a pointed tail cone.

The original version was the C-5A, built between 1969 and 1973. Several improvements were made to the C-5As, not in the least to the wing structure, to increase the performance of the aircraft. In the early 1980 Lockheed delivered fifty newly built C-5Bs, which incorporate all the changes to the original C-5A as well as a simplified landing gear, upgraded engines and updated avionics. Both versions look equal on the outside. They both have General Electric TF39 engines. 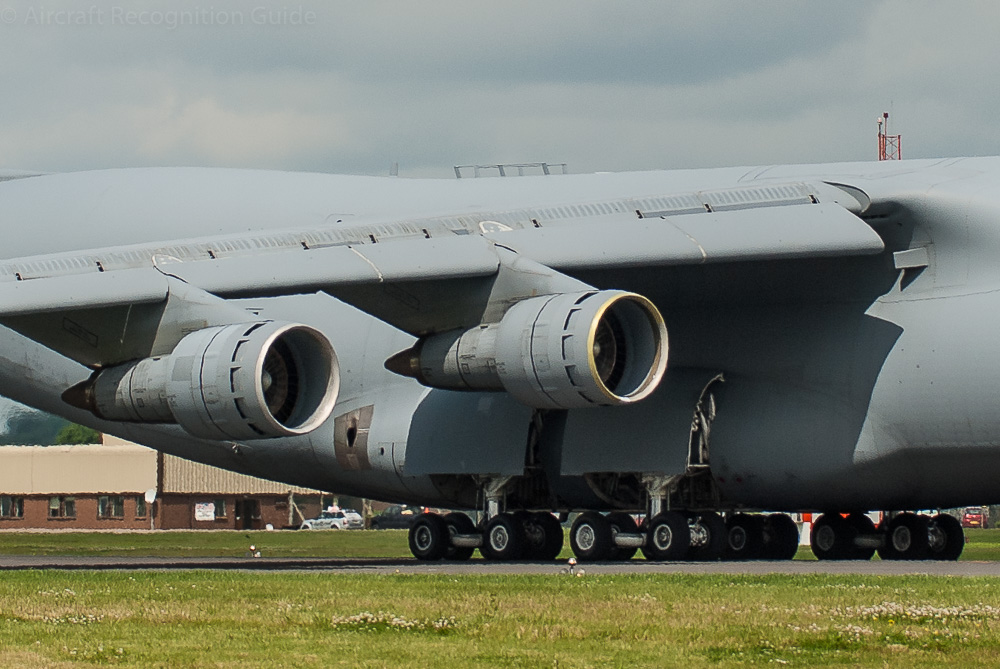 Two C-5As were modified as C-5C, for transporting large, outsize cargo. The main difference visible on the outside is the rear cargo door that is split in the middle. Other differences are inside. Note that the version is also referred to as as C-5A(SCM) - Space Cargo Modified.

The split rear cargo door of the C-5C.

To extend to useful life of the remaining C-5B and C-5C aircraft, they were all modified to C-5M. On the outside the largest change is visible: the old TF39 engines have been replaced by General Electric F138 engines, otherwise known as CF6-80C2 in their civil disguise. Inside the cockpit has seen most improvements, that already started with the C-5 Avionics Modernization Program (AMP). 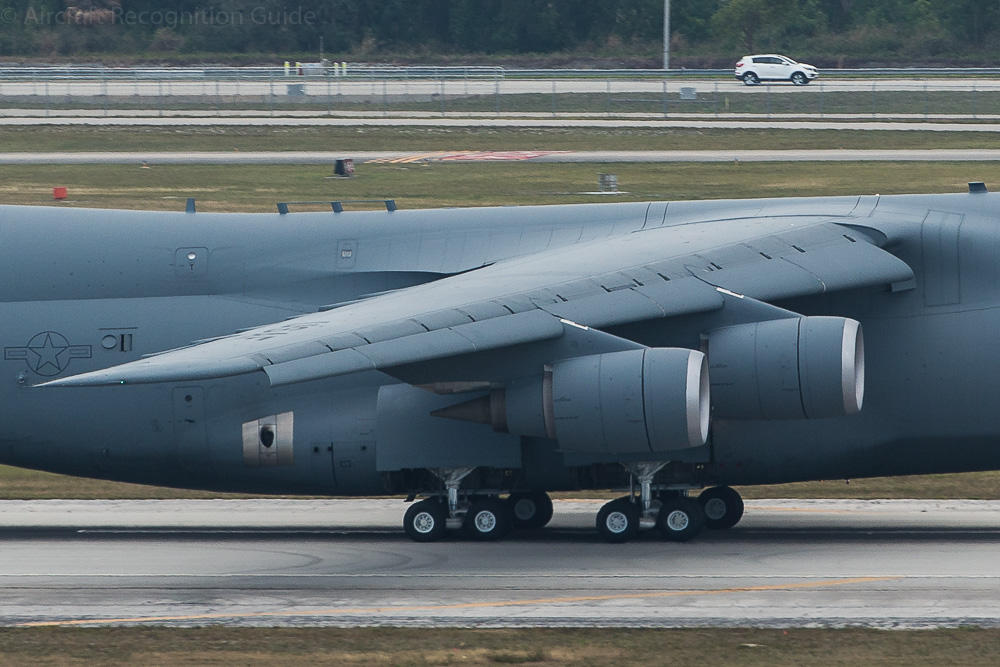 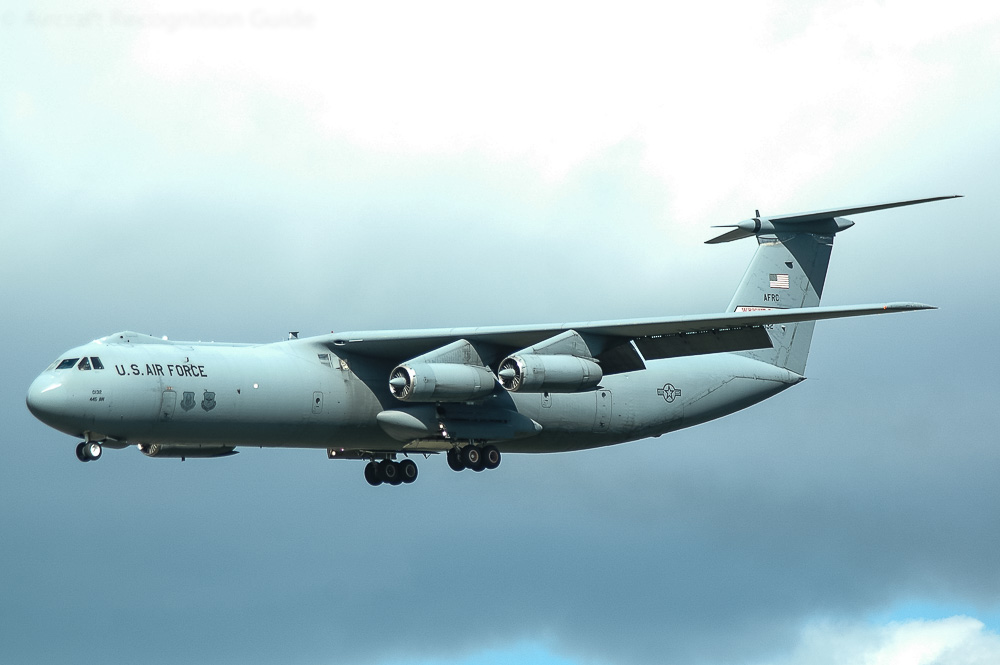 Lockheed clearly used elements of the C-141 Starlifter in the C-5 Galaxy, such as the cockpit windows and vertical stabiliser (although that is smaller than of the C-141). Furthermore the fuselage of the Starlifter is much narrower, it has more slender engines and fewer wheels on the landing gear.. 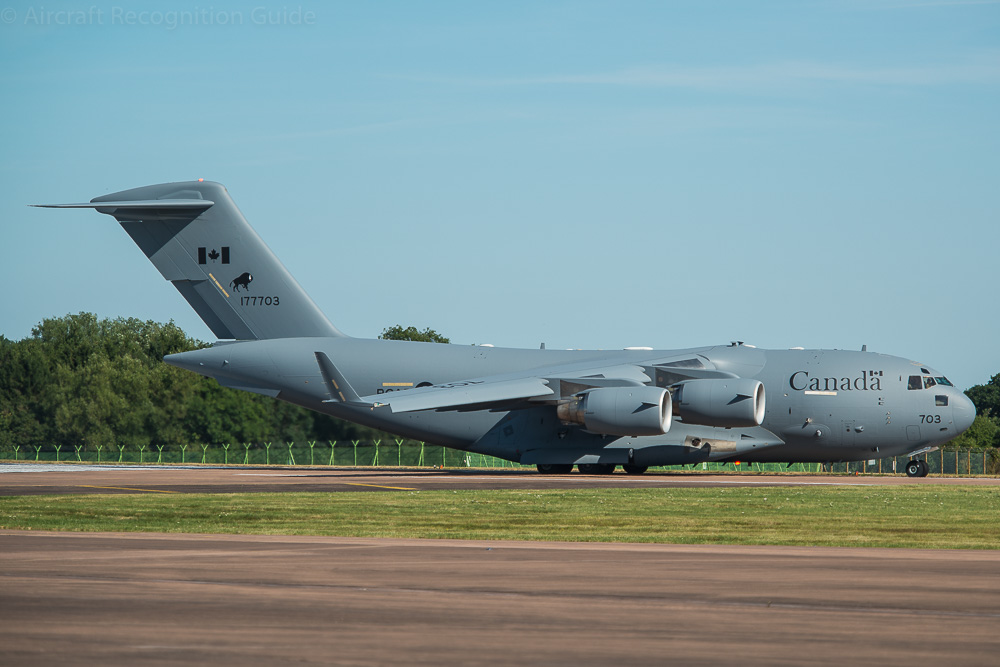 While the C-17 has a similar pointed tailcone as the Galaxy, the differences are numerous: the C-17 is smaller, has winglets, different cockpit windows, fewer wheels and no bullet fairing on top of the vertical stabiliser, to name a few. 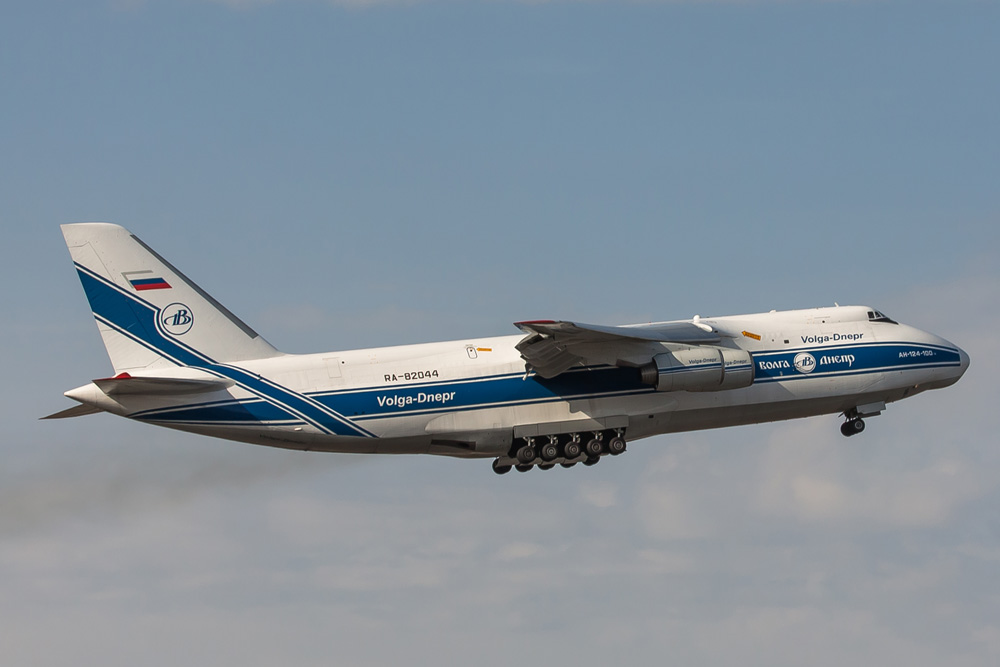 The An-124 is similar in size as the C-5 and also has an egg-shaped fuselage cross section and a cargo door in the nose. However, there is one big difference, namely the location of the horizontal stabiliser: this is attached to the fuselage instead of on top of the vertical stabiliser. Together with the landing gear this makes distinction easy.