The Lockheed JetStar is one of the first bizjets, but it is actually a spin-off from a military aircraft. The JetStar was the winner of the UCX competition of the USAF, where it served as the C-140.

Originally the aircraft was envisioned with two jet engines attached to the rear fuselage. The two prototypes, designated L-329, were equipped like that. However, a deal about producing the British engine in the USA fell through. The production version (L-1329) was therefore powered by four turbojets, also mounted at the rear of the fuselage in pairs. This makes the aircraft unique in its class. The JetStar also has large external fuel tanks attached to the wings, which is also an unmissable feature to distinguish it other bizzers. 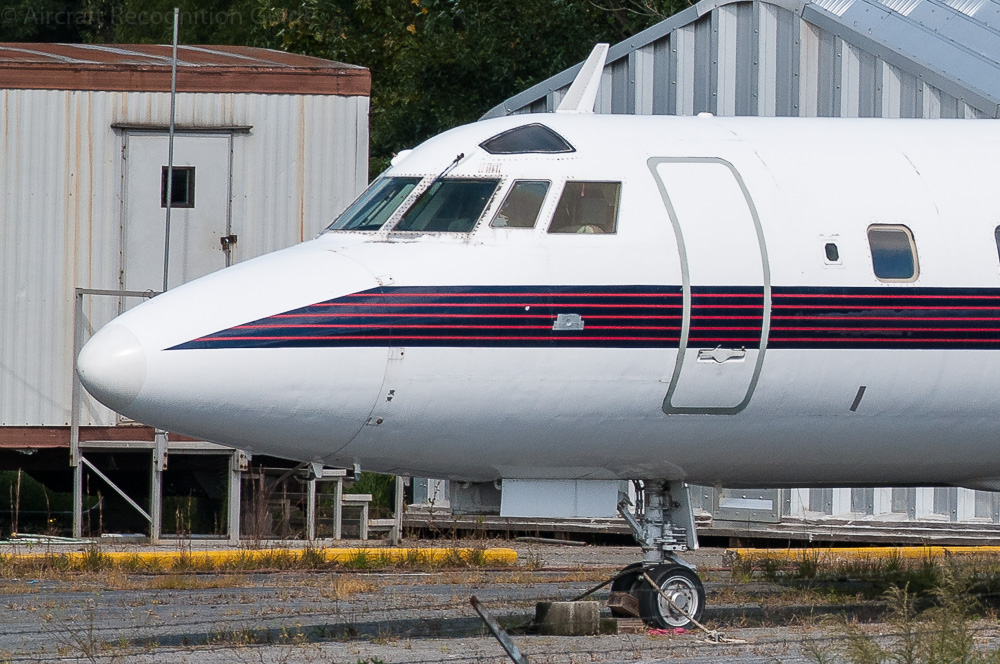 The nose of the JetStar, with its typical triangular eyebrow window. 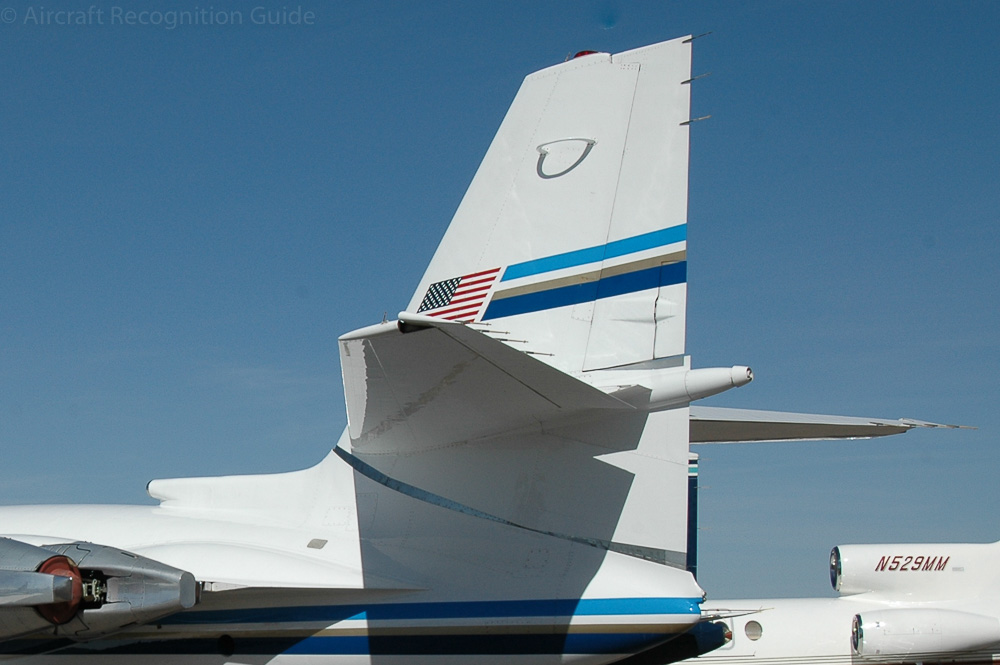 The tail of the JetStar has a cruciform shape.

The prototype of the JetStar has two Bristol jet engines. Additionally, it has no eyebrow windows and no external fuel tanks attached to the wings. For the rest it look just like the well-known four engined JetStar. 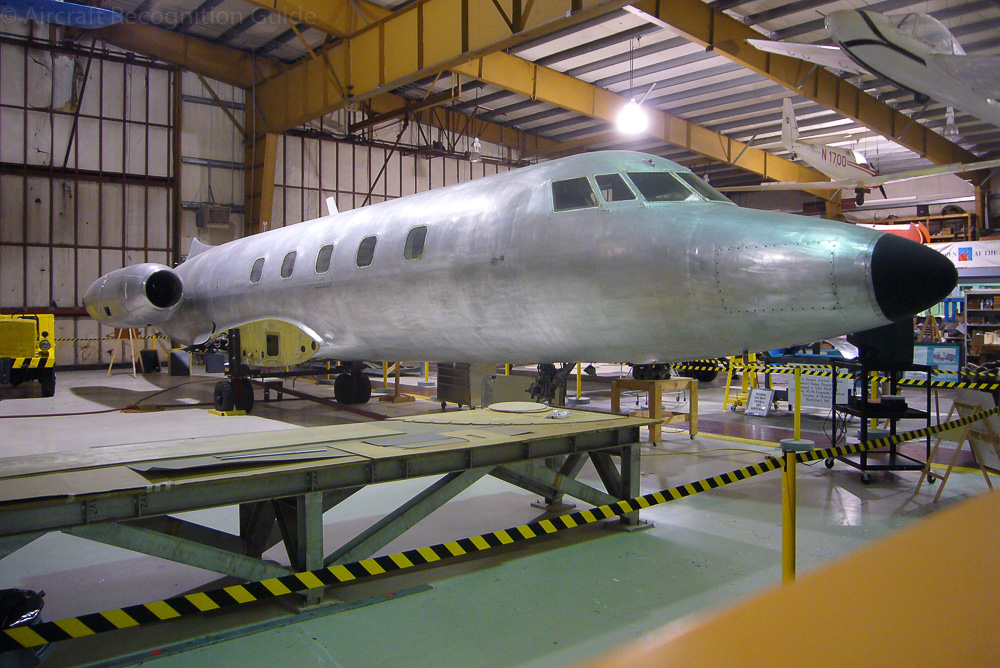 Although on the photo it is not complete, the key characteristics of the L-329 are clearly visible: two engines and no eyebrow cockpit windows.

The production version was powered by four Pratt & Whitney JT12D-6 turbojets attached to the rear of the fuselage in pairs. The JetStar 6 also has large external fuel tanks attached to the wings, with the wings sticking right through the tanks.

The JetStar 8 differs from the JetStar 6 by its JT12D-8 engines, but you cannot see that from the outside.

There were three military versions:

A US Navy version was to be called UV-1, but this was not built. 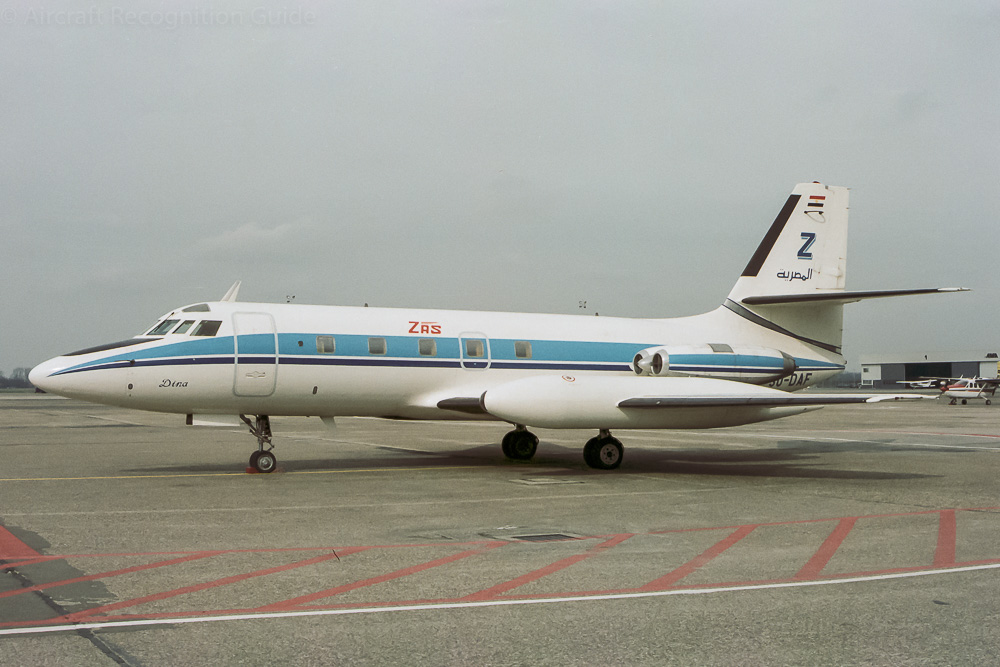 The JetStar 6 with slim engine nacelles and slipper fuel tanks with wings going through it. 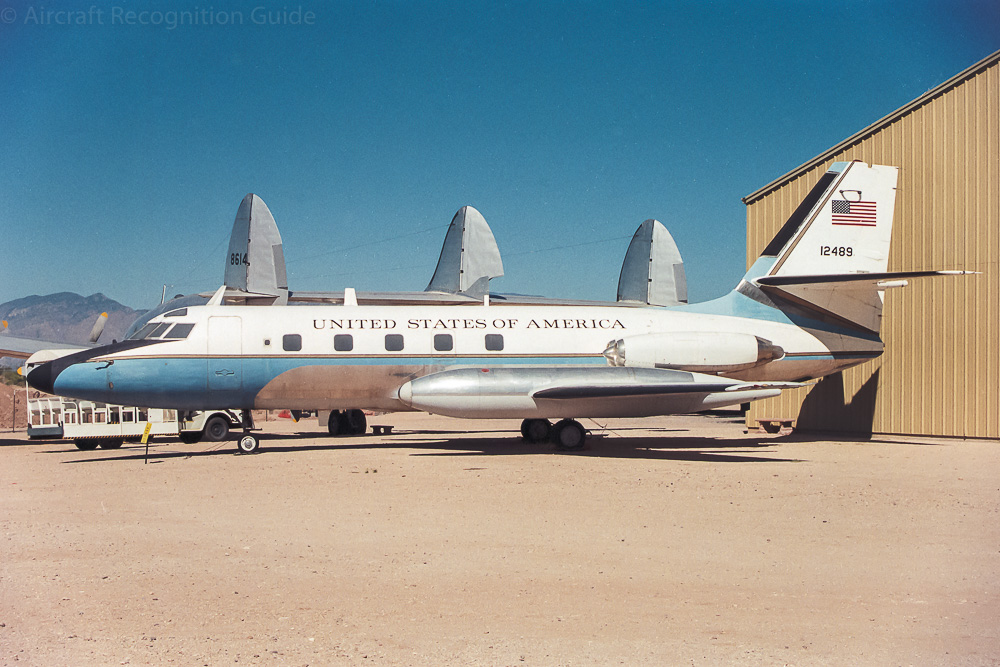 The USAF military VIP version of the JetStar is designated VC-140B.

The JetStar got a second life with less noisy TFE731 engines, still attached in pairs to the rear fuselage. These engines have a large diameter and big fairings for thrust reversers. Also there is a larger oval body in between the engines. The JetStar II has slightly larger external fuel tanks, which more or less hang underneath the wings. Finally, the JetStar II has a small air intake in the dorsal fin. 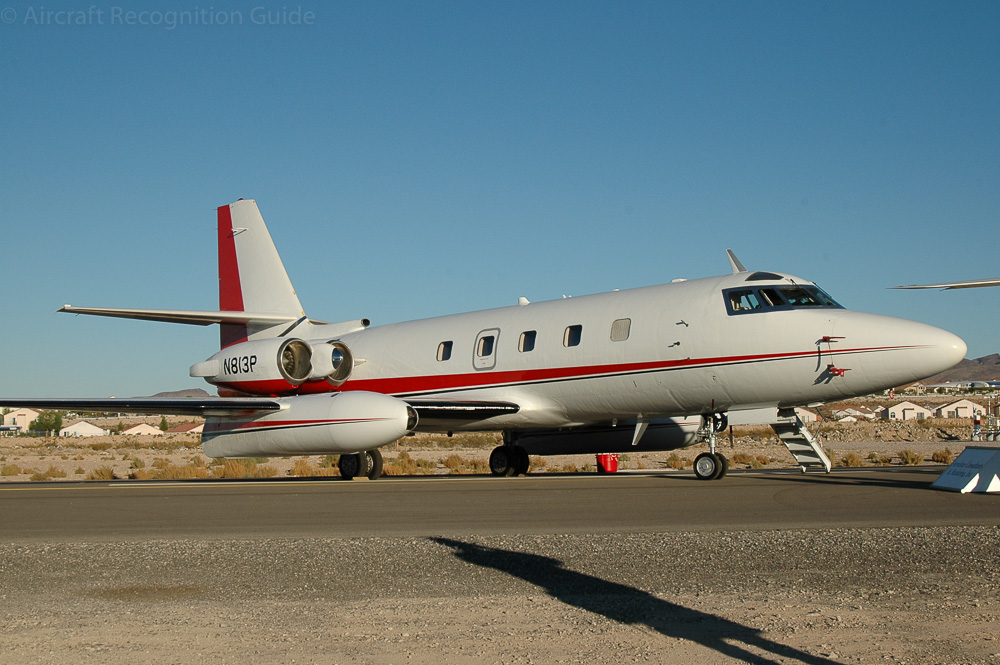 A full view of a JetStar II, with external fuel tanks under the wings and larger diameter engines. Note the small air intake in the dorsal fin.

At the same time the Lockheed put the Jetstar II to the market (see above), AiResearch offered a modification that converts old JetStars with the four TFE731 turbofan engines and larger external fuel tanks of the JetStar II. However, the air intake in the dorsal fin was not included. That detail makes a JetStar 731 distinguishable from the JetStar II. 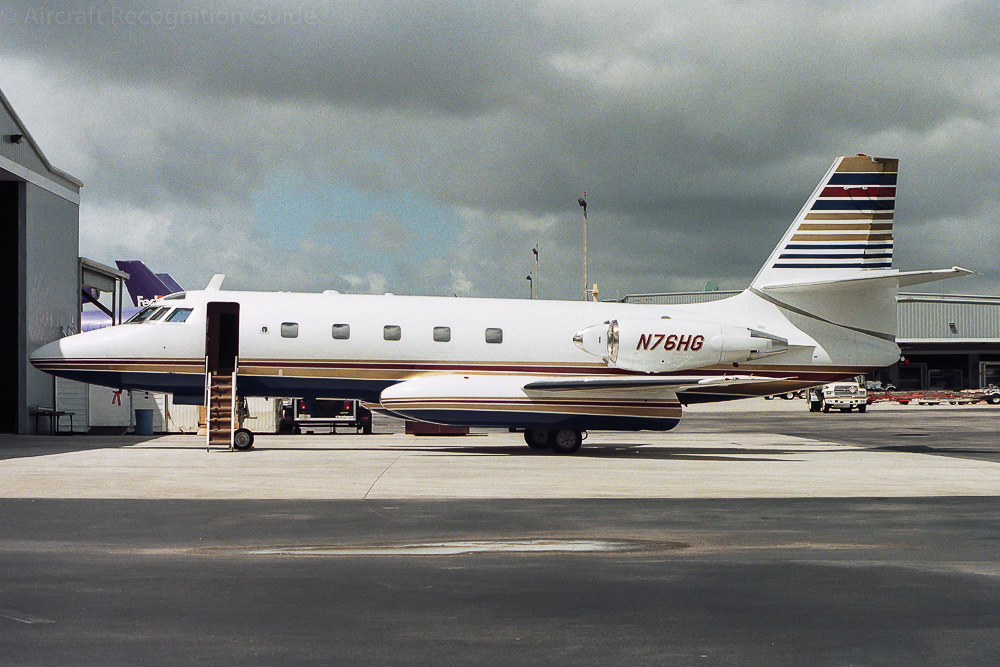 The JetStar 731 has nearly all the elements of the JetStar II, except the air intake in the dorsal fin, as shown here.

Another attempt to give the JetStars a second life was done by American Aviation Industries (AAI). This company converted a JetStar 8 with two General Electric CF34s, the same engine type used on the Canadair Challenger 601. The nacelles of the resulting FanStar have the same shape. Unlike the JetStar II and JetStar 731 the FanStar retained the original fuel tanks centered around the wings. 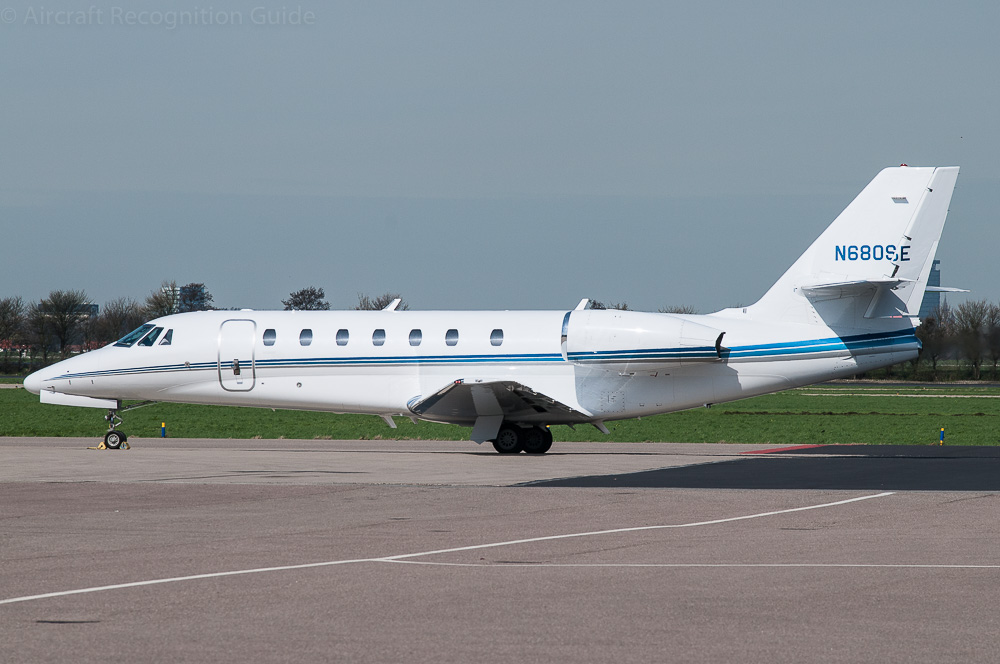 The four engines attached in pairs to the rear fuselage, large tanks under the wings and a cruciform tail are unique for the Jetstar, but the twin engine Citation Sovereign comes closest in appearance, especially for the L-329. However, the Citation has different cockpit windows and no tanks attached to the wings. 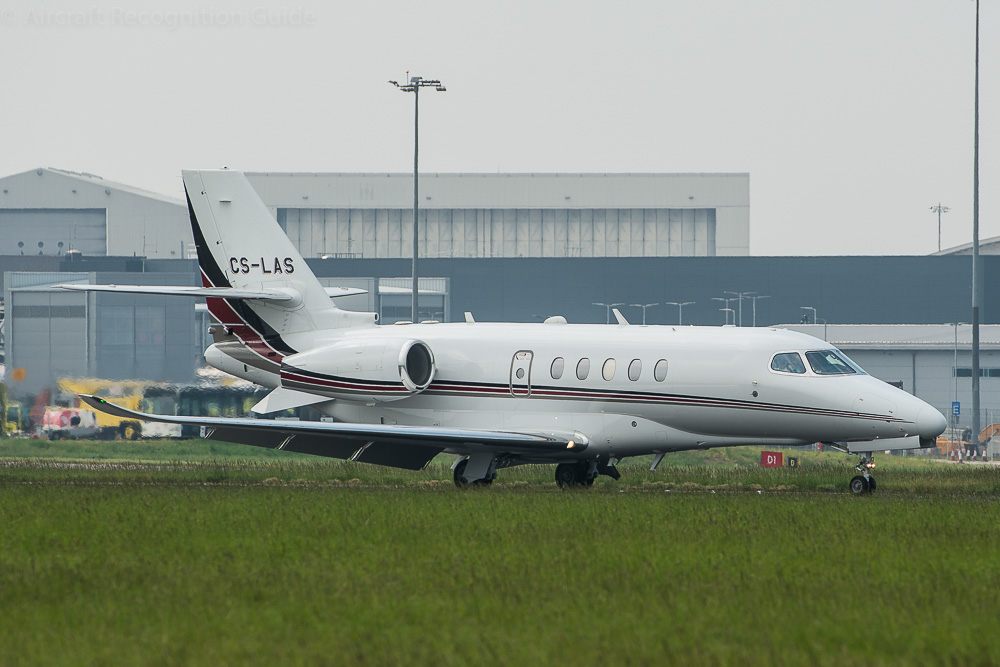 The same applies to the Citation Latitude, which has a tail even more similar to that of the Jetstar than the Citation Sovereign.