The Challenger 601 business jet formed the basis for a whole family of regional jets, known as the Canadair Regional Jet (CRJ). The first, fifty seat CRJs are essentially stretched versions of the Challenger 600 series, although internally there are many more differences to make the aircraft ready for many short flights a day. They have the same, very streamlined nose with narrow, rounded cockpit windows. The first versions also had the same tail and engine shapes, but that changed with further stretches of the fuselage. 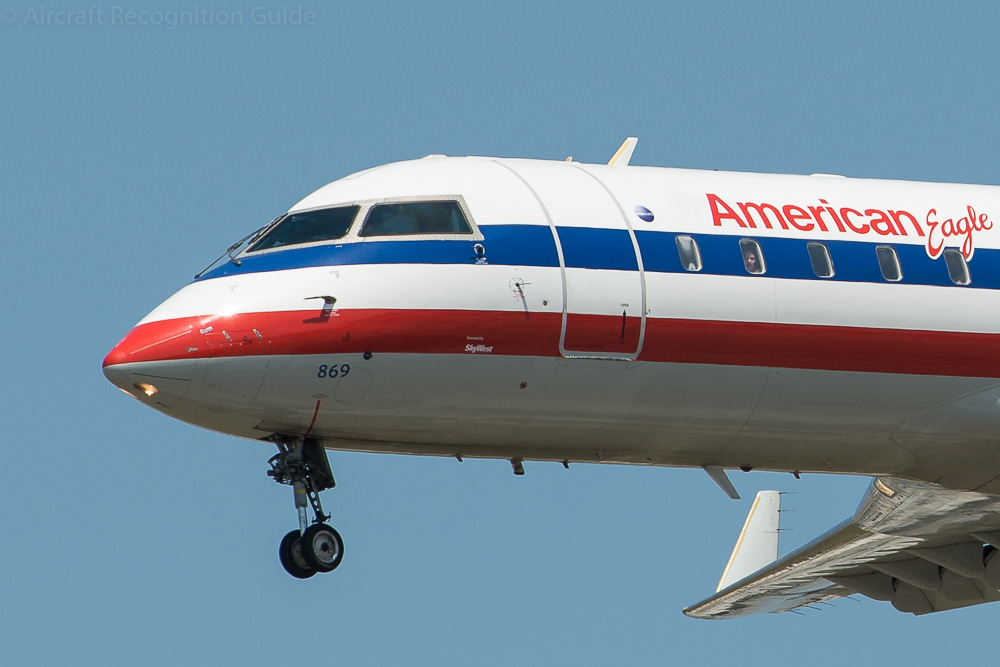 Nose of Challenger Regional Jet 100/200 series, with slim cockpit windows. It is essentially the same as that of the Challenger.

This is the original version, with the same engine nacelles and short blunt tail cone as the Challenger 601. Series 100 and 200 differ in engine version, but without external differences. Furthermore there are ER and LR subversions of the CRJ100 and CRJ200, with more fuel capacity and aircraft weights. The CRJ440 is certified for a maximum of 44 passengers, hence the marketing name. 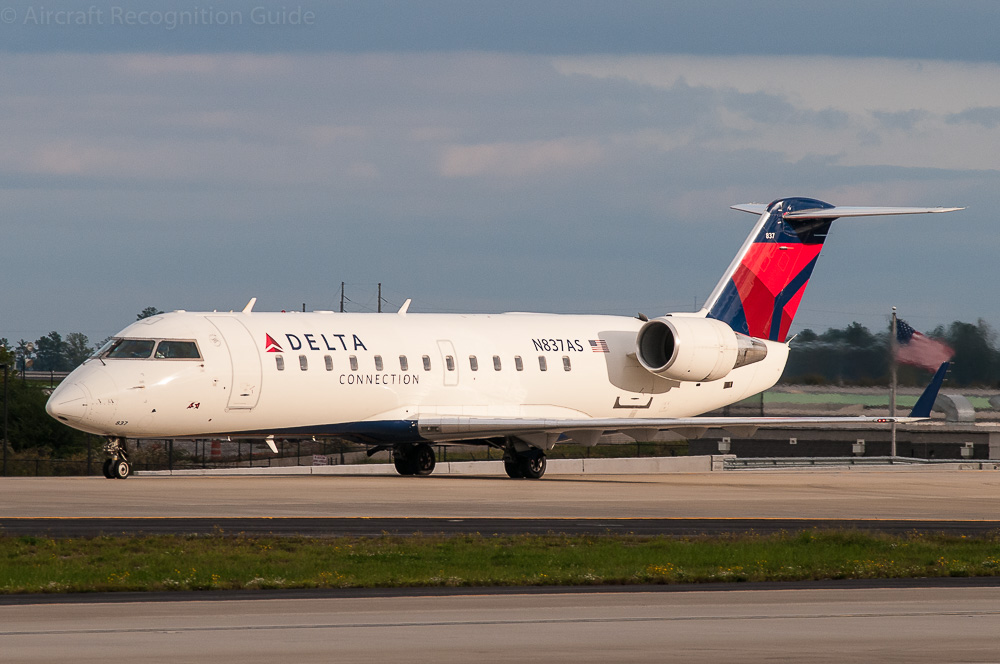 This Canadair Regional Jet 200ER is the first of the family. 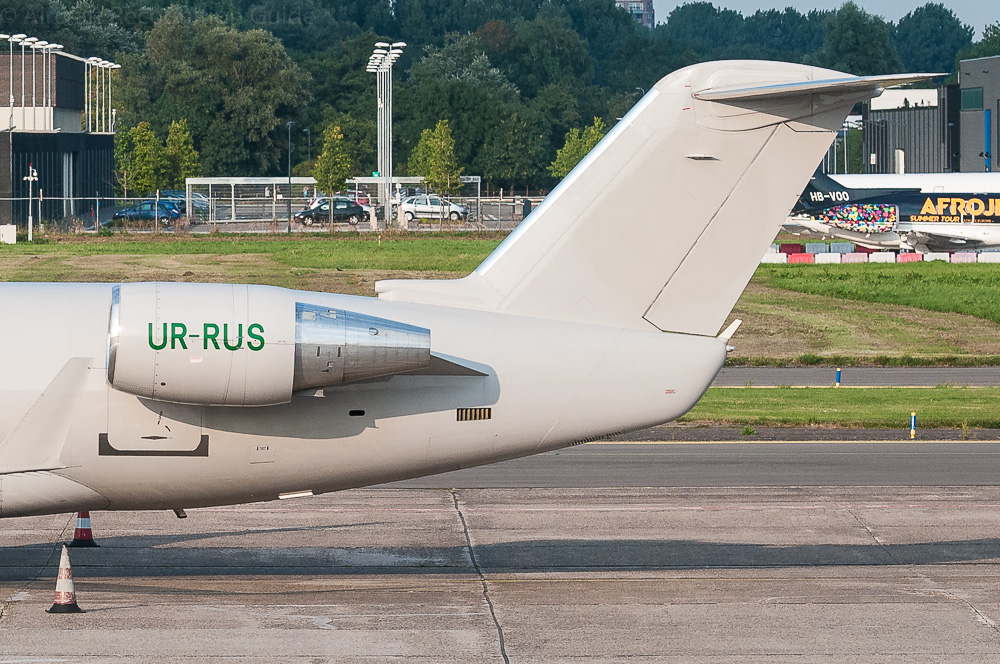 The engine nacelles, tail and tail cone of the CRJ100 & CRJ200 are the same as those of the Challenger 601.

As Bombardier was already a well known name in the bizjet world, it was no surprise that they made a corporate jet version of the CRJ. Essentially it is a standard CRJ200 with extra fuel tanks and a luxurious interior. The first versions were known as Canadair Special Edition (SE). Later marketing names were Challenger 800 and Challenger 850. From the outside they cannot be recognised from airline versions. 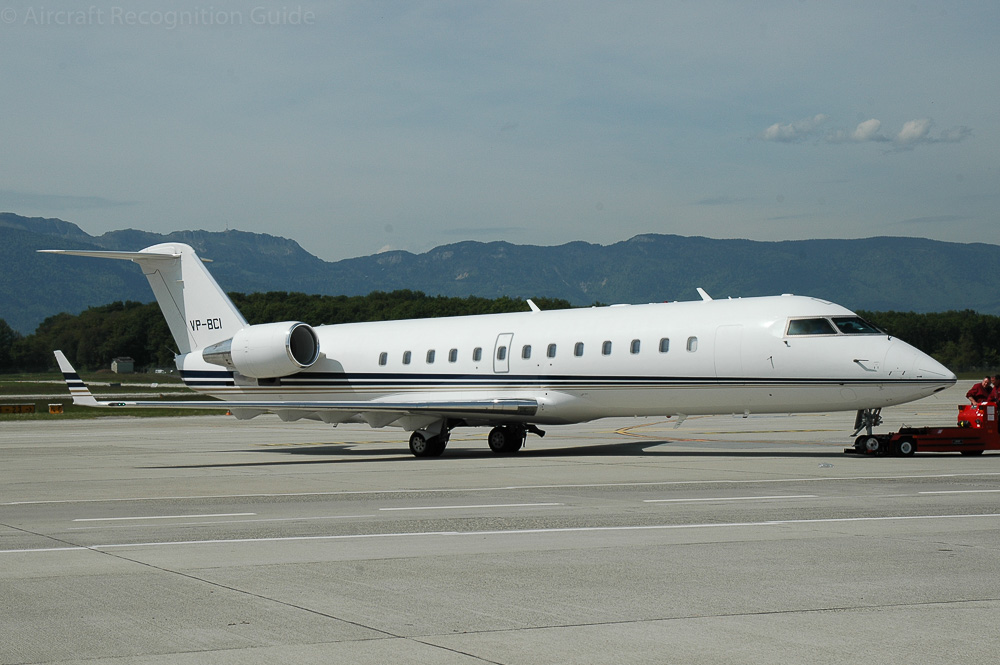 Only from the paint scheme and Bermudan registration you may guess that this is a Challenger 800 corporate jet. 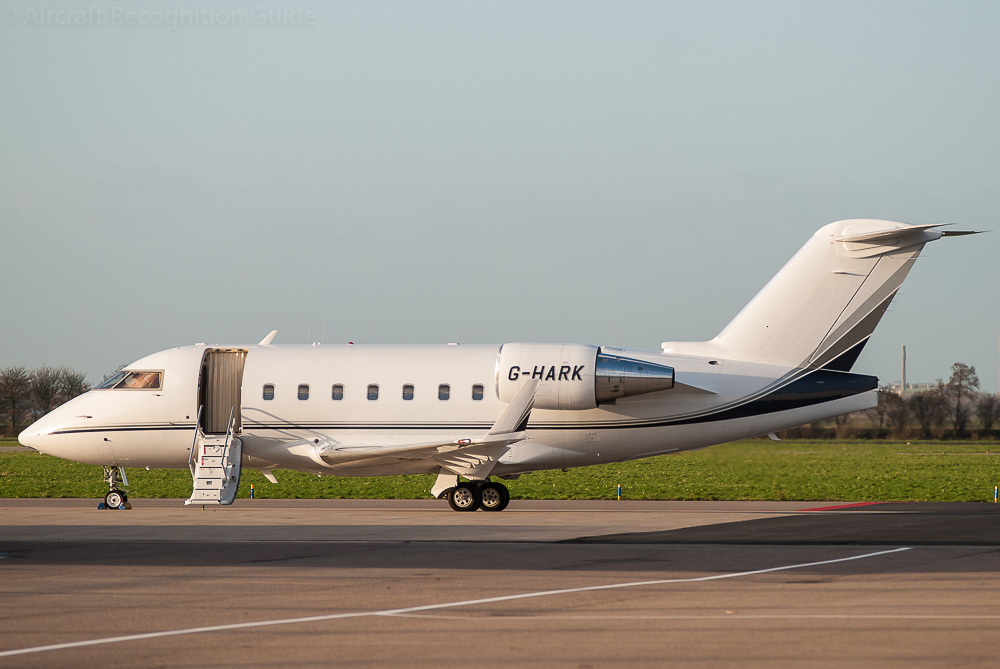 This is the basis for the regional jet aircraft, the Challenger 600 series. Externally the biggest difference is the length: the CRJ is much longer than the Challenger. Other differences may be in the tail cone. 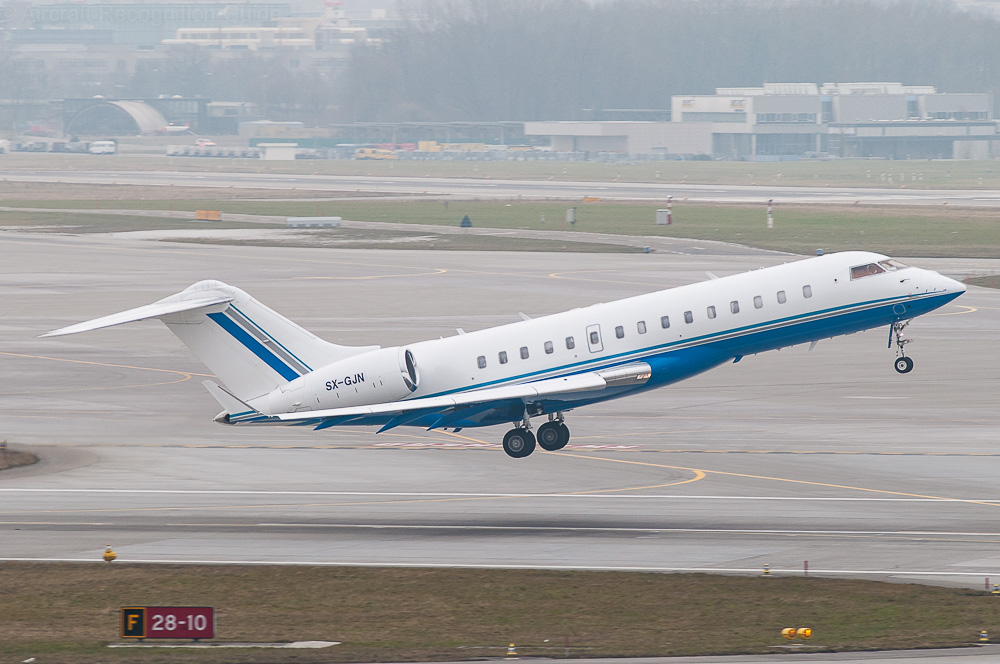 The Global series has more in common externally with the Regional Jet 700 (and 900/1000), given the length. However the Global series have engine nacelles without a separate fan exhaust. Also the tailcone is a bit different. 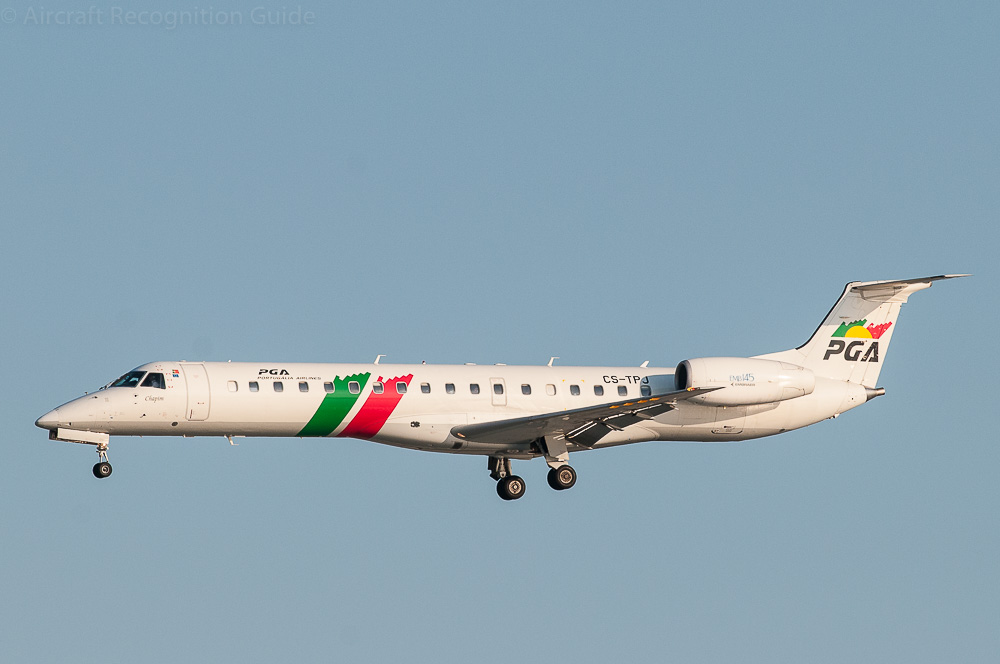 The biggest competitor of the Canadair Regional Jet, in particular the Series 100 and 200, is the EMB145 series. The biggest external differences are the cockpit windows, the pointed tail cone with APU exhaust pipe, engines without separate fan exhaust and the bigger dorsal fin.

CRJ200s converted to package freighter are known under the marketing name CRJ200PF. They have lost their cabin windows and these have been replaced by metal plugs. The 200PF conversions have no cargo door, all packages are loaded and unloaded through the main cabin door. 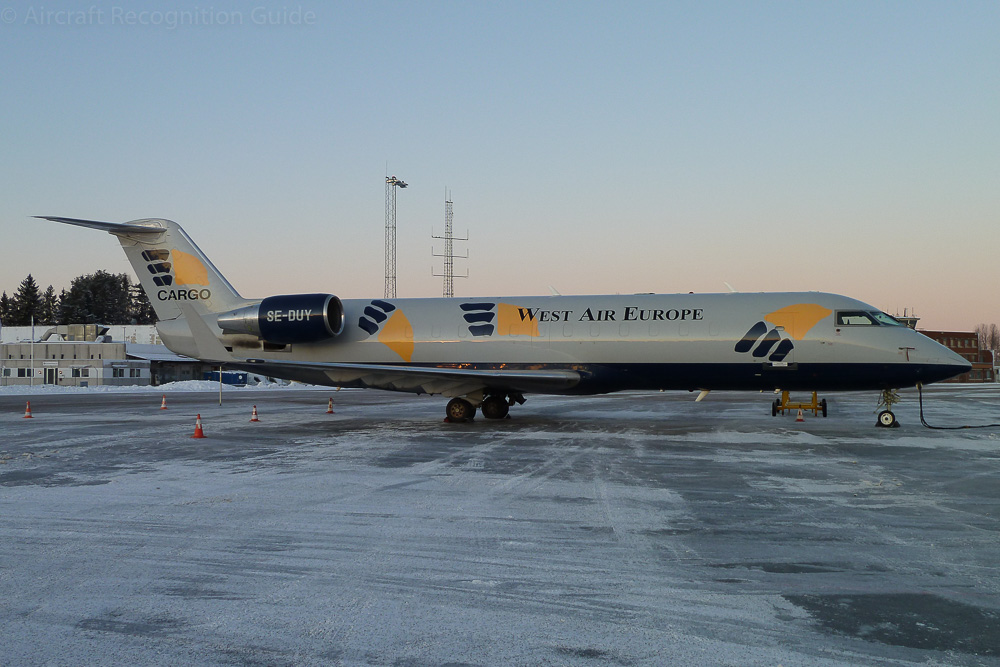 From the right side you cannot distinguish this Regional Jet 200PF from the 200SF, because the cargo door would be in the left side. 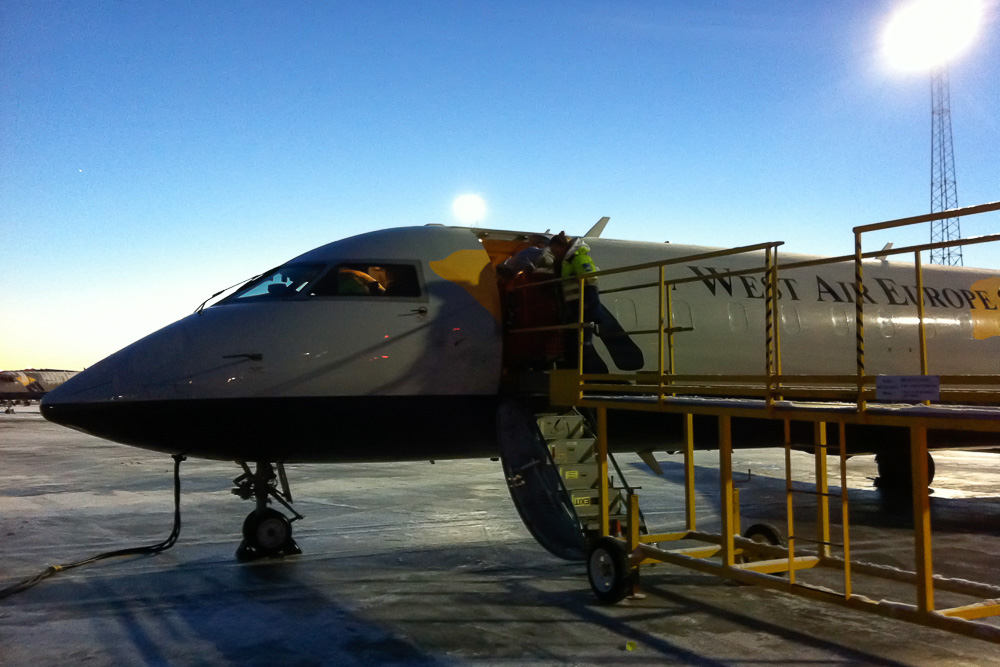 Loading of packages through the main cargo door of the CRJ200PF.

This version is the same as the 200PF, except that it has a large cargo door in the left forward fuselage. Aircraft converted as such have the marketing name 200SF (Special Freighter).

Starting with the Series 700 the aircraft has a different look, apart from being longer. Leading edge slats are fitted to the wing, which retain the winglets perpendicular to the wings. The tail cone is more pointed and has an APU exhaust. The engines now have a plug in the core exhaust. Finally, the vertical stabiliser is a bit beefed up. There is one overwing emergency exit on the 700 series aircraft.

There are three main subtypes (700, 701 and 702), differing in maximum number of passengers. Each can be had in standard, ER and LR versions, each with more fuel capacity. The Series 550 is a Series 700 on the outside, but with a maximum of 50 seats and a lower maximum take-off weight. 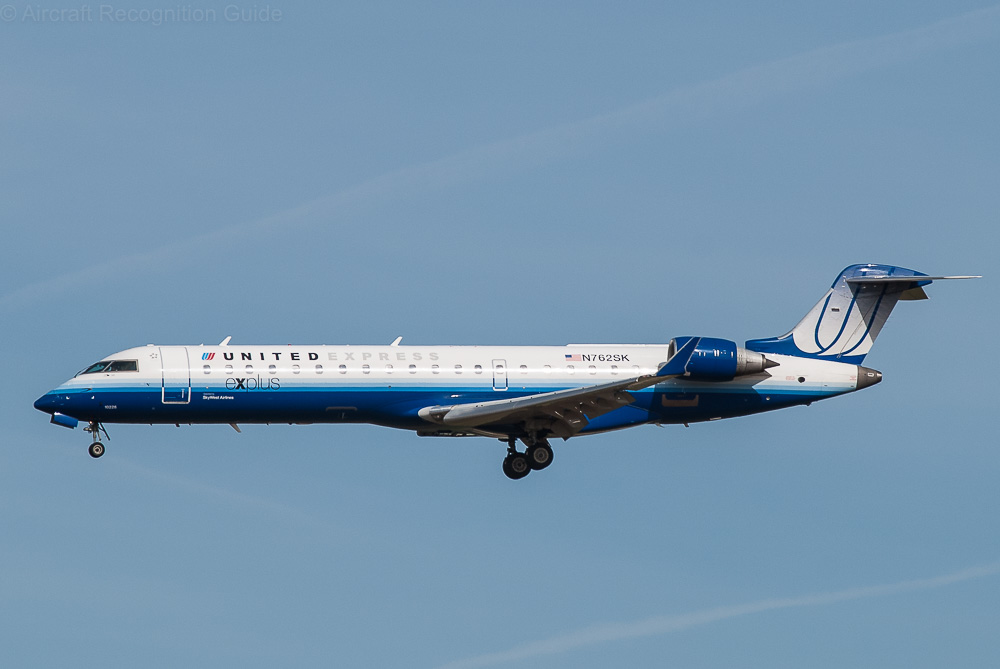 This is an example of the Canadair Regional Jet Series 700, a 701ER to be precise. Note the single overwing emergency exit. 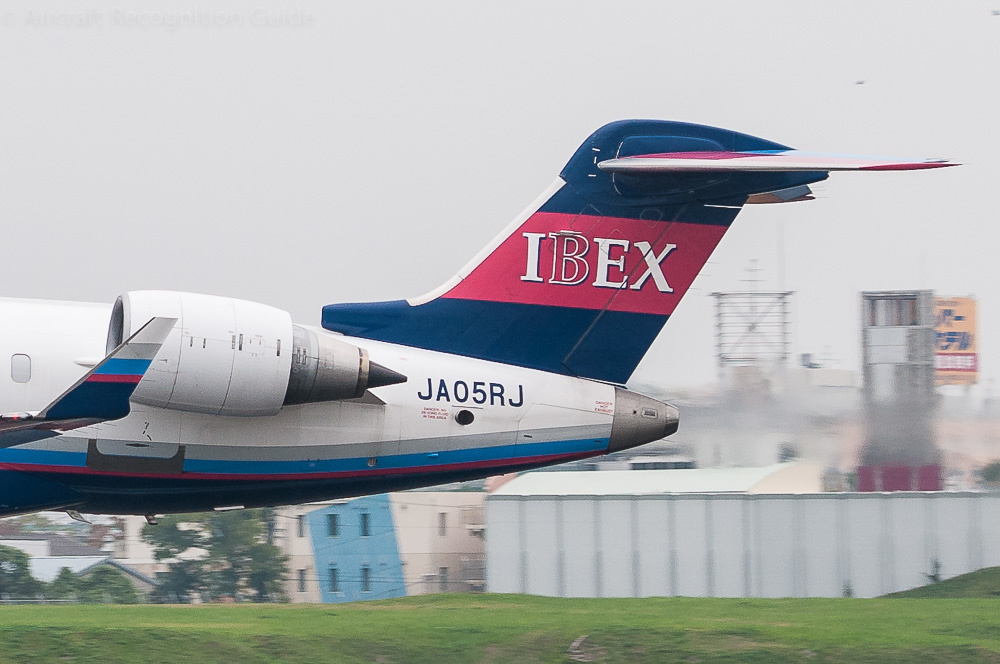 The rear of the Series 700 looks different due to the plug at the back of the nacelle, the pointed tail cone and beefed up vertical tail.

The corporate jetliner executive variant of the Series 700 is marketed as the Challenger 870. From the outside there is no difference though, just the extra fuel tanks and plush interior. 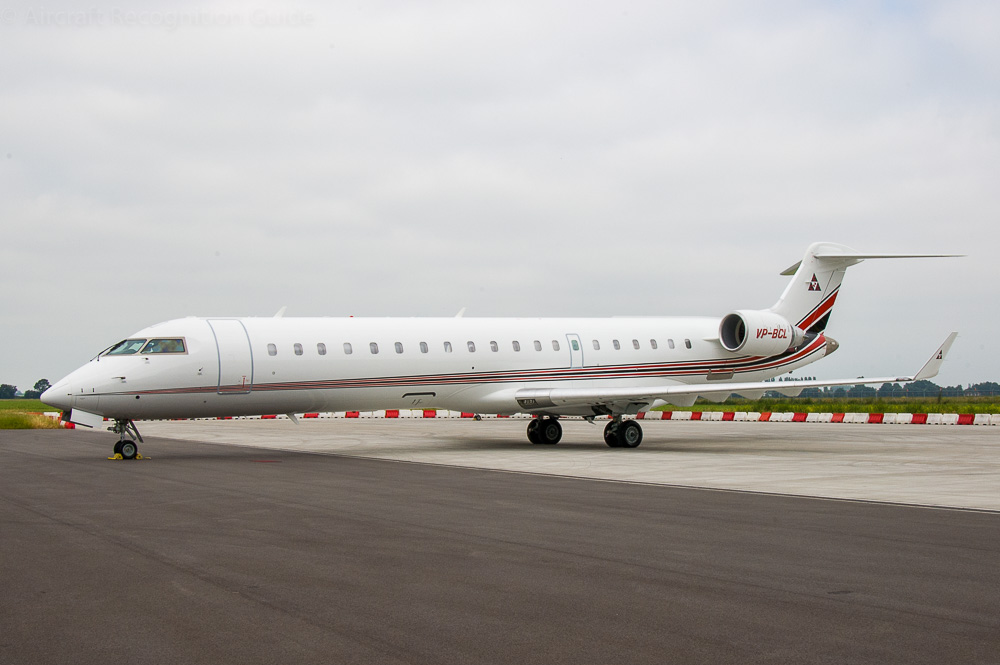 Few of the Canadair Regional Jet Series 700 were outfitted with a deluxe interior and extra fuel tanks, known as Challenger 870.

Only Air Canada Jazz once operated Regional Jet Series 705, basically a CRJ900 with only 75 seats. Still Bombardier gave it a separate official designation, CL-600-2D15. From the outside they are indistinguishable from the "real" Series 900. All have meanwhile been converted to Series 900. 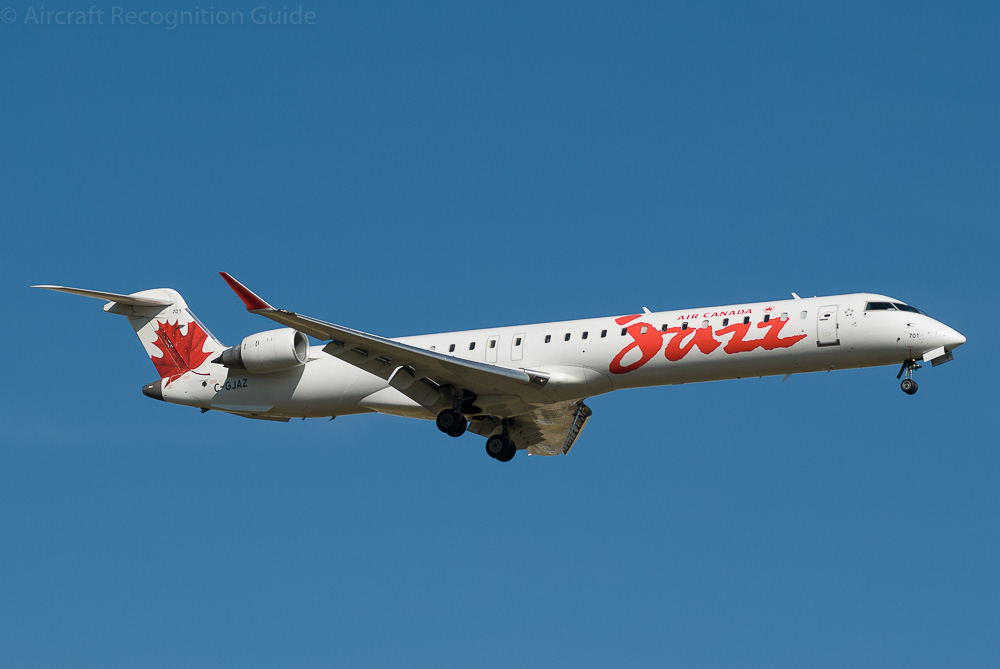 Air Canada Jazz used to operate Regional Jet Series 705, which is nothing more than a Series 900 with fewer seats.

A fuselage stretch of nearly four metres compared to the Series 700 resulted in the Series 900. To accommodate more passengers there are two overwing emergency exits of each side. Also added were two ventral fins, or strakes, under the rear fuselage. Early models have the same winglets as the Series 700, attached perpendicular to the wings. The space between the most forward emergency exit and preceding cabin window is bigger than between other windows, different from the Series 1000.

The NextGen versions have canted winglets, which have a 45 degrees angle with regard to the wings. Also the cabin windows are higher, excluding the ones in the emergency exits. 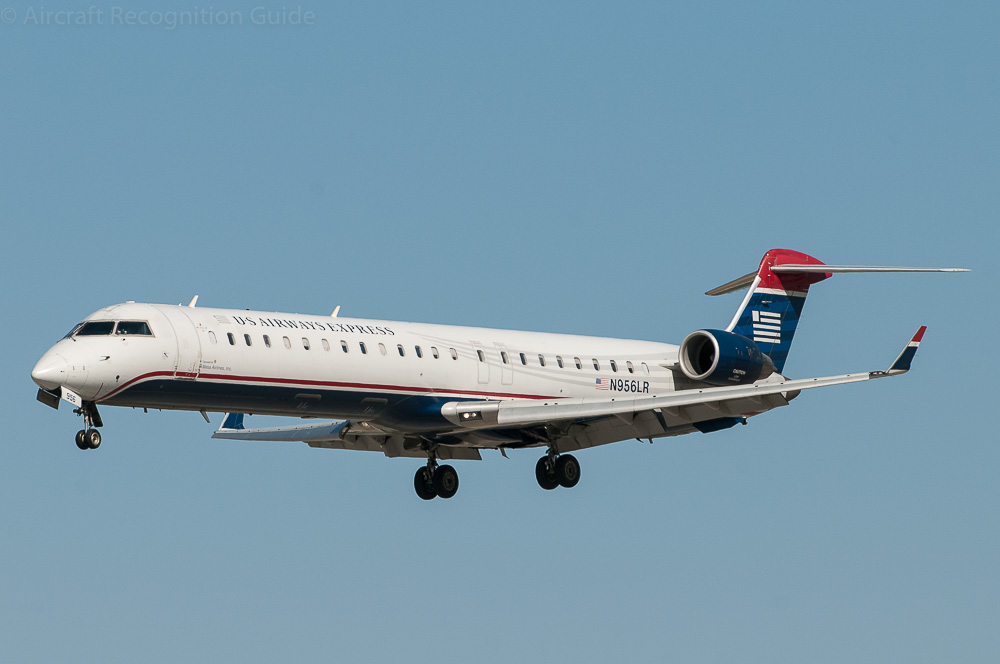 The early Regional Jet Series 900 had perpendicular winglets, like on the US Airways Express example. Note the two overwing exits. 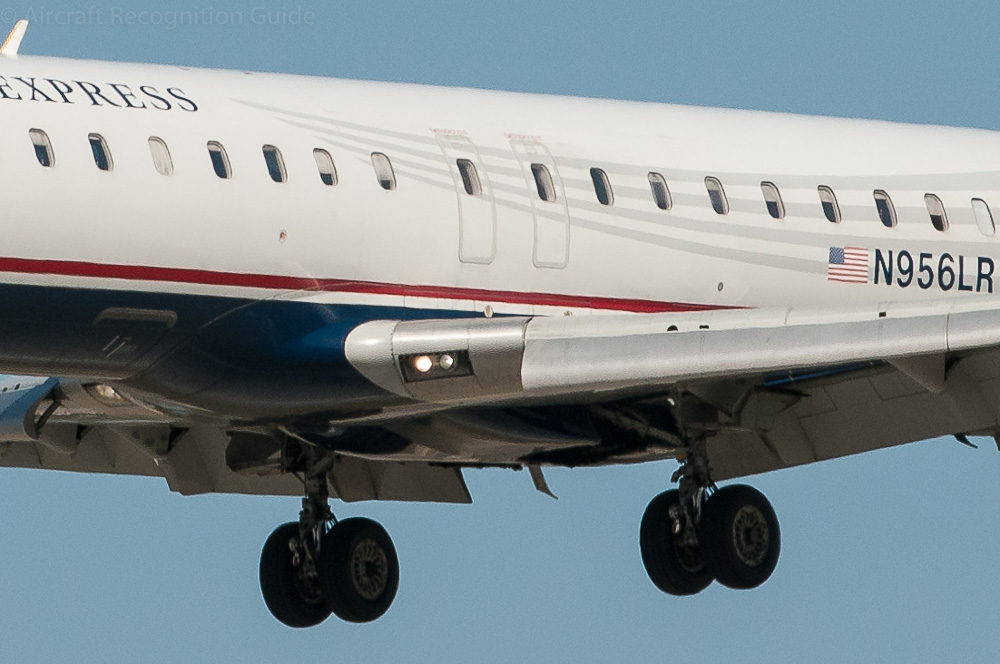 A detail of the original Regional Jet Series 900 cabin windows, all having the same height, including those in the emergency exits. 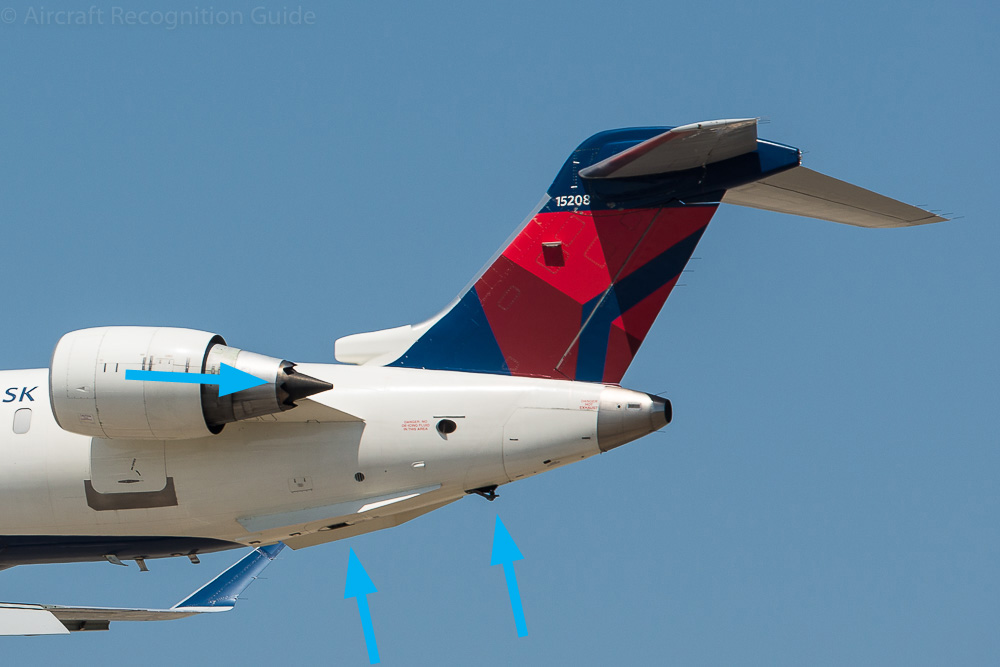 Compared to the Series 700 the Series 900 has ventral fins, serrated core exhausts and a tail skid to prevent tail strikes. 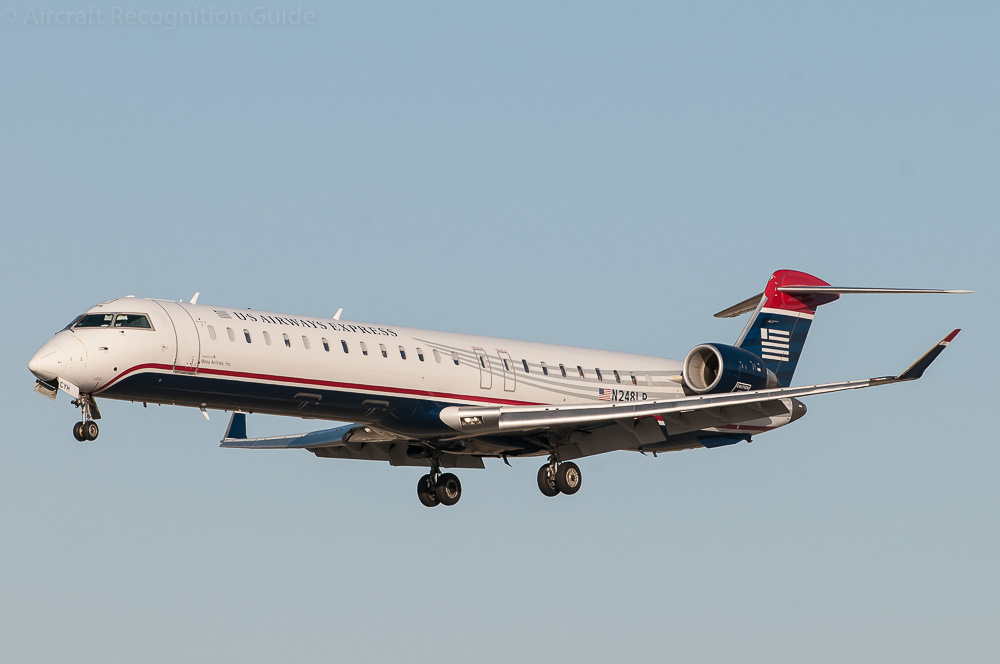 This photo looks identical to the previous one, but look at the winglets that are attached at 45 degrees on this NextGen aircraft. 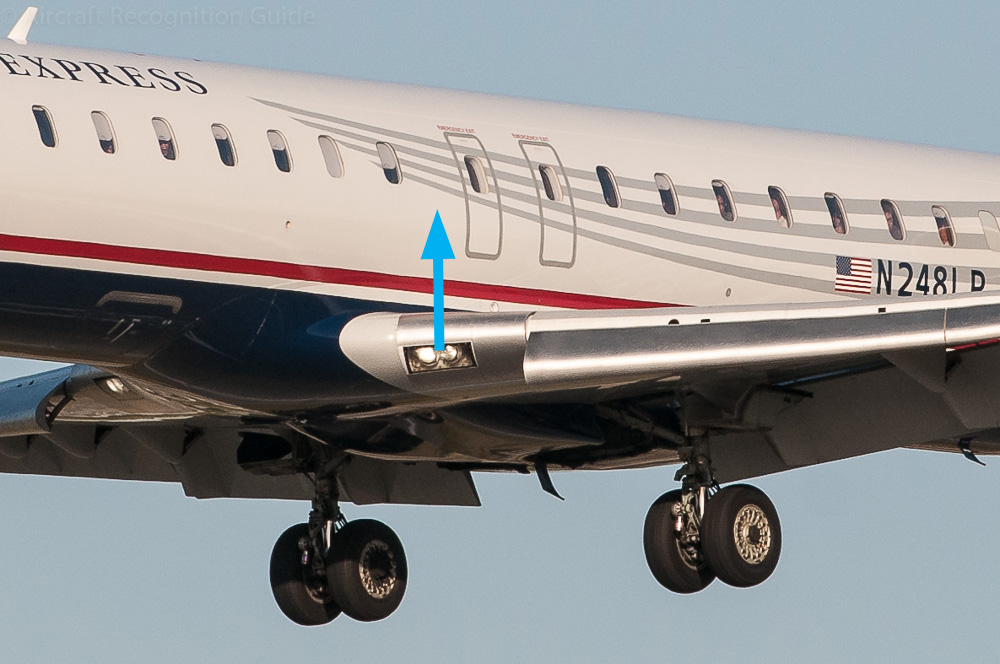 The NextGen has higher cabin windows, but not at the emergency exits. Note the larger space in front of the first exit.

Also the 900 series has an executive version, which is marketed as Challenger 890. The external appearance is not different though. 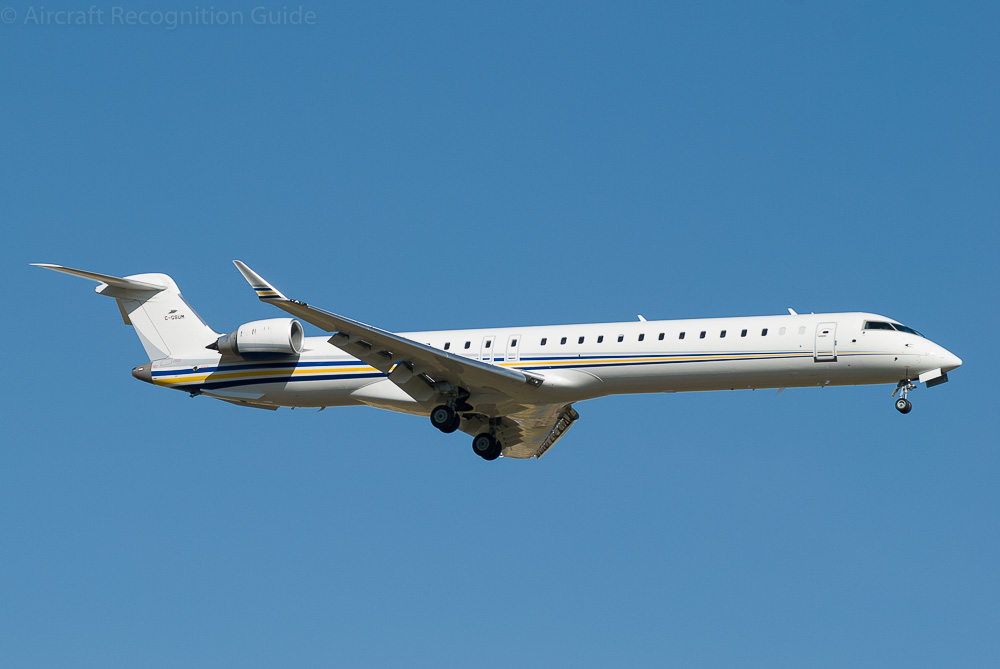 An example of a Challenger 890, the executive/corporate version of the Regional Jet Series 900.

The ultimate version of the Canadair Regional Jet family is the Series 1000. It is about three metres longer than the Series 900. Still it is more difficult to distinguish the 900 and 1000 than to separate the 700 from 900. Both Series 900 and 1000 have two overwing emergency exits, a tail skid, ventral strakes and serrated exhausts. The best way is to look at the distance between the cabin windows. On the Series 900 there is a larger distance between the window in the first emergency and the preceding window. On the Series 1000 this is between the second emergency exit and the following window, and three windows later. 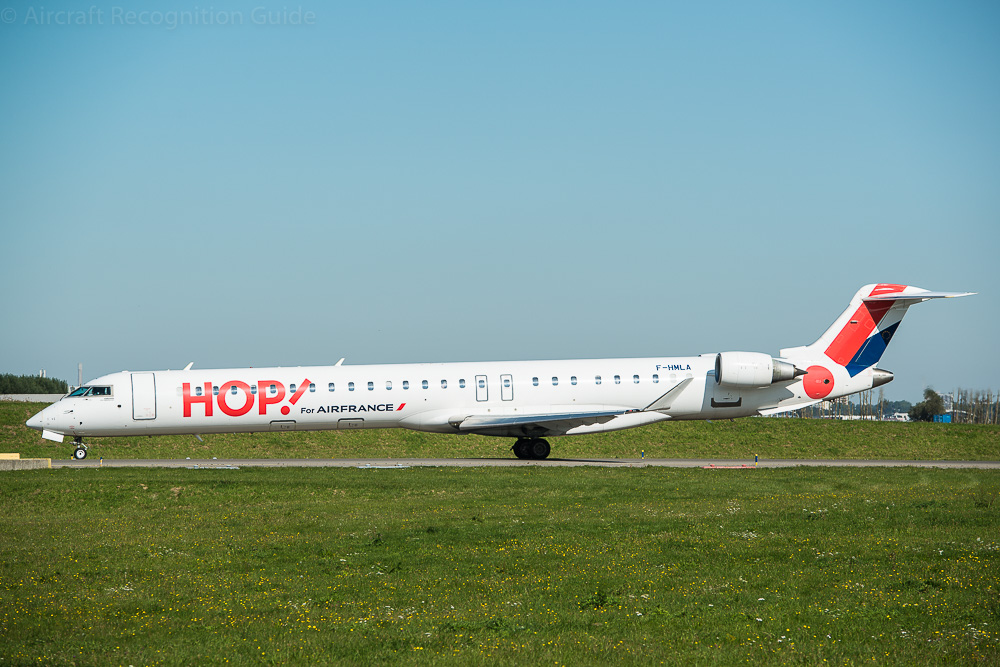 The longest version of the Canadair Regional Jet is the Series 1000, three metres longer than the Series 900, but still with two overwing emergency exits. 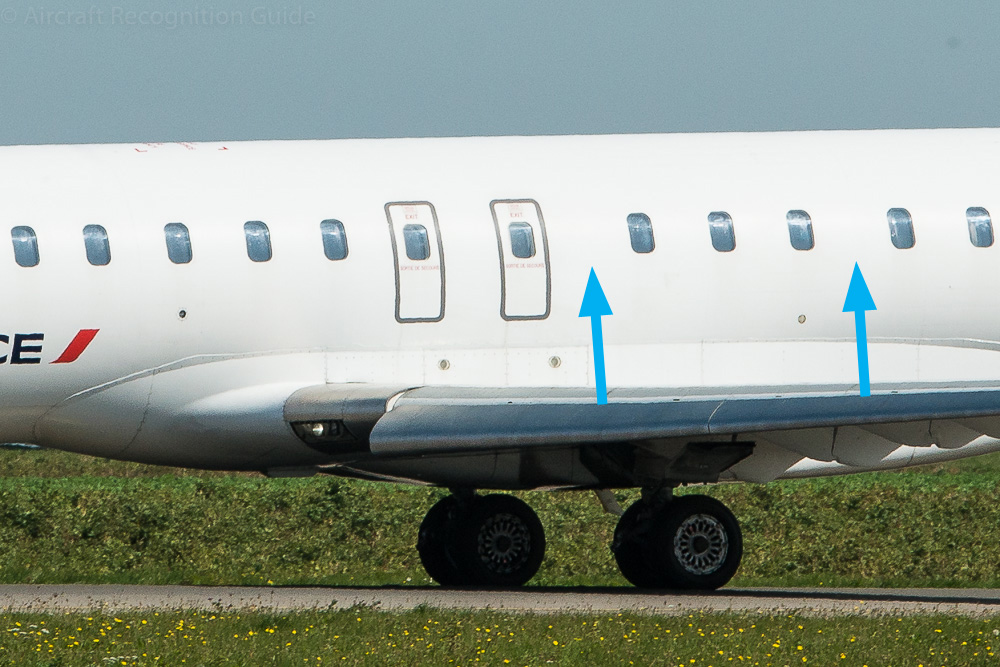