In the 1970s DeHavilland Canada was looking to expand its product line. It had built a good reputation with Short Take-off and Landing (STOL) aircraft like the Buffalo and Twin Otter. It was logical to use this expertise in a new aircraft. The company saw a niche market for a fifty seat that could could operate from the same airports as the DHC-6. At the same time the aircraft needed to be quiet enough to be allowed to fly from city centre airports. As such DeHavilland Canada avoided direct competition with the Fokker F27, HS748 and Convairliners, which need longer runway and produced much more noise.

The result was the Dash 7, a four engined turboprop aircraft. The configuration high mounted wings and a T-tail made it possible to use large diameter propellers, reducing the noise they make. The four engines blow over a significant part of the wing, increasing the performance at slow speeds and reducing the runeay length required. The long main landing gear legs retract forward in the inner engine nacelles. 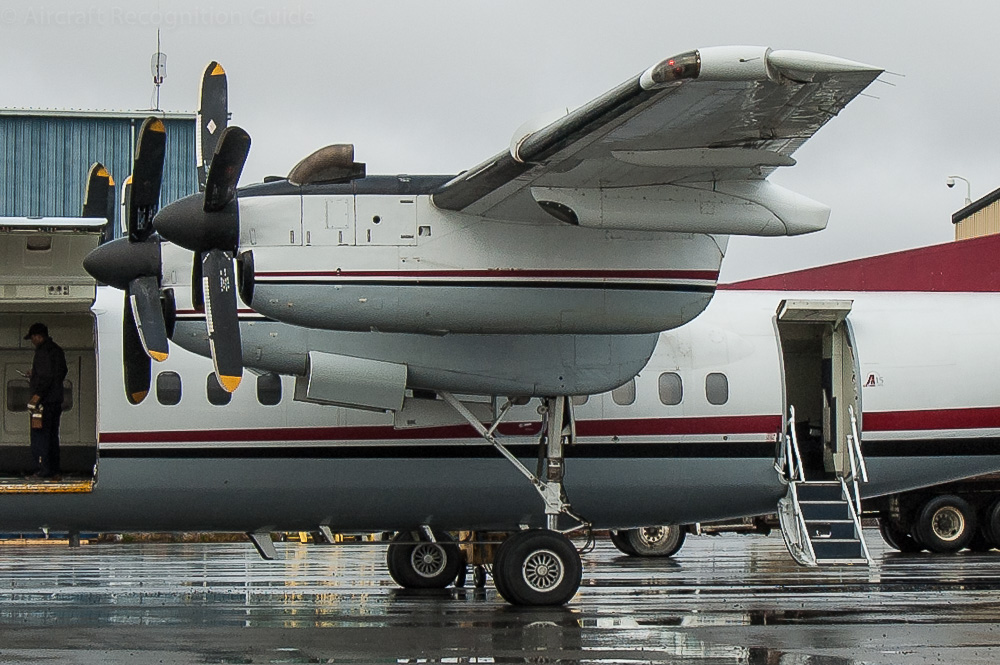 The four engines are placed in large nacelles under the wings. Each engine has two exhaust on top of the nacelle. 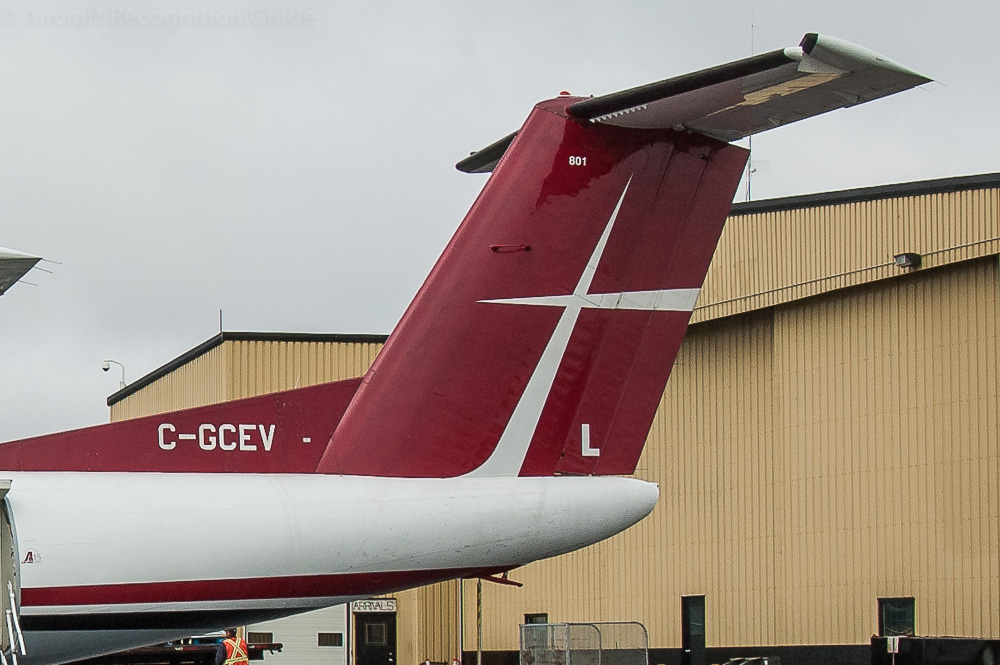 The large vertical stabiliser with a big dorsal fin provide the directional stability during low speeds. It is essentially the same as on the Dash 8.

The different versions of the Dash Seven family are not easily identified. Only the cargo door in the left front fuselage provides some help, as does special mission equipment.

These are all pure passenger versions without a cargo door. The DHC-7-1 was the prototype. The first production version was the DHC-7-100. The Series 102 has a high maximum take-off weight, and the -110 is the same version certified in the United Kingdom. Finally, the DHC-7-150 has an even higher gross weight and increased fuel capacity.

If you have difficulty seeing the door itself you can also recognise these version by the cabin windows. On the left side there first a single window in the emergency exit. Next is a pair of cabin windows before the rest followes.

The Canadian air force has used both the Series 102 and 103. They were both designated CC-132. 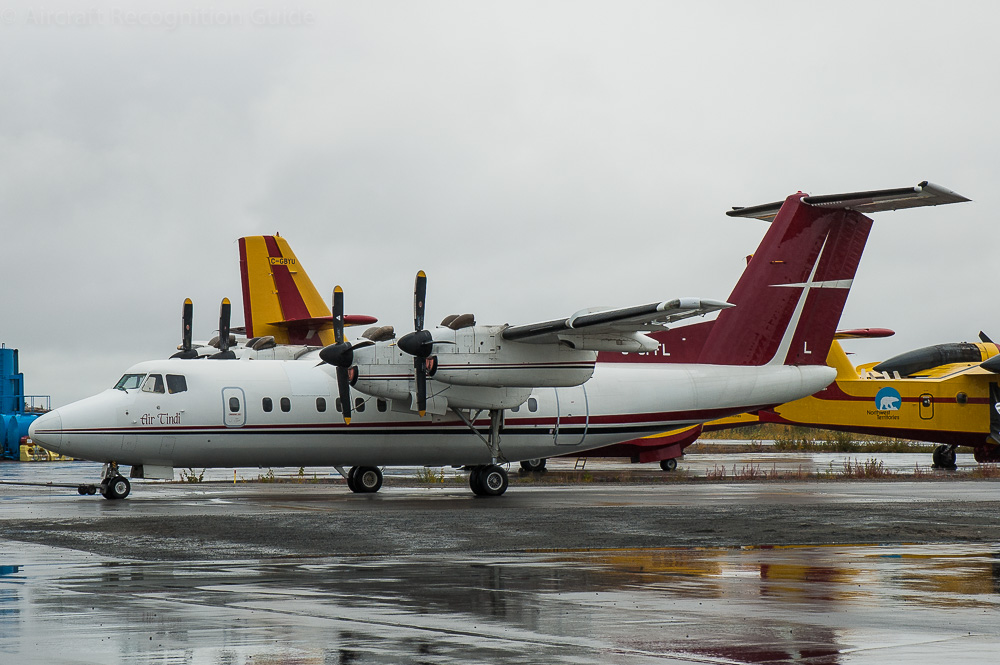 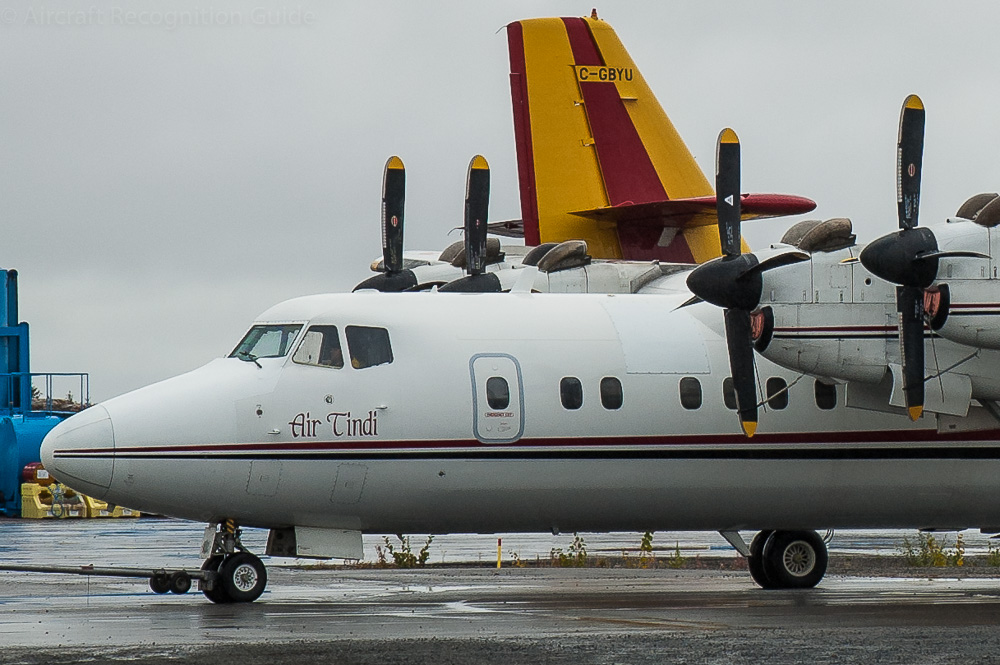 Detail of the from fuselage of a DHC-7-102. It has one cabin window in the emergency exit, followed by a set of two.

These are all versions with a large cargo door in the left front fuselage. Apart from the door itself it can be recognised by the cabin window arrangement. On the left side there are two single, separated windows before the rest followes in a row. The first production version was the DHC-7-101. The Series 103 has a high maximum take-off weight, and the -111 is the same version certified in the United Kingdom. 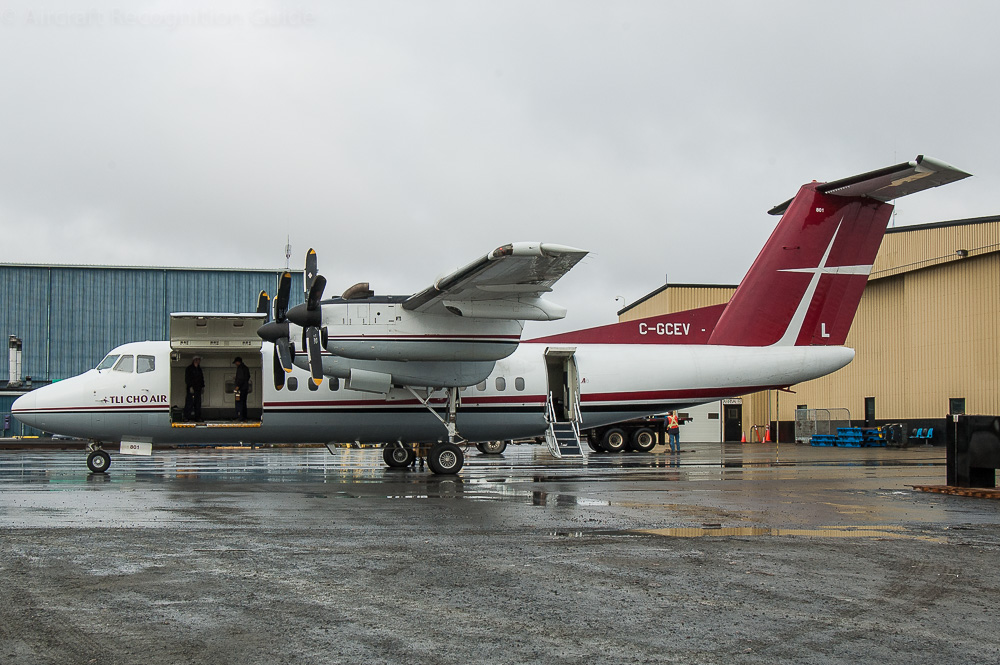 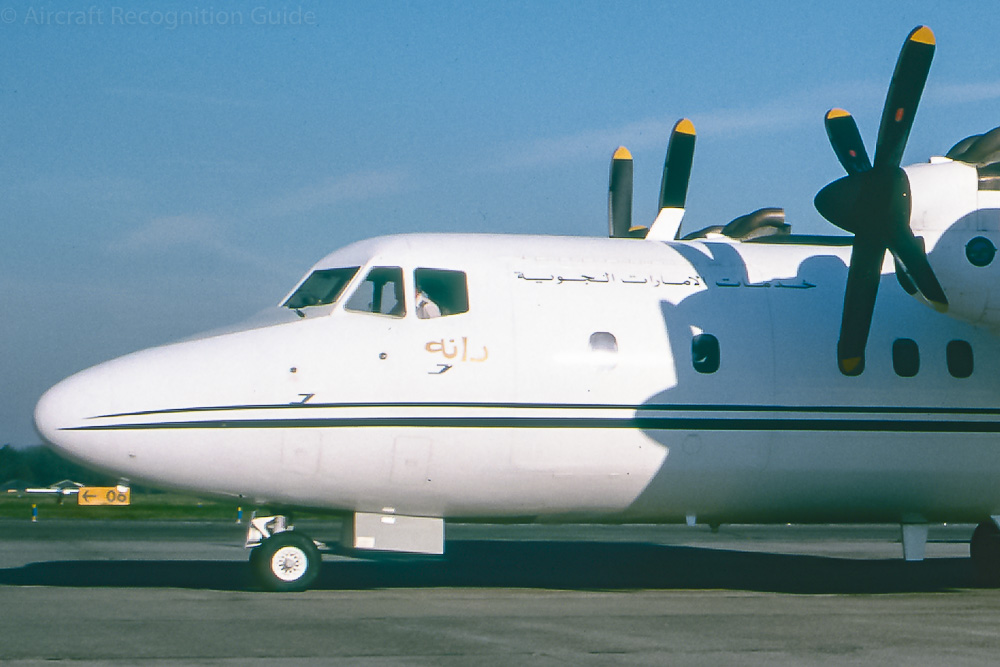 A close-up of the forward fuselage of the DHC-7-103, with its two single, separated cabin windows.

DeHavilland Canada modified one DHC-7-150 for the Candian government, for patrolling the arctic areas. It has an observation dome popping out of the top forward fuselage. 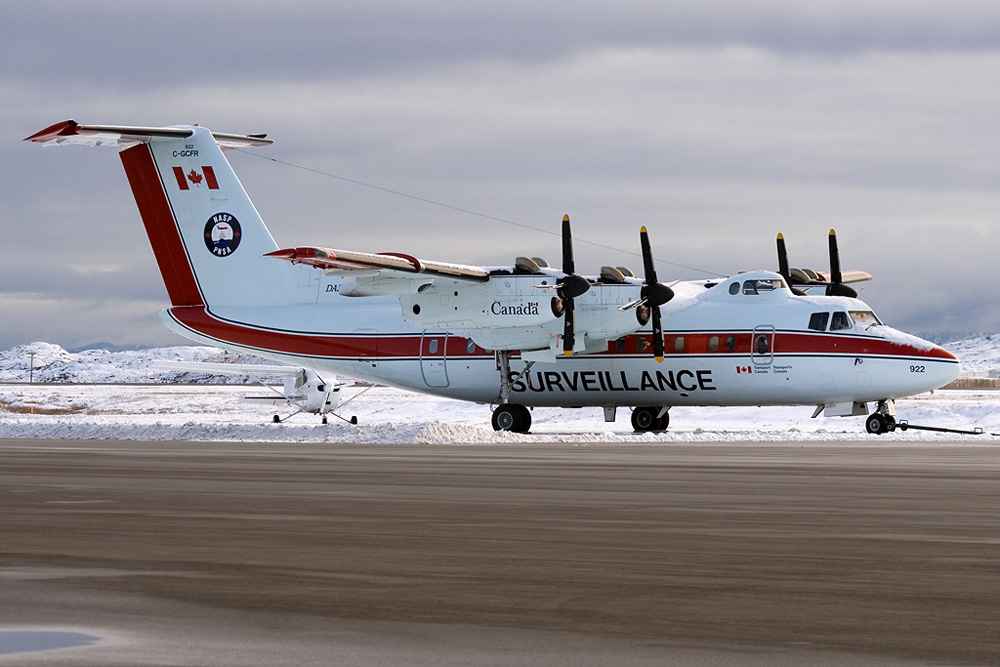 The single DHC-7-150IR, with an observation area on top of the fuselage. (photo Darian Froese/WikiMedia)

Another military user was the US Army, which used the aircraft as an Airborne Reconnaissance Low (ARL) platform. Ten DHC-7-102s and -103s were converted. They can be recognised by multiple bulges with sensors. The different versions are: 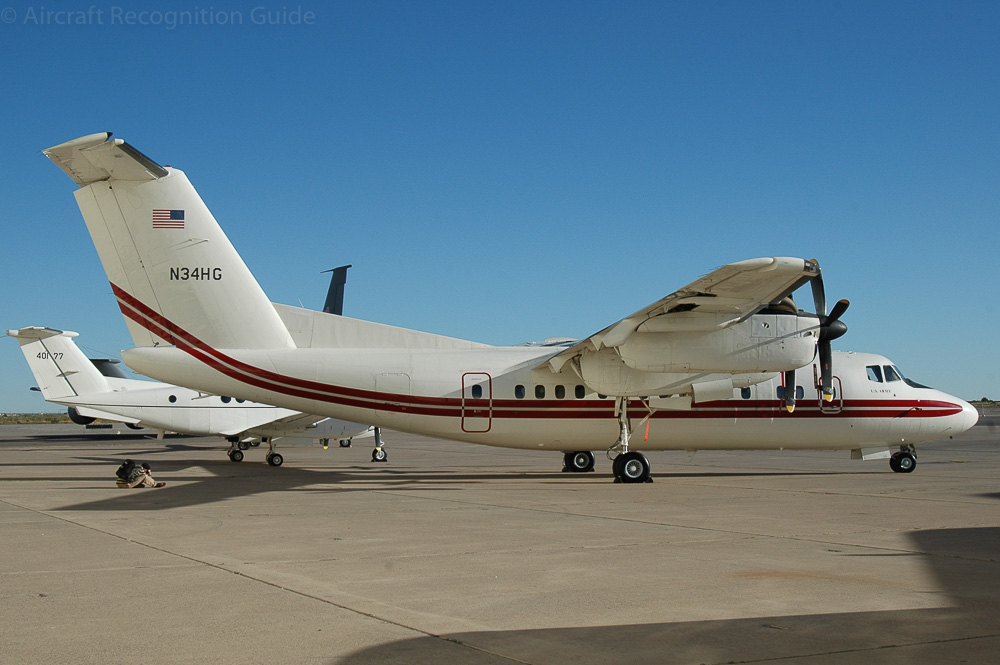 The TO-5C is the training version of the EO-5C. It looks like a regular DHC-7. 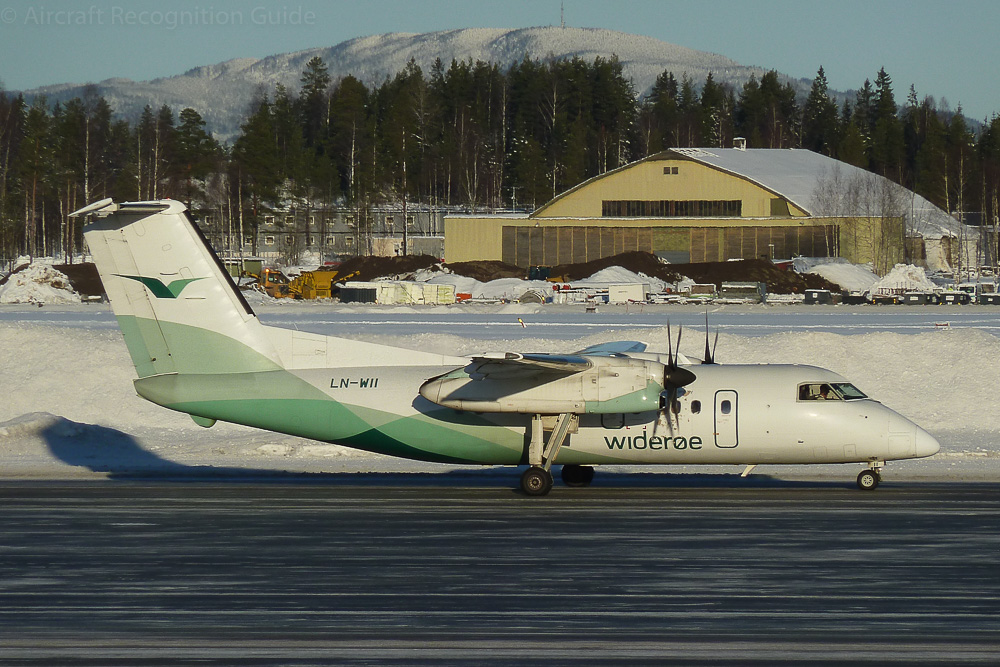 Although the Dash 8 has two engines and the Dash 7 four, they still have a lot in common, in particular behind the wings. For the rest the Dash 8 has a different nose with cockpit windows and a main landing gear that retracts rearward in the nacelles.