Building on the experience with the DHC-3 Otter, deHavilland of Canada made a twin turbine powered version of that aircraft, the Twin Otter. The heritage of the Otter is mainly visible in the fuselage, the cabin windows and cockpit windows. These are mated with long span wings braced by struts. The two Pratt & Whitney Canada PT6A engines are in the wing leading edge. Typical are the large air intakes at the bottom, nearly the size of the porp spinners. At the back of the DHC-6 is a big cruciform tail. The aircraft has a fixed tricyle landing gear, but can also be fitted with floats.

After production had stopped in 1988, the manufacturing tooling was sold to Viking Air. In 2006 this company also acquired the type certificate and announced a restart of the production. 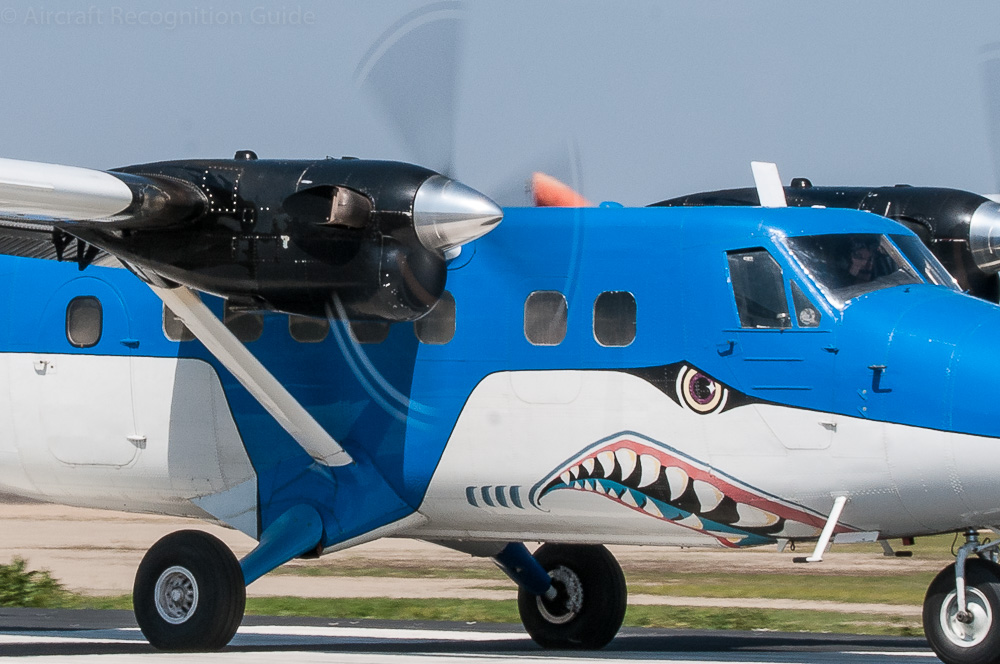 Two key characteristics of the DHC-6 are the large air intakes, nearly as big as the propeller spinners, and the cabin and cockpit windows similar to those of the DHC-3 Otter. 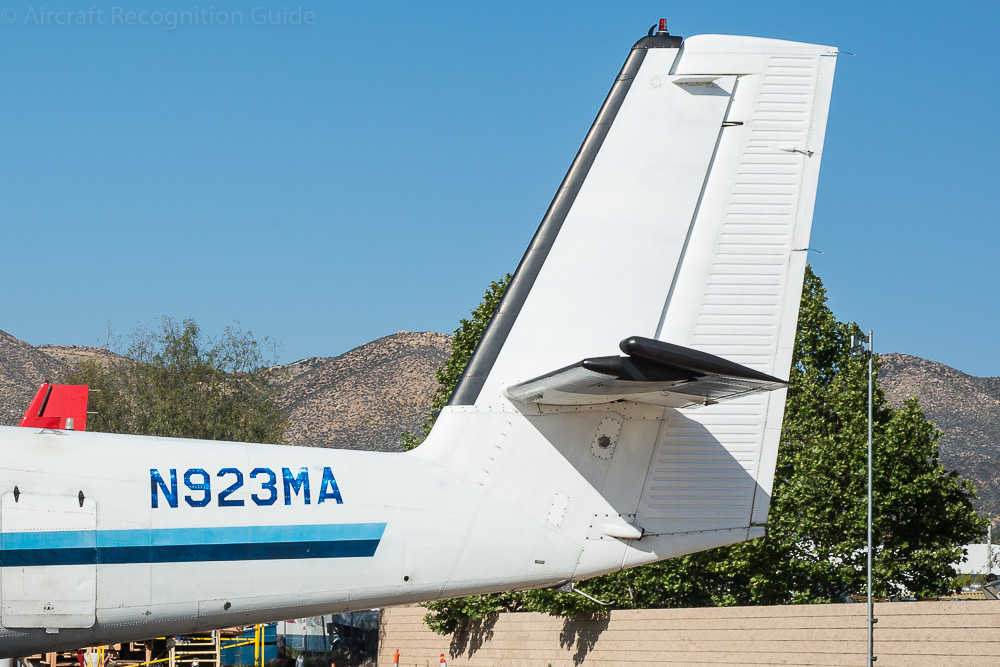 The cruciform tail of the Twin Otter.

The different versions of the DHC-6 Twin Otter are partly distinguishable by the shape of the nose and the cabin windows.

The first production version was the DHC-6-100. It has a short nose, much like that on the Otter, as standard. The aircraft can be fitted with a wheel landing gear and floats. The Series 110 has some changes required to certify the aircraft in the United Kingdom.

The short nose of the Series 100/110 is not a distinguishing feature though, as later versions can also be fitted with a short nose. This was for example required for some type of floats, to preserve a good air flow. 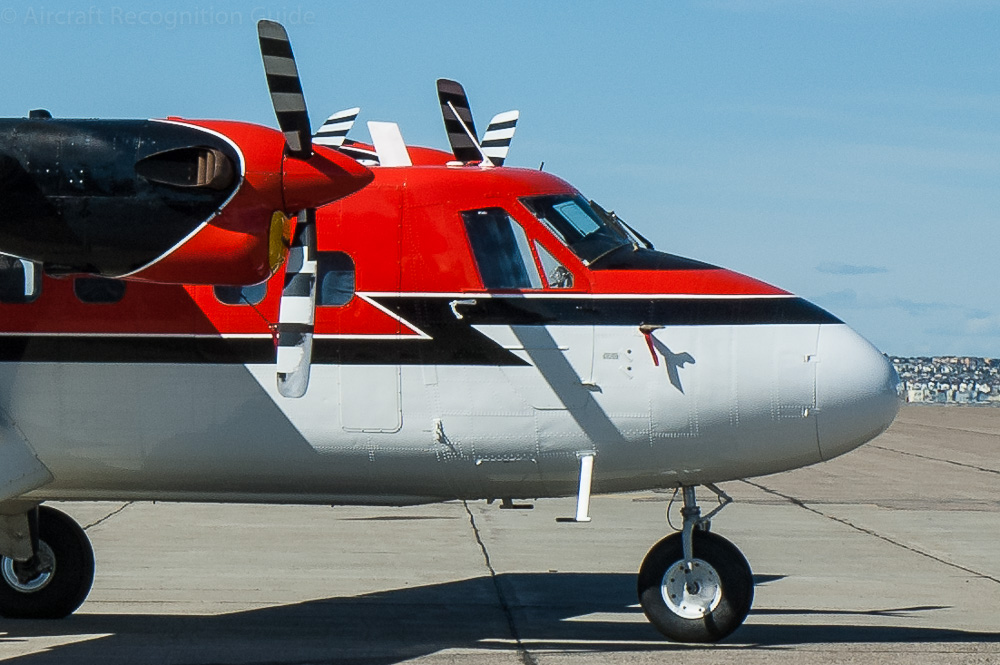 The short nose version of the Twin Otter. 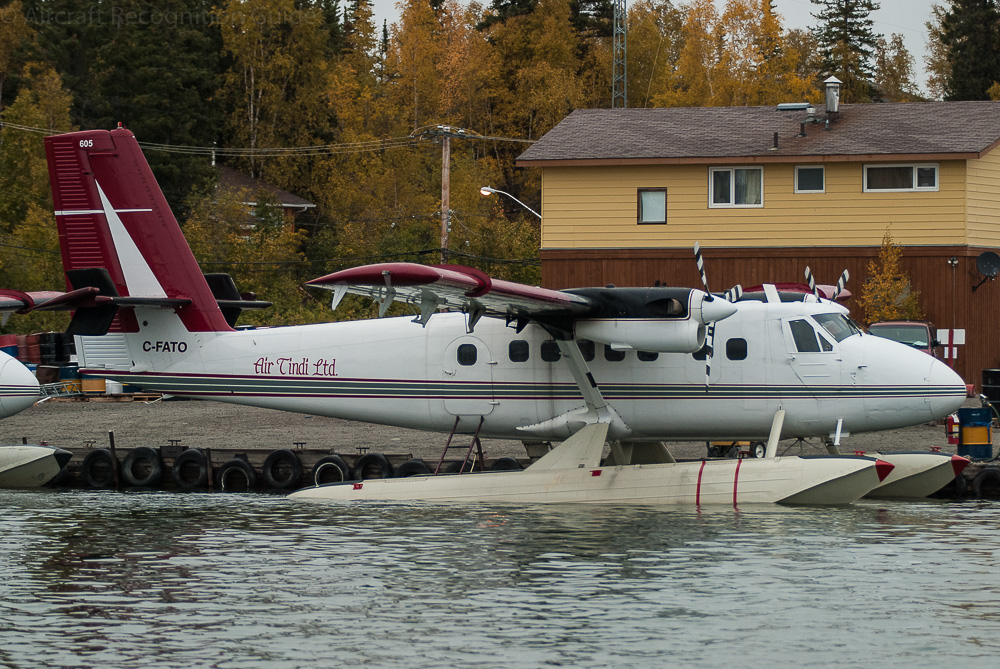 A DHC-6-300 on floats with a short nose. This type of floats apparently made it necessary to place a short nose on the aircraft.

To create more baggage space, the DHC-6-200 was developed. Internally, more space in the rear cabin is available for baggage. Also the nose was longer to hold more baggage. 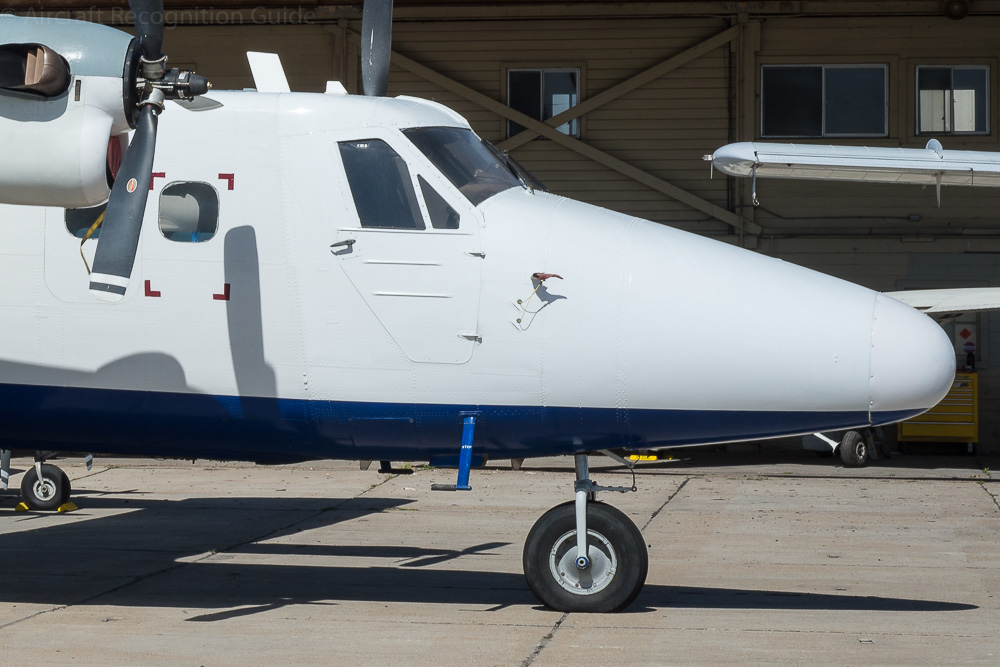 A Twin Otter Series 200 with more powerful engines is a DHC-6-300. For the rest they are the same. More power available meant that they are more suitable as float planes. With some float types, the Series 300 had to be equipped with a short nose. Hence the size of the nose is no clear recognition point!

The DHC-6-300S was a version with wing spoilers and an anti-skid braking system. The Series 310 and 320 include modifications required by the British and Australian authorities, respectively.

The Canadian air force uses a version of the DHC-6-300, designation as CC-138. They mostly operate in the far north of Canada.

UV-18A is the designation of DHC-6-300s in service with the United States Army. They were used by the Army National Guard in Alaska, but also by the US Army parachuting team, the Golden Knights. 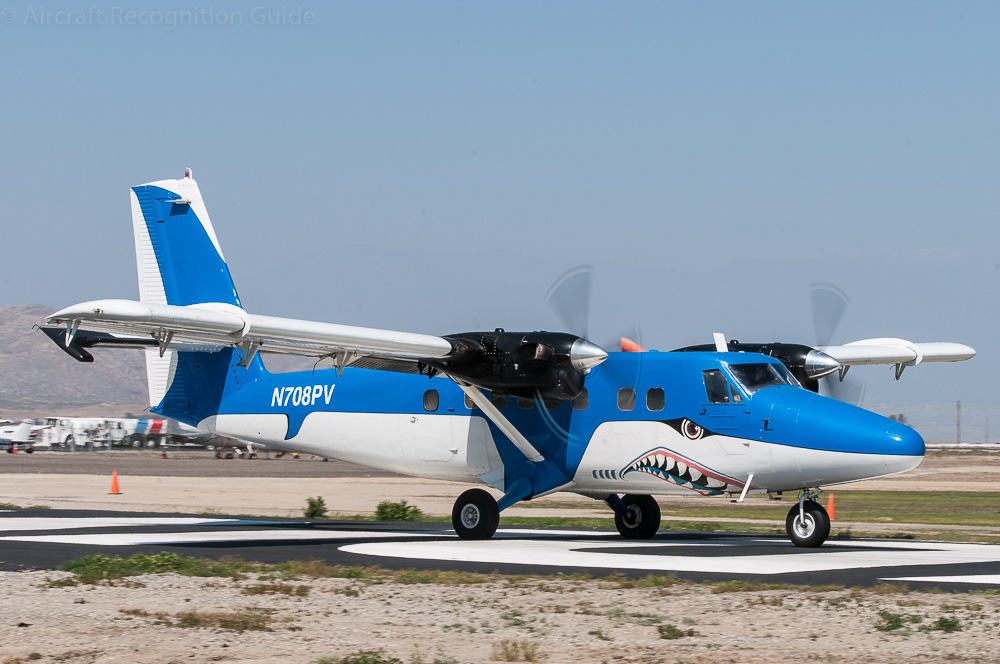 Full view of a taxiing DHC-6-300 Twin Otter, which is popular with skydiving clubs. 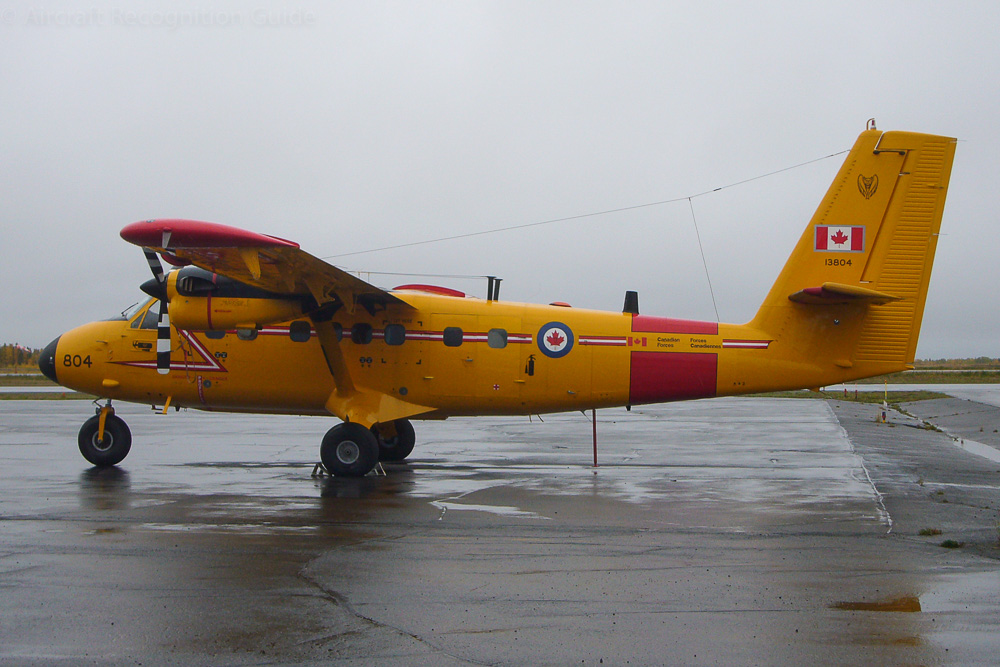 The Canadian military version of the Twin Otter is the CC-138. Note the big "tundra tires", which make landing on soft soil possible. 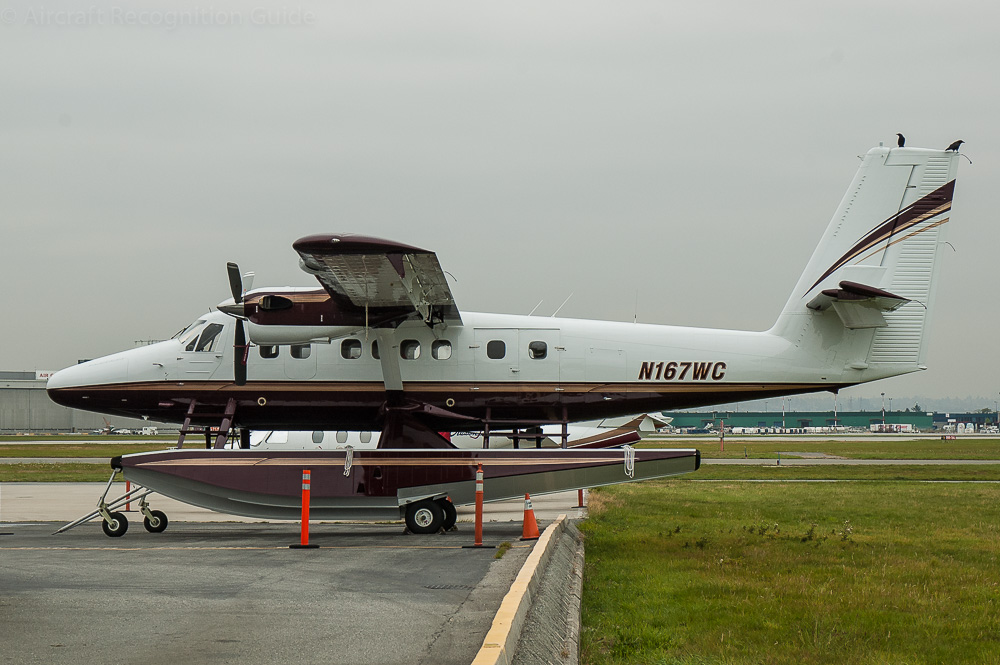 With a different model floats you can keep the long nose on the DHC-6-300.

Grand Canyon Airlines had some dozen Twin Otters modified with much larger cabin windows, to allow the passengers a better view when flying over the Grand Canyon. DHC-6s modified as such are known as VistaLiners. 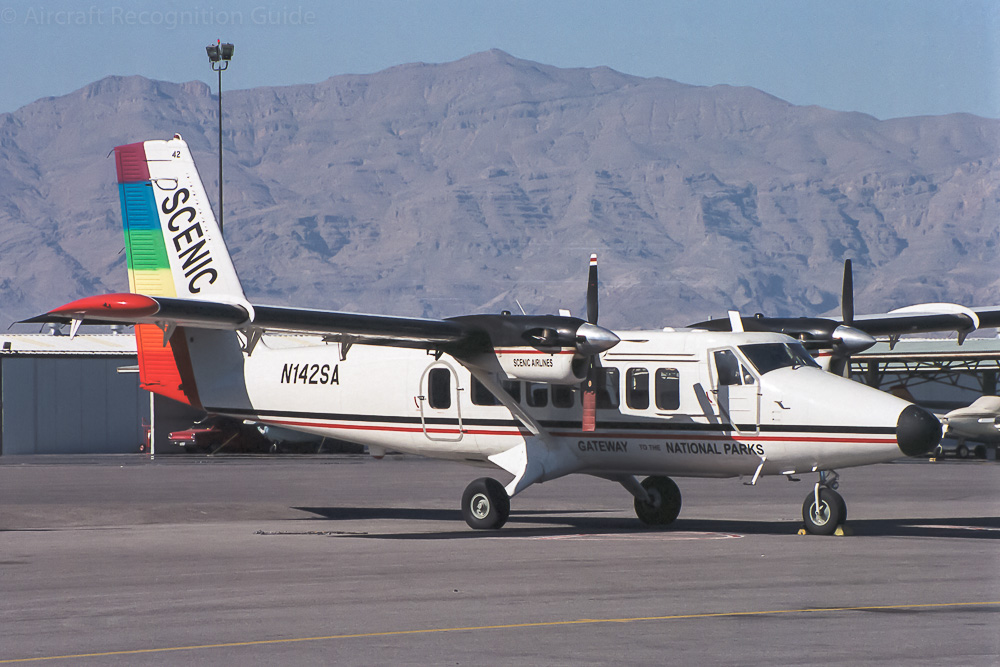 A Twin Otter modified with large cabin windows, known as the VistaLiner.

Viking Air restarted the production of the Twin Otter with an updated version, the Series 400. Most changes are internal though, such as the uprated PT6A engines, a modern cockpit with displays and different electrical systems. 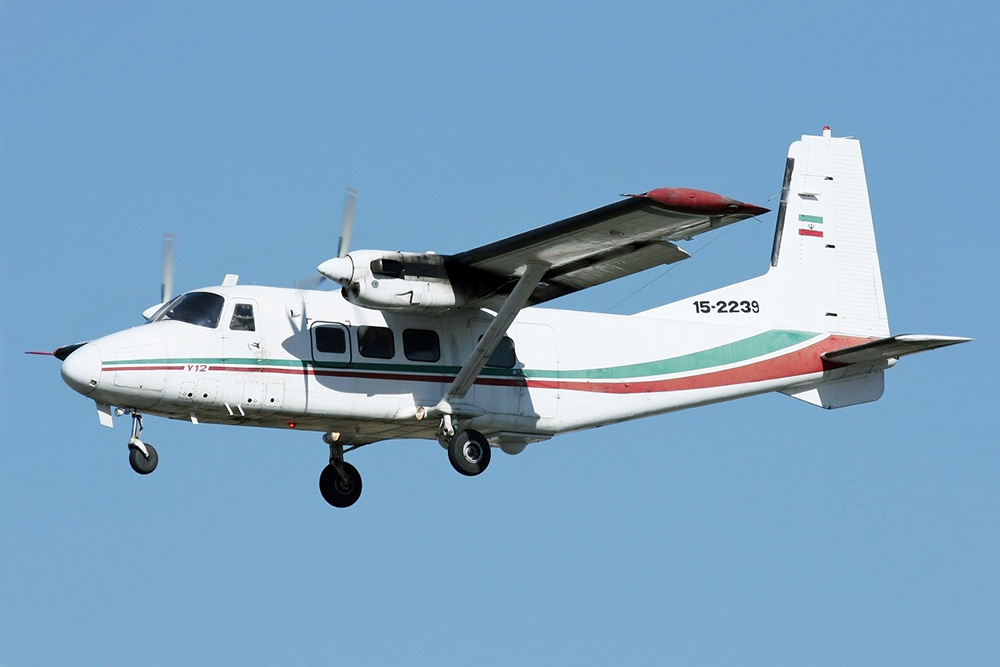 The biggest Twin Otter look-a-like is the Harbin Y-12, which has the same basic configuration. Different on the Harbin are amongst others the dorsal fin and ventral fin, and larger cabin windows (but not as large as on the VistaLiner). (photo WikiMedia/Shahram Sharifi - Iranian Spotters) 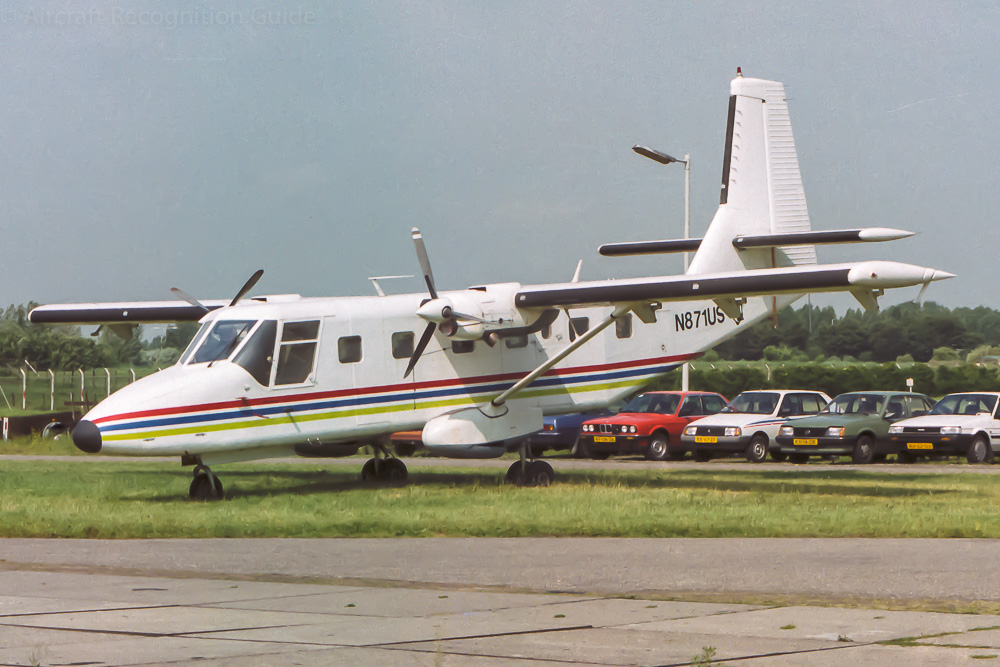 Also the GAF Nomad shares many characteristics with the DHC-6, including a cruciform tail, albeit with a different shape. The landing gear is the main distinguishing feature, as the Nomad has a retractable landing gear with two wheels on the main gear legs. 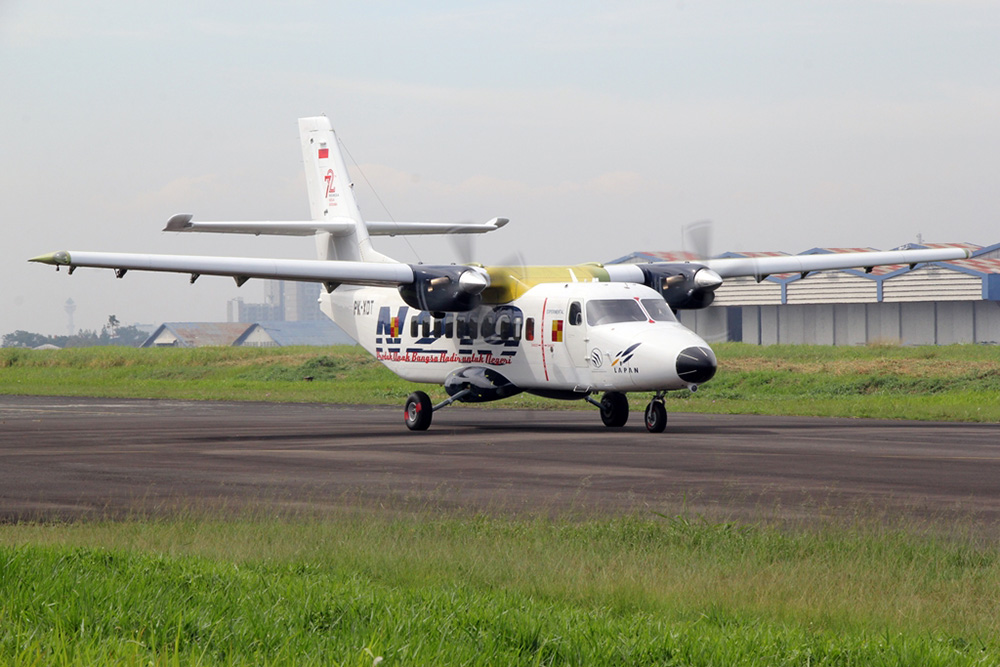 The N219 has a cruciform tail like the DHC-6 but with a bigger dorsal fin, and a fixed landing gear with single wheels. It has four streamlined cockpit windows though, and no wing struts. (photo WikiMedia/LAPAN) 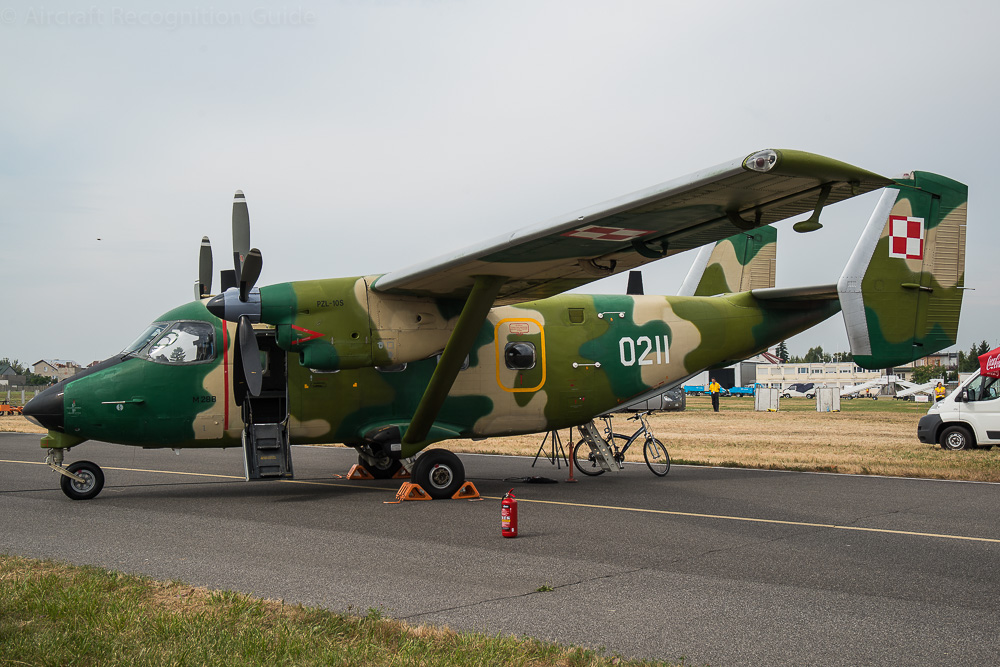 While the An-28 and PZL M28 also has a fixed landing gear, high mounted wings and turboprop engines in the wings they has one distinctive difference: the H-tail.