When several European countries jointly developed a fourth generation fighter that resulted in the Eurofighter Typhoon, France took its own path. However, the Rafale has quite a similar configuration: it has two engines, a delta wings with canards and a big single vertical stabiliser. The canards are placed behind the cockpit and have no dihedral. Below are the two oval shaped air intakes, diagonally attached to the side of the fuselage. The fuselage is cruved inward here. This is one of the main recognition points of the Dassault Rafale. 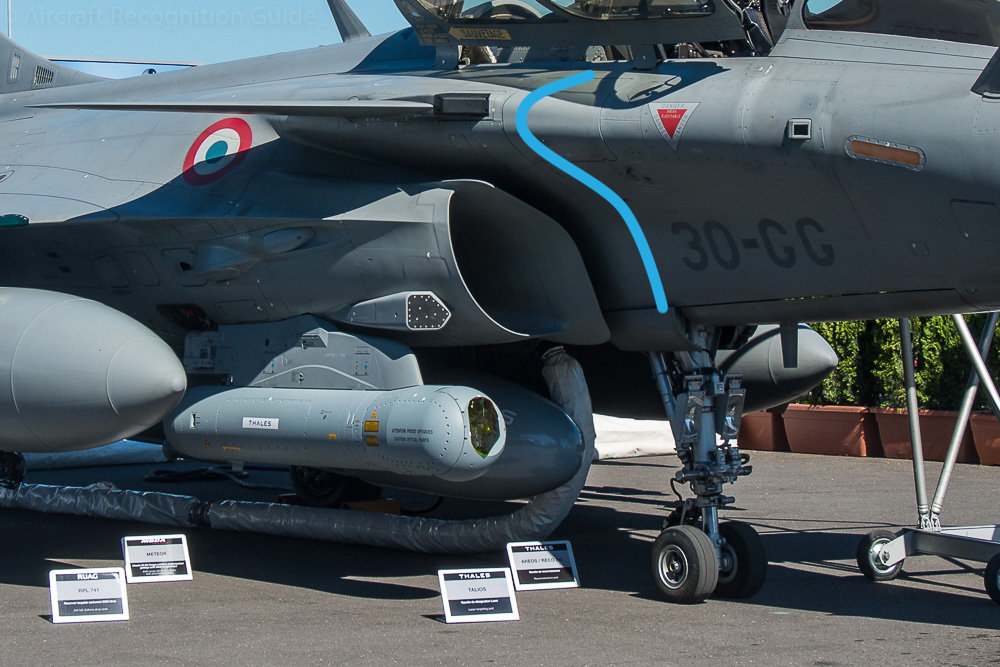 The fuselage of the Rafale had to be curved below the canopy to make room for the oval air intakes. 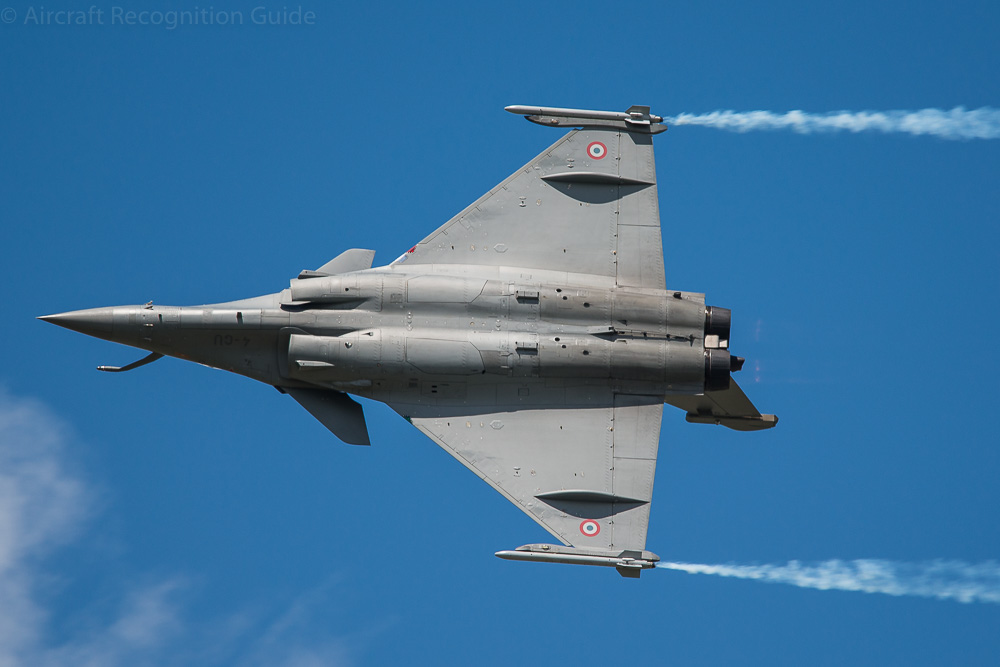 Bottom view of the Rafale, showing the delta-canard configuration. 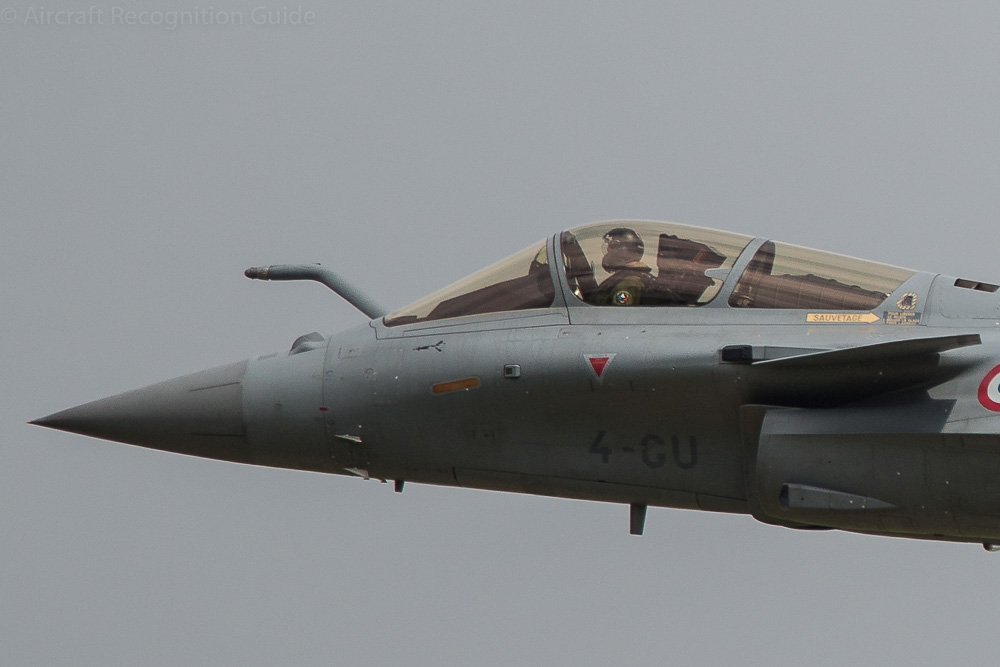 This photo shows the fixed refuelling probe and curved fuselage near the air intakes, enhanced by the shadow.

The different main versions of the Rafale can be recognised by:

Like many other fighters of its time the Rafale had a develoment version to test new technologies. This is dubbed Rafale A. In general it looks much like the eventual Rafale C, with some exceptions. On the outside most obvious is the vertical stabiliser, which has a dorsal fin with intake at the root. Also it has no rectangular pod at the top and the canopy of the Rafale A is not gold coated. Less visible are the different exhaust and overall size: the Rafale A is somewhat larger than the Rafale C. 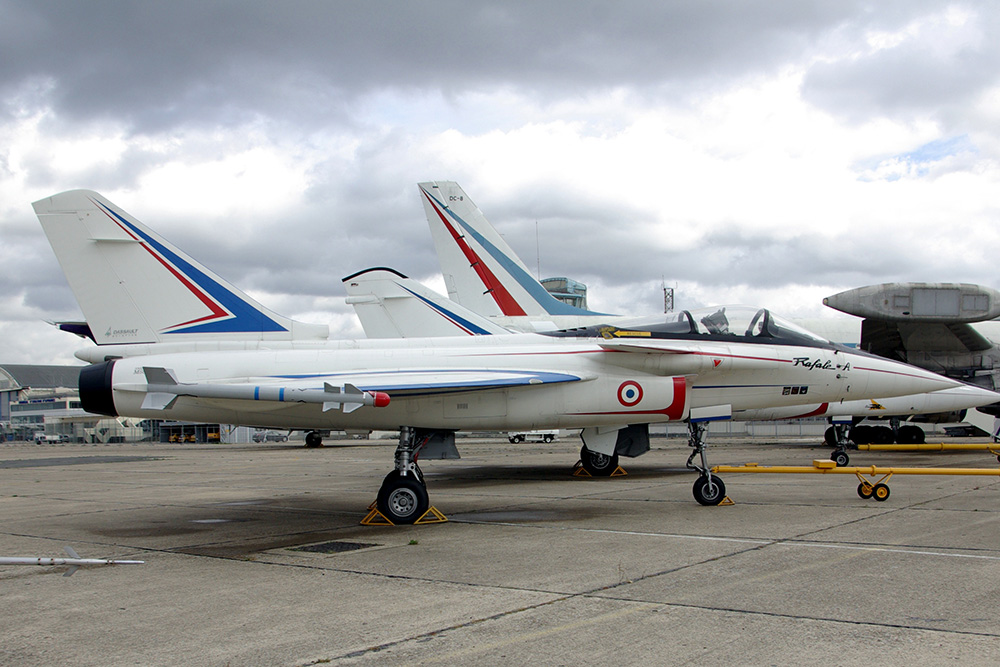 The Rafale A, now in the Musée de l'Air, clearly has no gold-coated canopy and a clean top of vertical stabiliser, but does have an air intake at the root of the dorsal fin. (photo Buch.seb/WikiMedia)

The Rafale B (B for bi-place) is the two seat trainer version of the Rafale, but also acting as strike and reconnaissance aircraft when the pilot is supported by a weapons/camera operator instead of an instructor pilot. It has of course a longer canopy than the other models.

The Egyptian air force two seaters are called Rafale DM, while those of the Indian air force are known as Rafale DH. 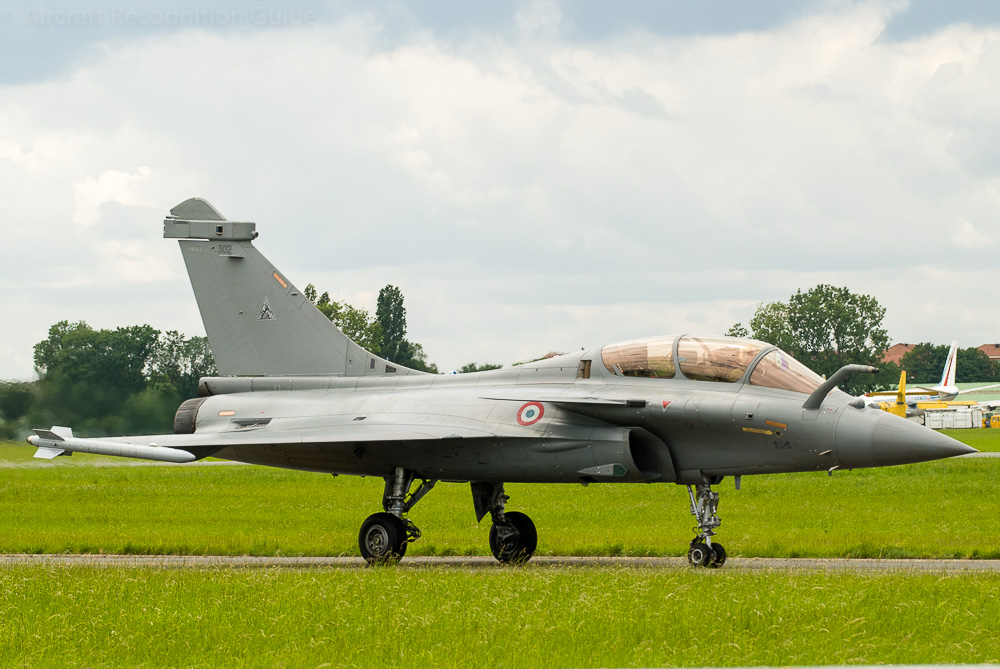 The Rafale B has a longer nose than the other versions, with a two seat cockpit and longer canopy.

The main land-based single pilot version of the rafale is designated Rafale C, with C standing for 'chasse'. It is basically the same as the rafale A, but with a gold-coated canopy, a curved dorsal fin without intake at the root and a large rectangular pod at the top of the vertical stabiliser.

This version was also exported to Egypt and India, designated Rafale EM and Rafale EH respectively. 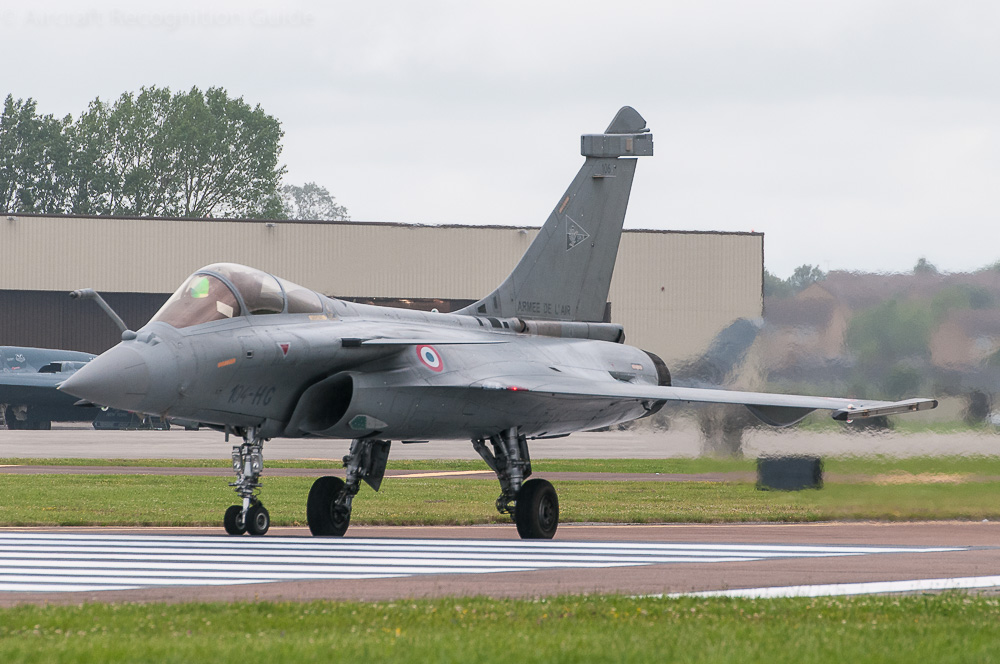 The front view of a Rafale C, with its single seat cockpit. 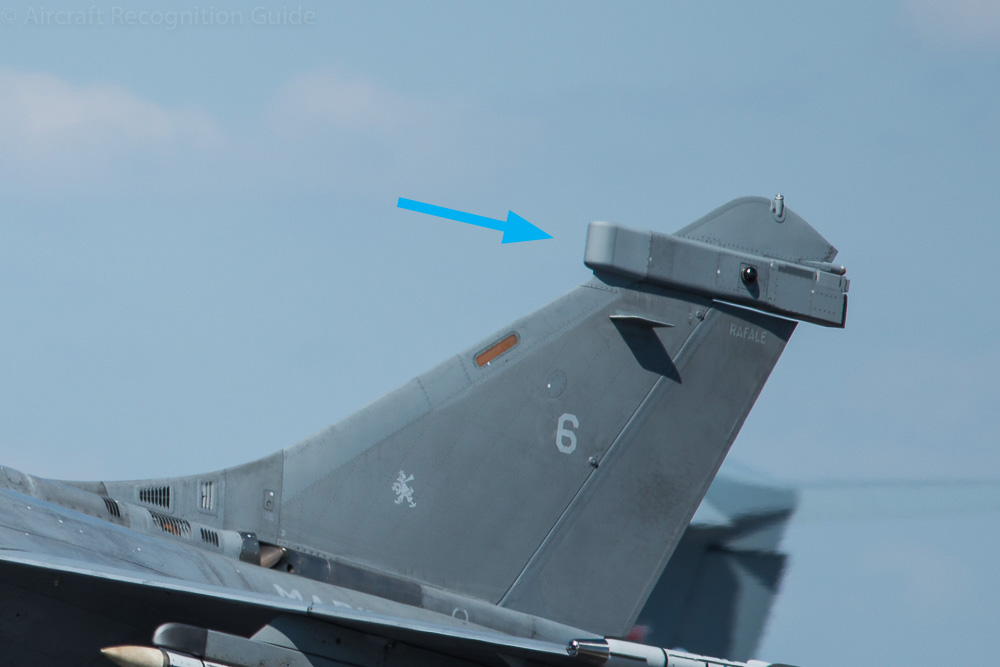 The rectangular pod near the top of the vertical stabiliser is typical for the Rafale C.

As replacement for the F-8 Crusader the French ordered a naval version of the Rafale. Named Rafale M (for 'marine') this version has a stronger structure and landing gear to cope with the controlled crashes on aircraft carriers. The nose gear is longer than that of the Rafale C, has a diagonal beam at the back (as part of the strengthening) and a provision to attach the catapult. 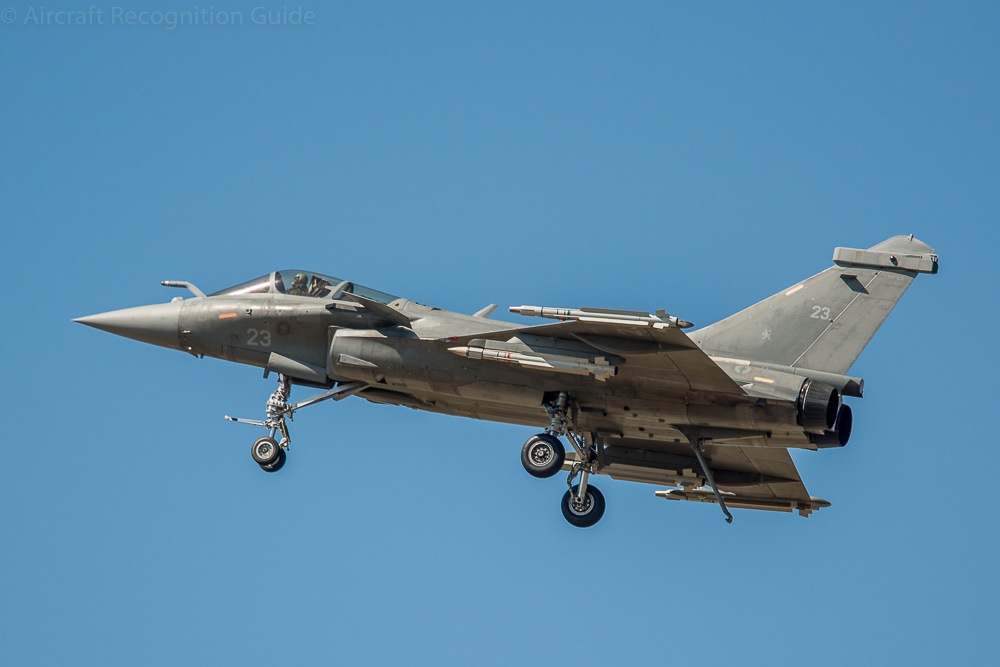 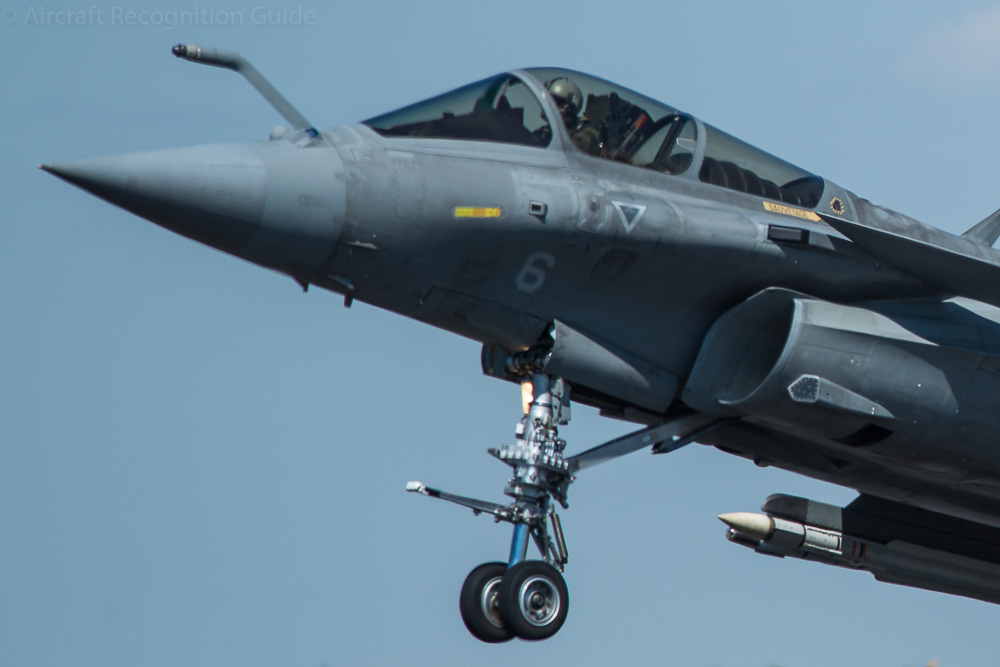 Detail of the nose gear of the Rafale M, with a diagonal beam at the rear and an attachment for catapult at the front. 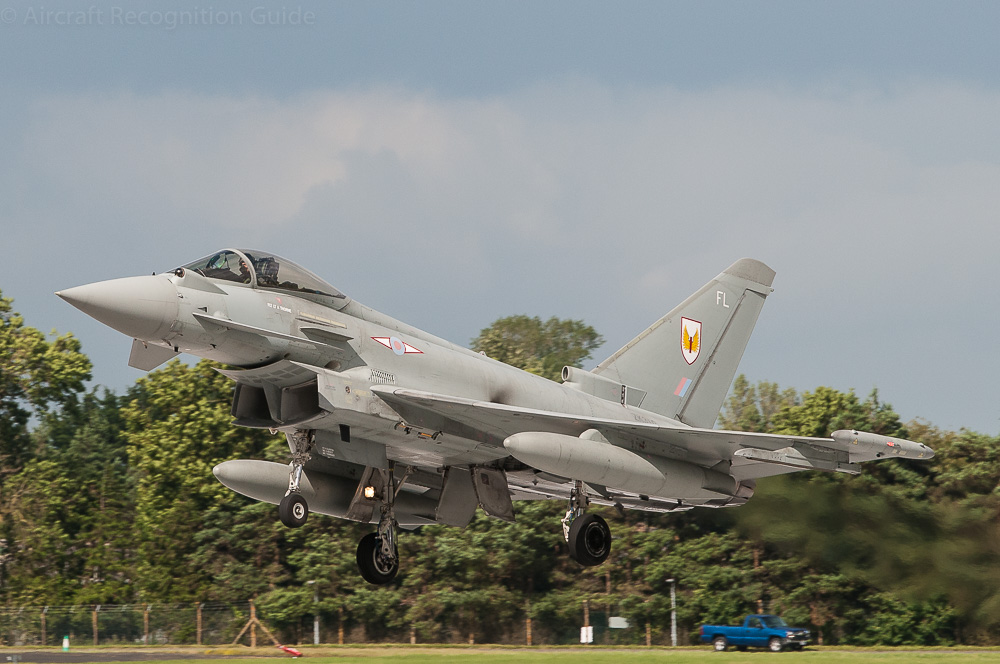 The Dassault Rafale was developed in the same time as the Typhoon and they share many characteristics. The main difference is in the air intakes: the two rectangular intakes of the Eurofighter are placed underneath the fuselage. Also the canards of the Typhoon are facing down. 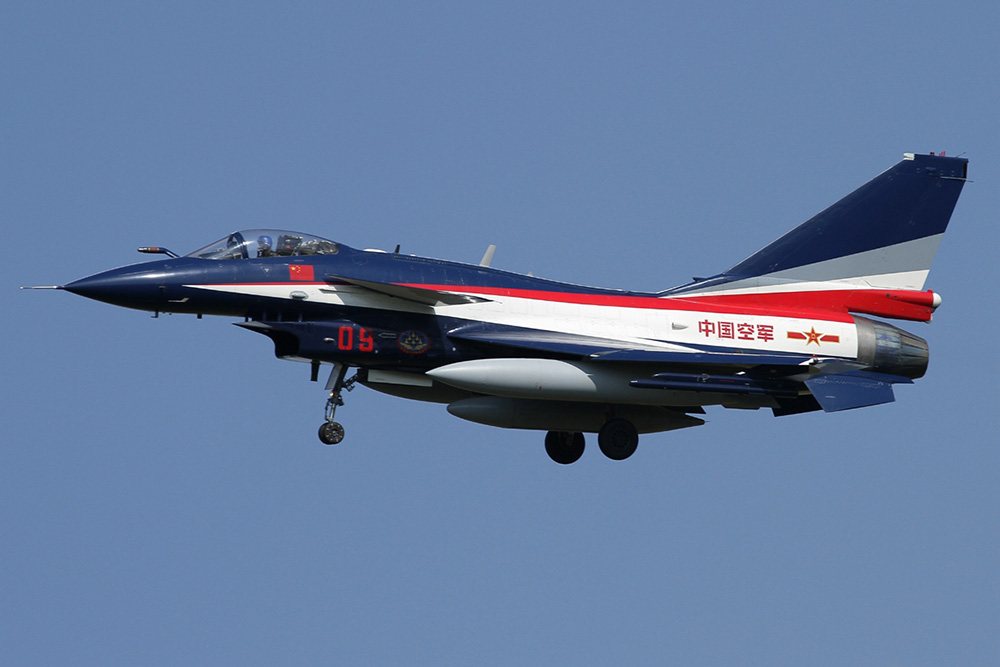 This Chinese fighter has the same general appearance as the Rafale but has a single engine, fed by a single rectangular air intake underneath the fuselage. (photo Aktug Ates/WikiMedia)

The same essentially applies to the Lavi of Israel Aircraft Industries (IAI). However, this delta wing with canards fighter is also powered by one engine. 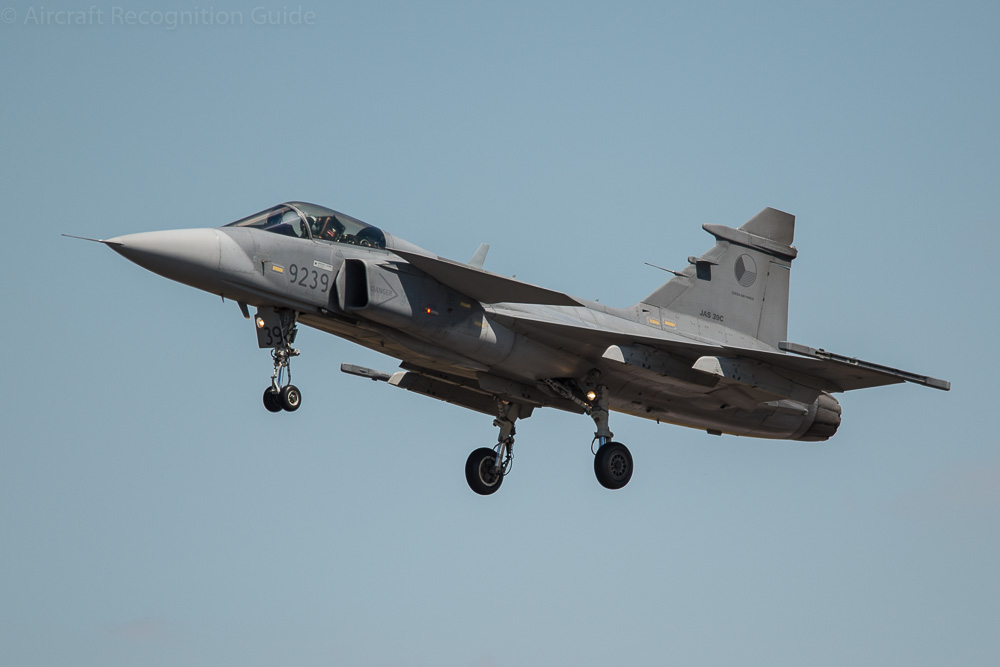 Apart from being a single engine fighter the Saab Gripen  looks quite similar to the Rafale. The main other difference is in the air intakes: the two oval intakes of the Rafale are placed diagonally at the side the fuselage.