When Italy and Brazil where both looking to find a replacement for the Fiat G.91 and Aermacchi MB326 respectively they joined forces. A joint venture with the name AMX International was set up to develop the AMX light attack fighter. It is a single jet aircraft with its engine in the rear fuselage, fed by D-shaped air intakes at the side of the fuselage, in front of the wing roots. Just in front of them is the slightly popping out canopy. The AMX has high mounted, swept wings, and a very conventional tail. Perhaps most typical is the single wheel main landing gear with its 'claw-like' design. The nose gear also has one wheel, and is of a trailing link type. 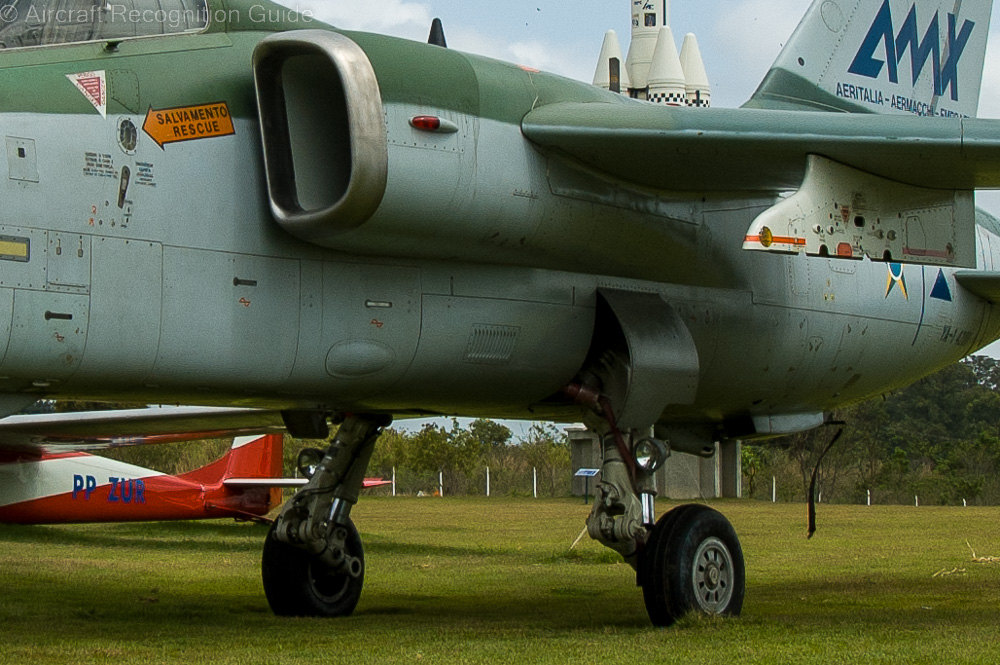 The trailing link single wheel main landing gear, giving it a 'claw-like' appearance, is perhaps the most outstanding feature of the AMX.

The Italian designation for the AMX is A-11, with popular name Ghibli. The original A-11A version is different from the Brazilian versions in that it has a fixed refuelling probe at the side of the nose and only a single cannon on the left side of the nose. This cannon has a larger diameter, but the fairing is shorter than on the Brazilian aircraft.

The ACOL (Adeguamento delle Capacità Operative e Logistiche) upgrade resulted in the A-11B. It has new avionics, a 'glass' cockpit and can handle more weapon systems. As far as we know, there are no external differences compared to the A-11A. 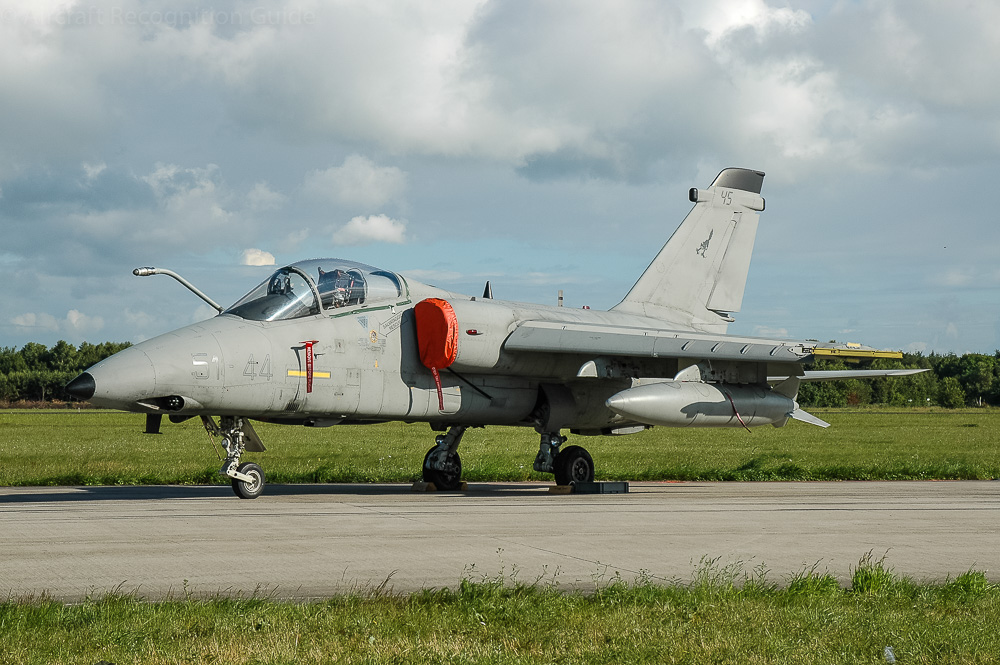 AMXs of the Italian air force have a fixed refuelling probe and a short cannon fairing as main recognition points (part from having no cannon on the right side, but that is not visible here). 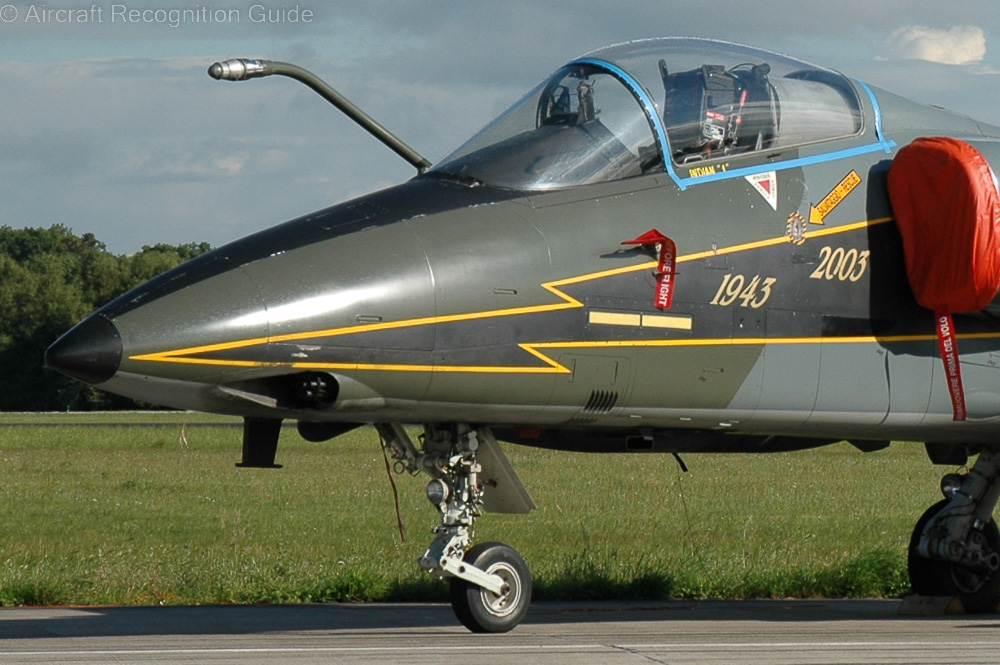 Zooming in on the nose you can clearly see the short cannon fairing compared to that of the Brazilian aircraft below.

The Brazilian version of the original AMX is locally called A-1A. This has a refuelling probe at the right side of the nose as well, but two cannons, one of each side of the nose. This cannon has a smaller diameter than the one on the Italian examples, but the fairing is longer.

The prototypes were designated YA-1. They are externally the same as the A-1As, except for the refuelling probe: this is not present. 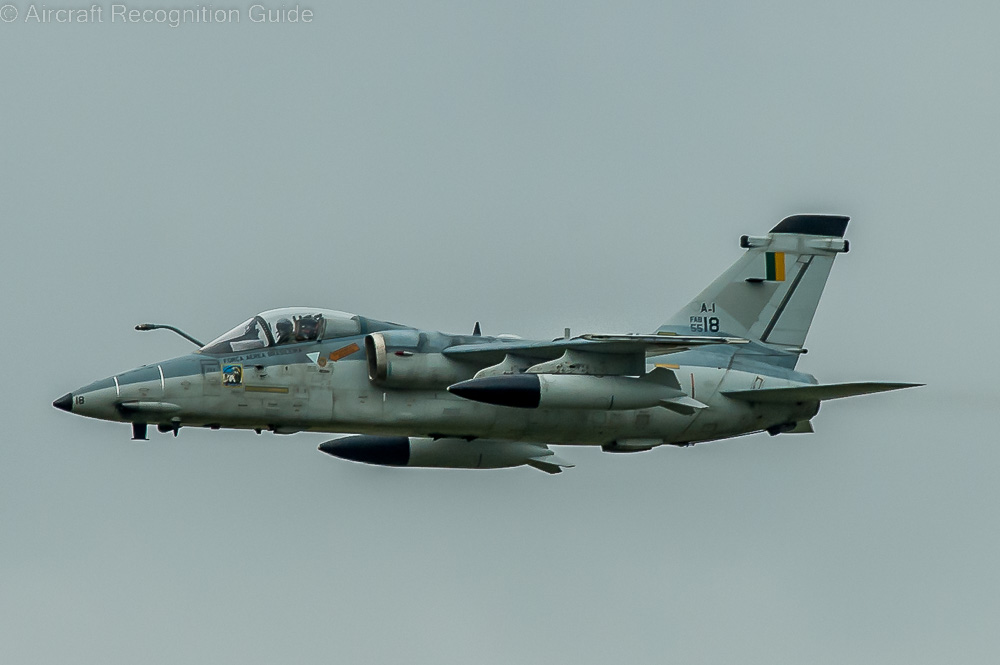 To distinguish the Brazilian A-1A (sometimes called just A-1) from the Italina A-11A, you'll have to look at the nose, as there are two cannons. 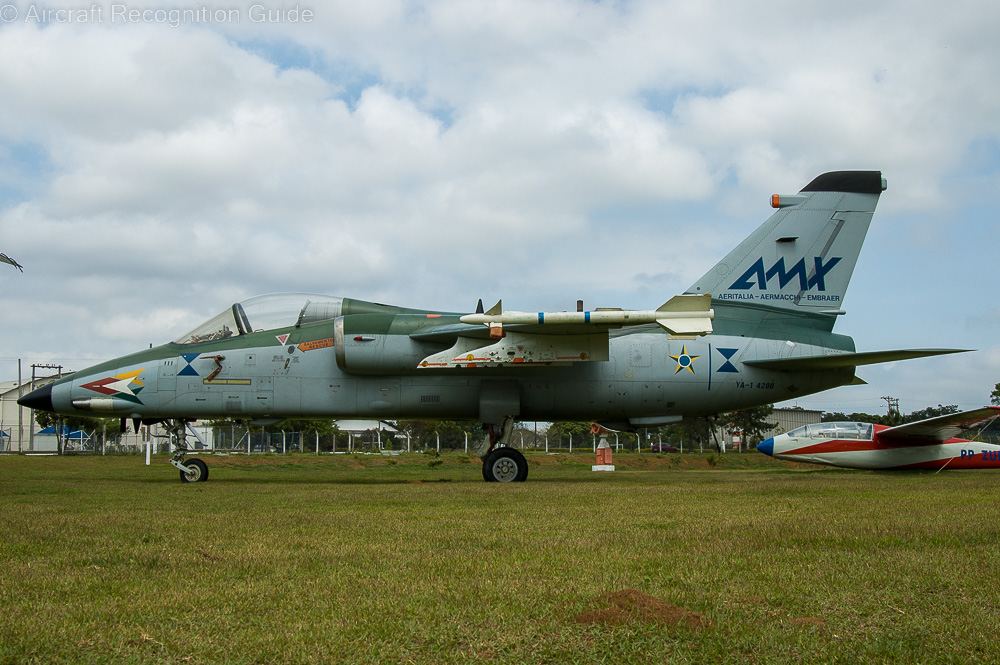 The Brazilian AMX prototypes had no refuelling tube sticking up from the nose. 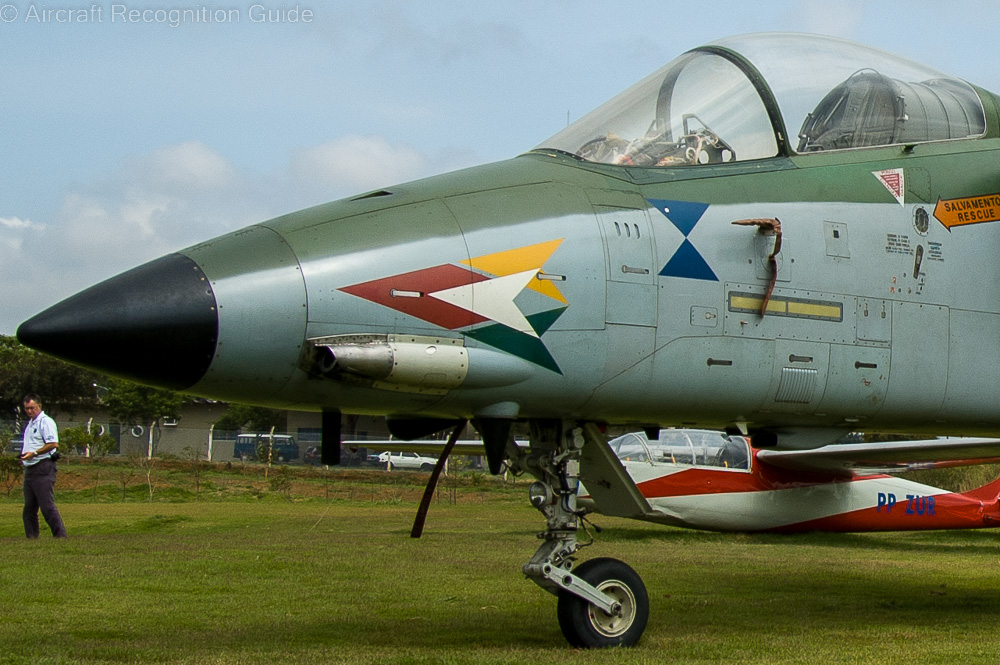 The cannon fairings of the A-1s of Brazil are longer than on the Italian aircraft, another recognition point.

In Brazil an update programme for the AMX led to the modernised A-1M. Like on the Italian ACOL version weapon systems and avionics have been changed. Of of the features added was a Forward Looking Infrared (FLIR) system. This is placed at the side of the fuselage, infront of and below the air intake. Hence you can distinguish the A-1M from the A-1A. 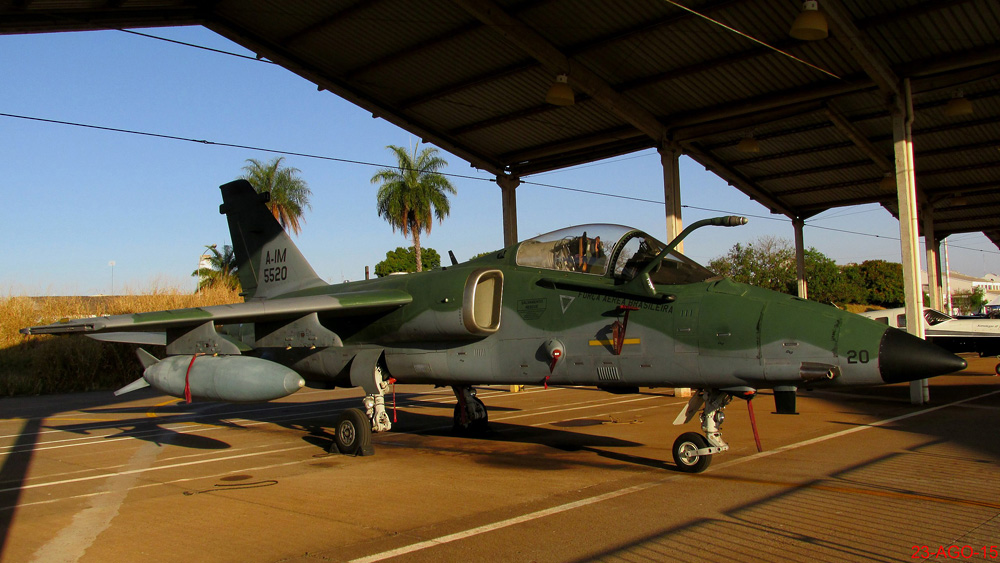 The modernised A-1M has a FLIR system on both side of the fuselage, below the canopy, in front of the air intakes. (photo: Marco Aurélio Esperz/WikiMedia) 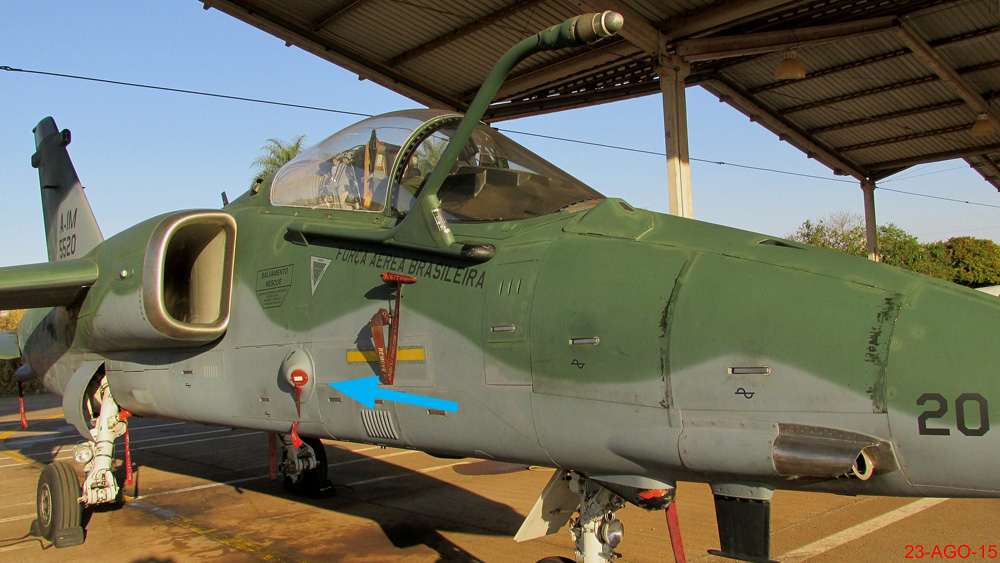 On this close-up you can better see the FLIR sensor of the A-1M, marked with an arrow. (photo: Marco Aurélio Esperz/WikiMedia)

The dual seat trainer version of the AMX is called AMX-T by the manufacturer. However, in Italian military service it is known as TA-11A (for the original vesion) and TA-11B (for the ACOL upgraded version. Apart from the longer canopy to enable a second seat the TA-11 is externally the same as the A-11. 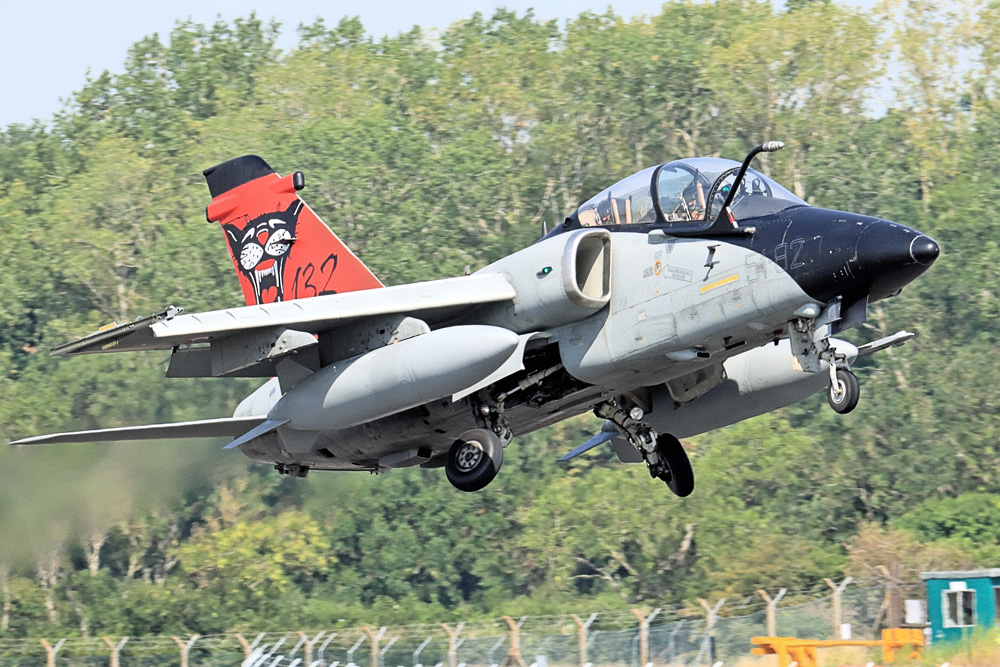 As you can see this TA-11A trainer version of the AMX is externally the same as the single seat A-11A, except for the longer canopy of course. (photo: Airwolfhound/WikiMedia)

A-1B is the Brazilian designation for the AMX-T. Like its Italian counterpart the only externally visible change compared to the A-1A is the longer canopy. So you can distinguish the A-1B from the TA-11A/B by looking at the cannon(s) and their fairings. 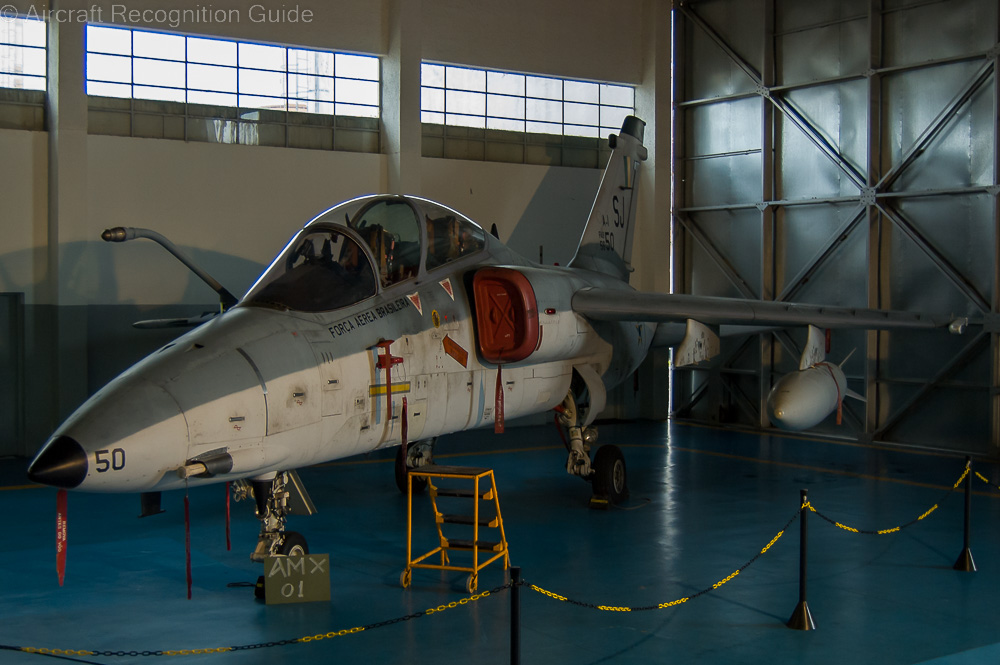 The A-1B is the Brazilian trainer version of the AMX. It has a dual seat cockpit, but still two cannons and long fairings in the nose. 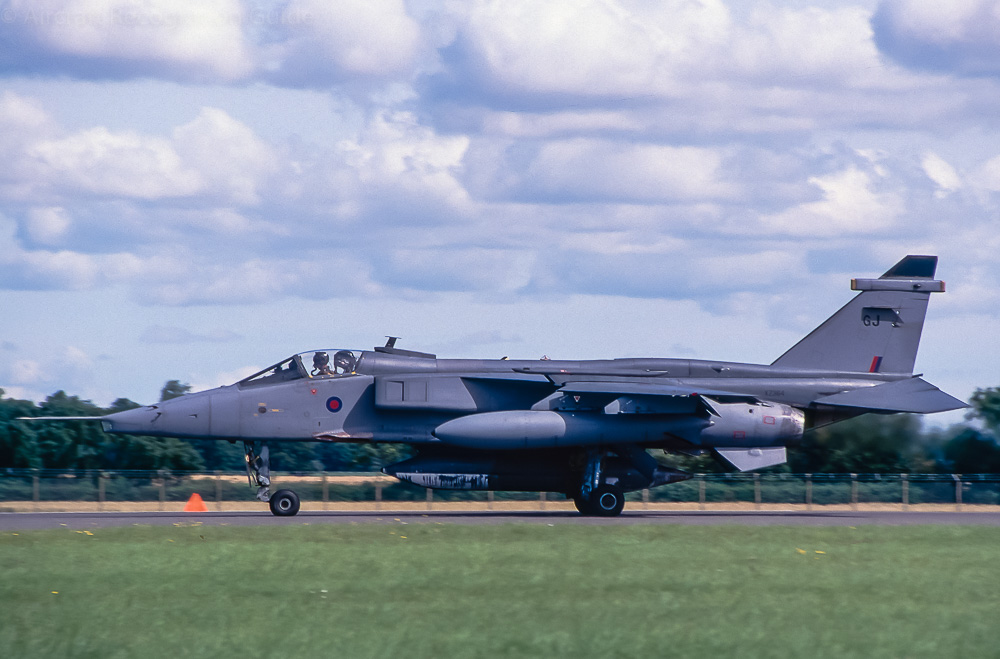 The general configuration of the Jaguar is similar to the AMX, inclusing high wings, canopy shape and rectangular air intakes. However, the Jaguar has two engines, with exhausts below the rear fuselage, and two wheels on all landing gears. 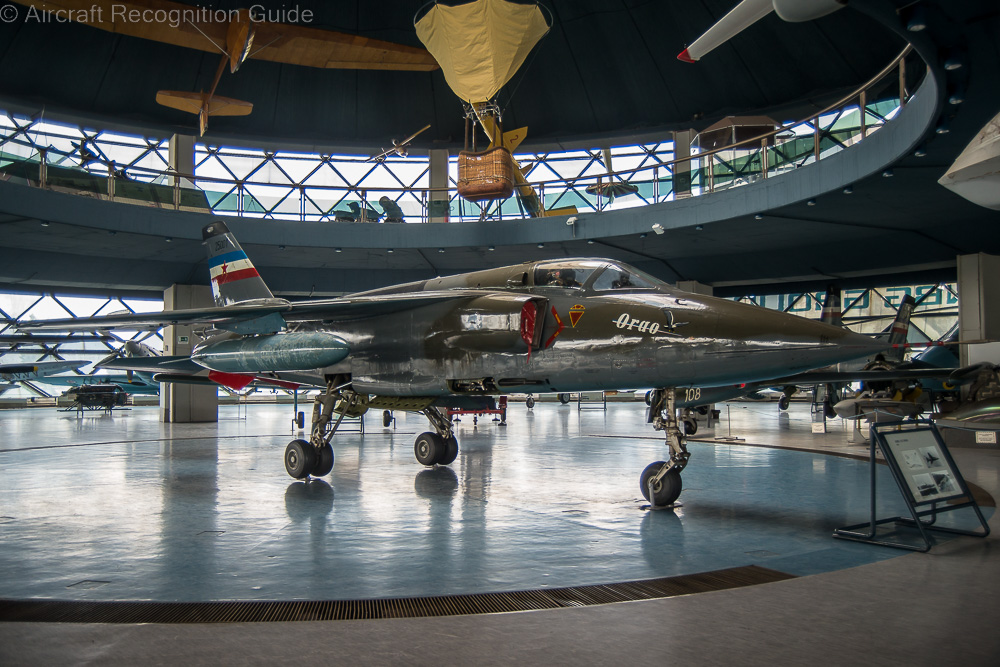 Another two engined fighter of similar appearance to the AMX, but even more the Jaguar, is the Orao. The J-22/IAR-93 has the exhausts in the rear of the fuselage though, and a single wheel nose gear, which are more like on the AMX. Still the longer air intakes, two engines and double wheel main landing gears should be enough the avoid confusion. 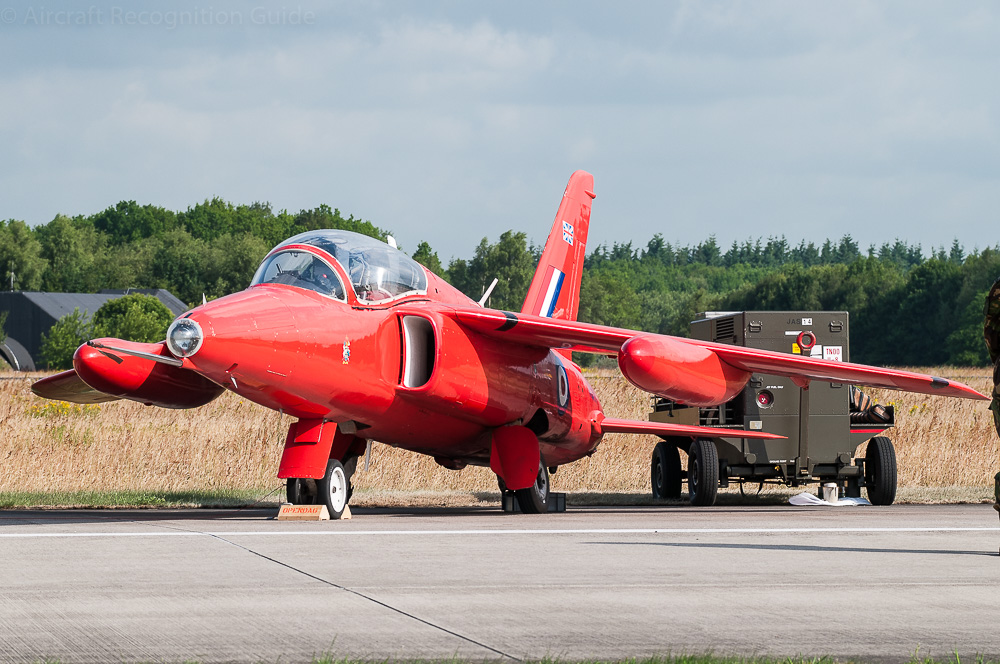 The Gnat only comes with a dual seat cockpit, so could confused with the AMX-T. The air intakes of the Gnat are larger though, the nose gear has two wheels and all gears are short and retract backwards.