This Italian jet trainer was the successor of the MB326 and clearly has the same basic features. The MB339 also has straight low mounted wings, narrow air intakes in the wing roots and the exhaust far beyond the vertical stabiliser. The aircraft sits close to the ground with its short landing gear. The main gear retracts outward, in the wings. Different is the tandem cockpit in which the instructor in the back seat sits higher than the student pilot in the front. 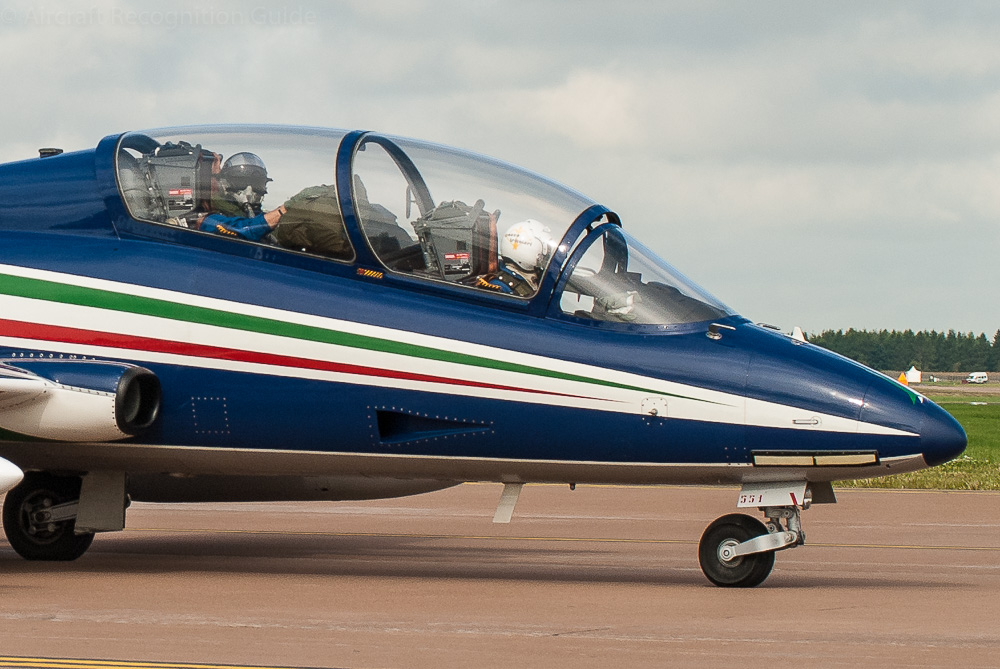 The small air intakes in the wing roots are one of the main features of the MB339, as is the cockpit in which the back seat is higher than the front seat. 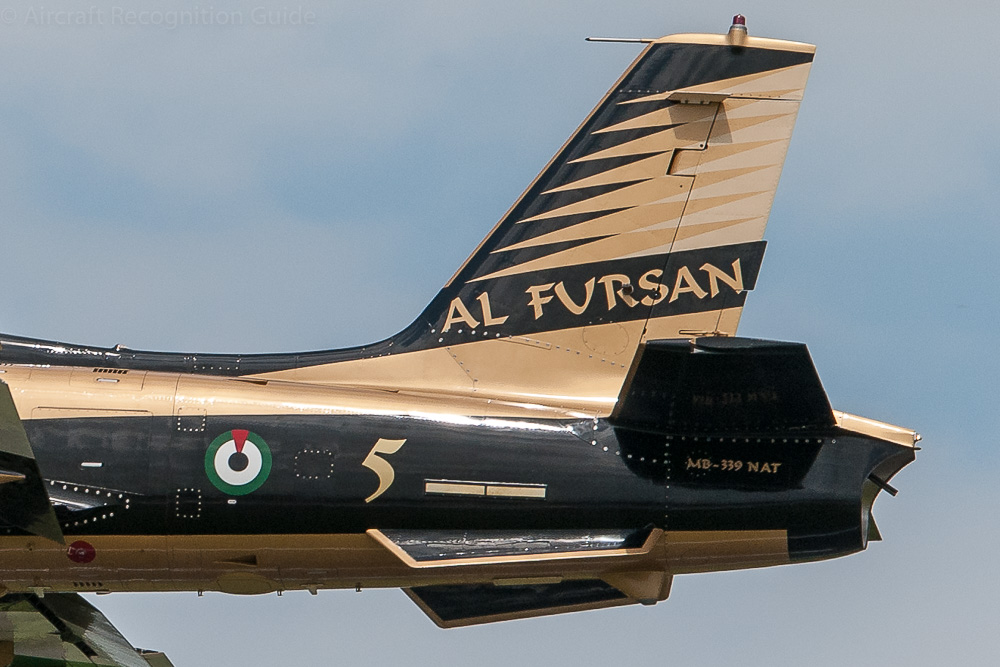 The vertical stabiliser of the MB339 is placed ahead of the horizontal stabilisers and exhaust.

The different versions of the MB339 can externally be distinguished by

Details will be added later.

The three prototypes of the MB339 were designated MB339X. Externally, they appear not to differ from the first production version, called MB339A. Both versions have large but variable diameter tip tanks and two seats as recognition points. Each export version had a specific designation, namely MB339AM for Malaysia, MB339AN for Nigeria and MB339AP for Peru. 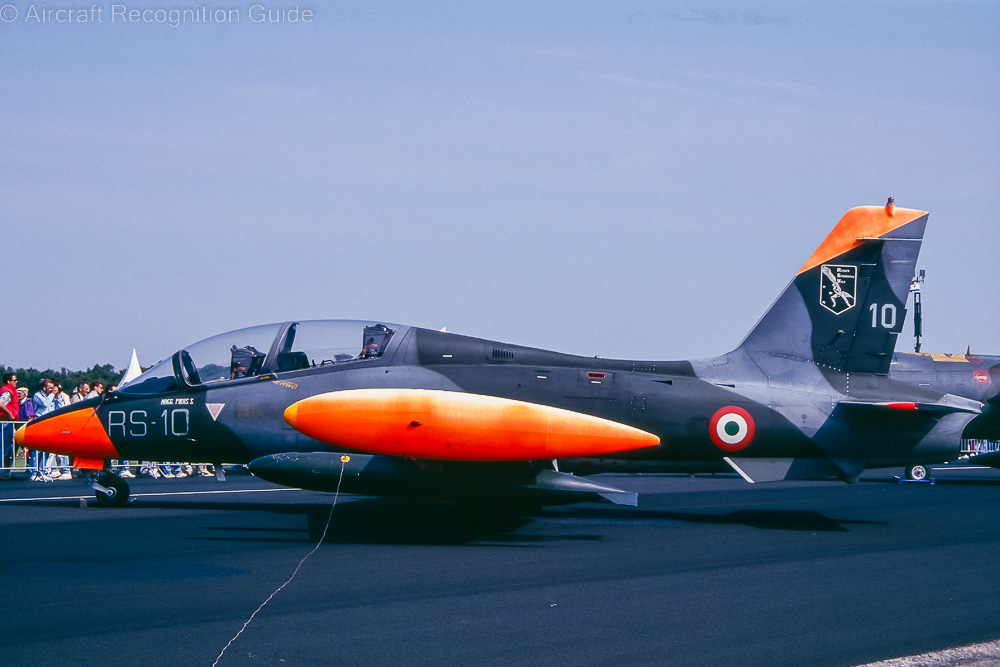 This MB339A is especially recognised by the large diameter tip tanks. Compare them to the MB339C below, and you'll see they have a smaller diameter.

Probably this version has underwing pylons, but is for the rest similar to the MB339A. However, just one was built, so it is guessing.

This is the more modern variant of the MB339. Externally, the main difference compared to the MB339A is in the tip tanks: these have a smaller and more constant diameter. It also has one or two removable pylons under each wing, so these are not always a recognition point. Internally, more has changed, incuding a digital cockpit. Subversions include the MB339CB (for New Zealand), MB339CE (for Eritrea) and MB339CM (for Malaysia). This version was also a contender in the JPATS competition in the United States, where it would have been known as Lockheed T-Bird II hadn't it lost. 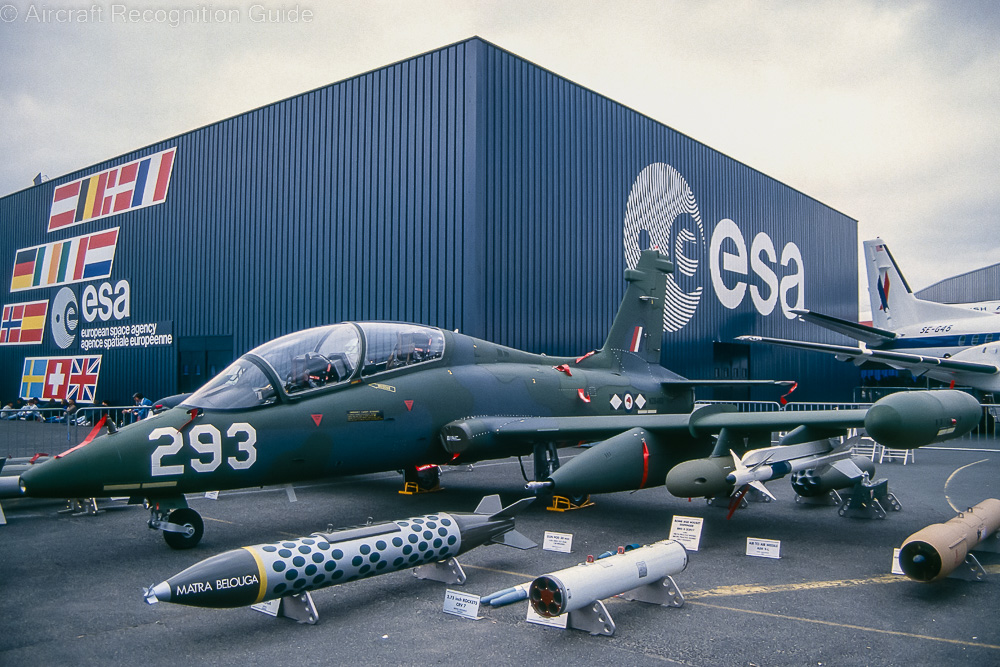 MB339CB was the export version of the C model for the Royal New Zealand Air Force. Note the narrower tip tanks with a more constant diameter.

The Italian air force got an even better MB339C, with a fully digital cockpit and a fixed refueling probe at the side of the nose. The export version is known as MB339FD. 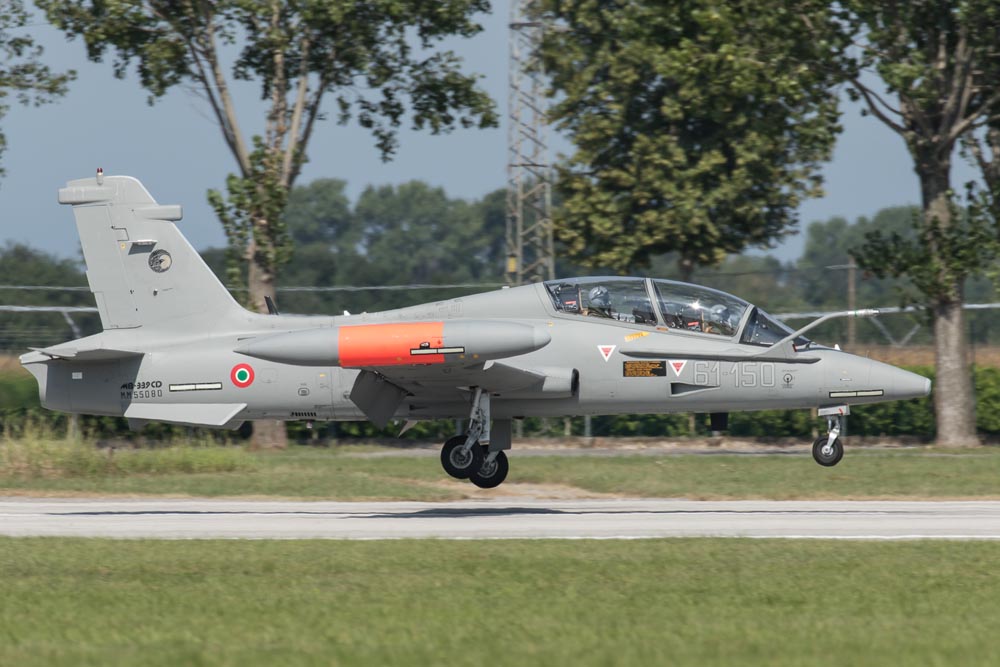 Clearly visible is the fixed refueling probe at the side of the forward fuselage, the key feature of the MB339CD. (photo: Gian Marco Anzellotti/WikiMedia)

Aermacchi tried it with a single seat light attack version of the MB339, but this MB339K this not succeed. Only one aircraft was built. Obviously, the single seat cockpit is the main distinctive feature, as are the cannons at the lower side of the fuselage below the cockpit. Additionally, the MB339K has pylons under the wings, but no tip tanks. 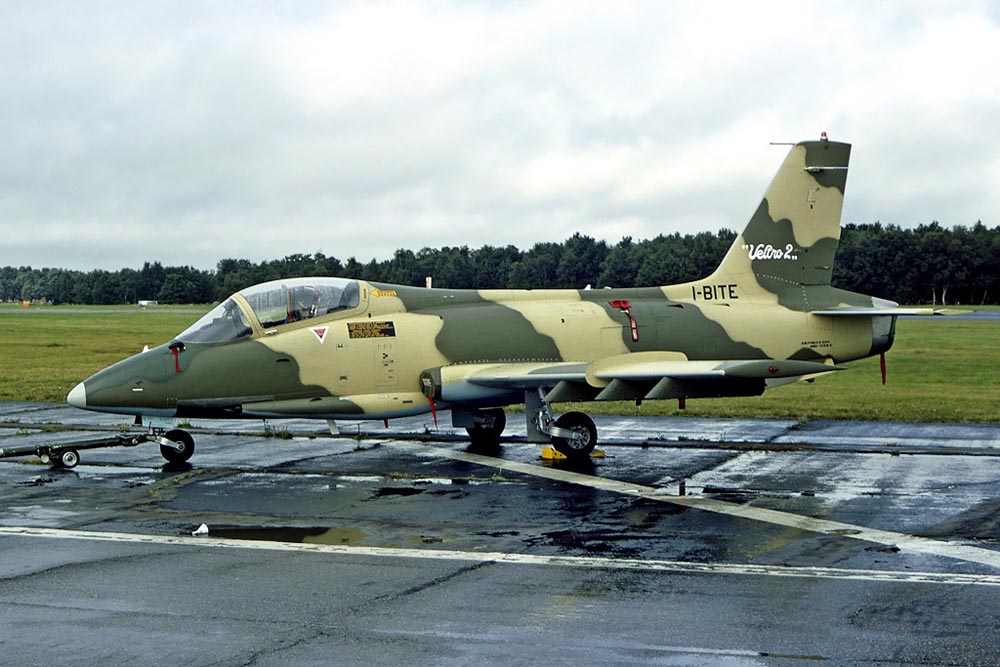 The MB339K is the easiest MB339 version to recognise as it is the only version with a single seat cockpit. Also note the cannons at the side of the fuselage, below the cockpit. (photo: Steve Fitzgerald/WikiMedia))

Both in Italy and United Arab Emirates the MB339 is used by the aerial demonstration teams, called Frecce Tricolori and Al Fursan respectively. The MB339s are modified MB339As, called MB339PAN (for Pattuglia Acrobatica Nazionale) in Italy and MB339NAT (for National Aerobatic Team) in the UAE. They have no tip tanks but have smoke generators. 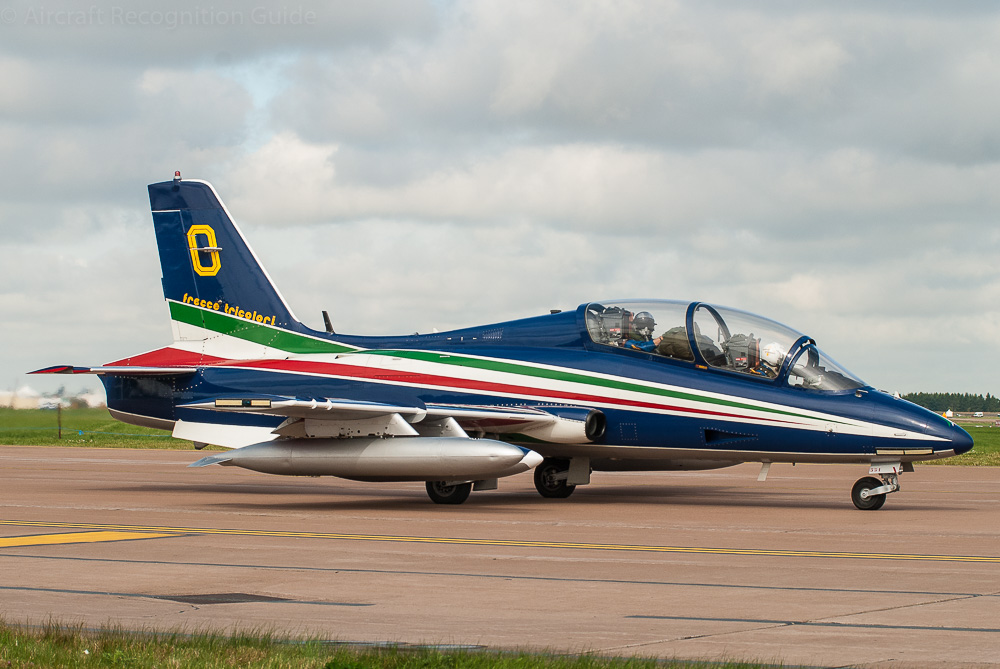 The famous Frecce Tricolori uses the MB339PAN version. This is basically a MB339A without tip tanks.

This is a version only used in Italy, for electronic calibration and electronic warfare. The designation MB339RM reflects this as "RM" stands for "radiomisure", or radio measurements. We don't know its characteristics, so if you know please inform us. 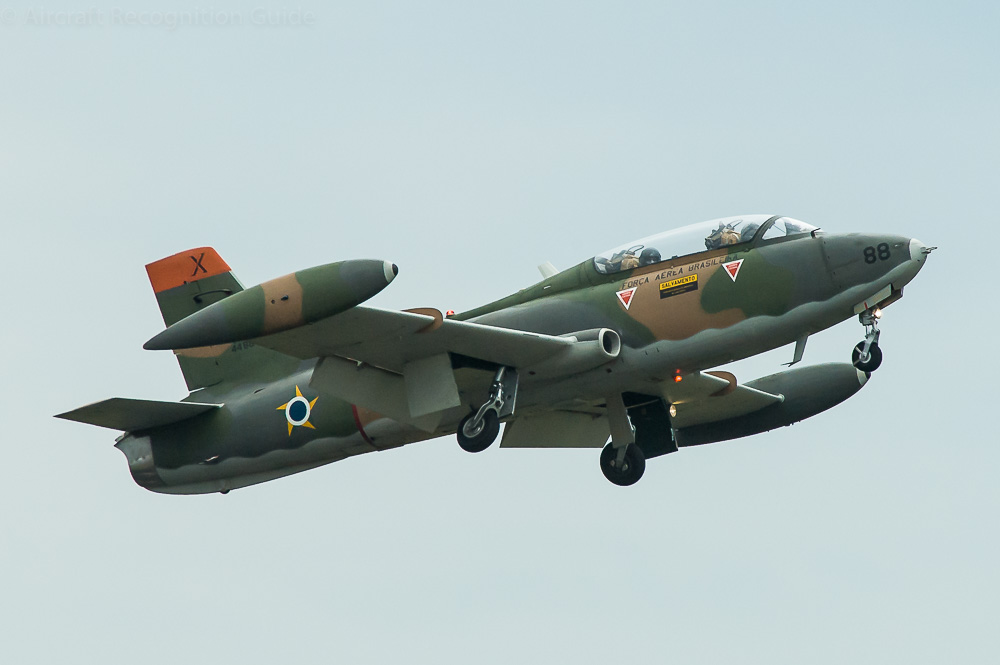 Being a derivative of the MB326, it is logical that they are look-a-likes. The main difference is in the front fuselage. The canopy of the MB326 consists of two parts, with a bow frame near the front. The student and instructor sit at the same level. In the MB339 the back seat is higher than the front seat, and the canopy has three parts. Also nose of the MB339 is more pointed. 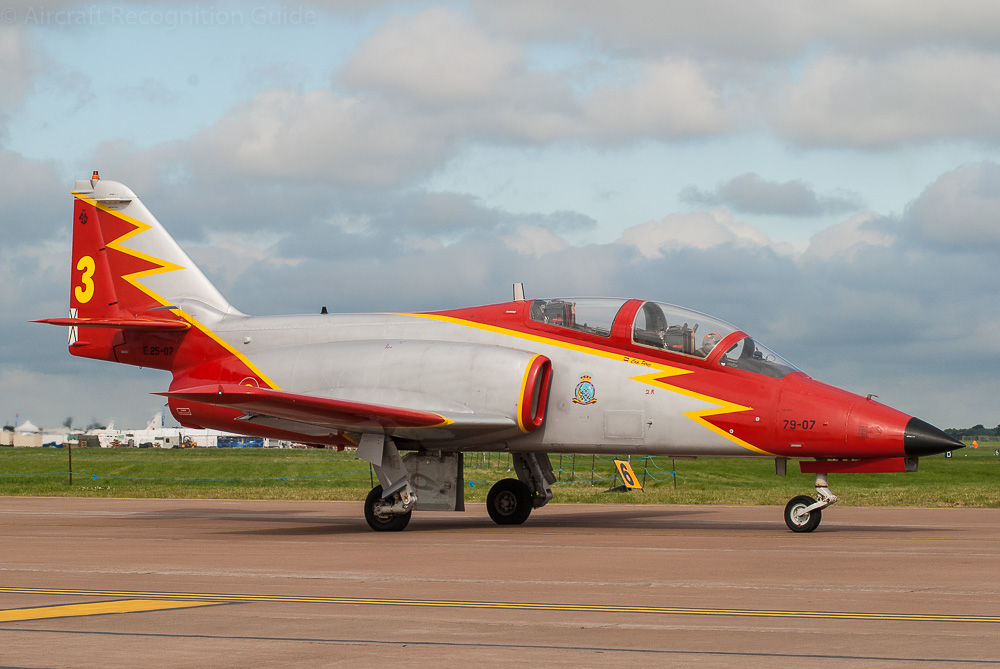 The canopy and straight wings are similar to that of the MB339, but there are many difference in other parts. The landing gear of the Aviojet is longer and the air intakes are much bigger and longer. Furthermore the Aviojet has the exhaust before the tail. 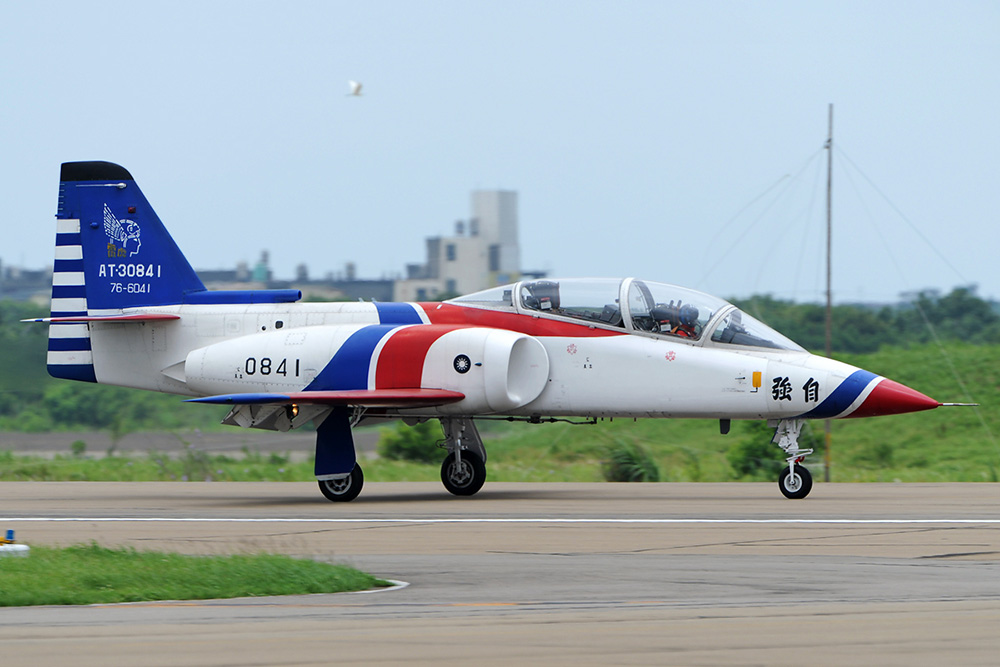 This is a twin engine jet trainer with engines at the sides of the fuselage and bigger intakes but for the rest it looks quite similar to the MB339. (photo Toshiro Aoki/WikiMedia) 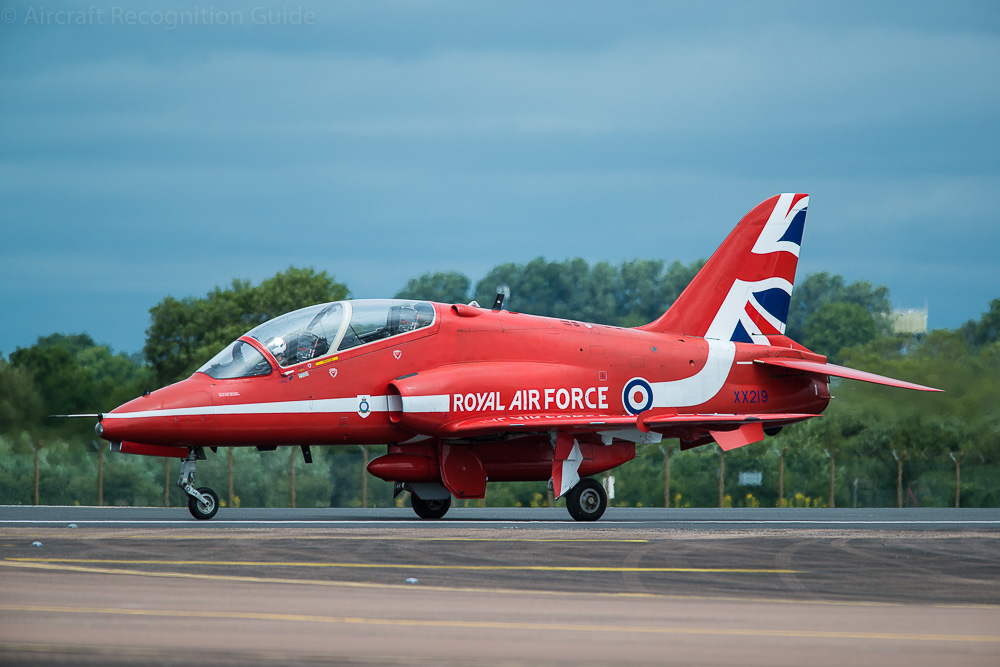 The Hawk also has small air intakes, but more D shaped, swept wings, a curved leading edge of the tail and horizontal stabilisers with anhedral. This should be enough not to mix it up with the Aermacchi. 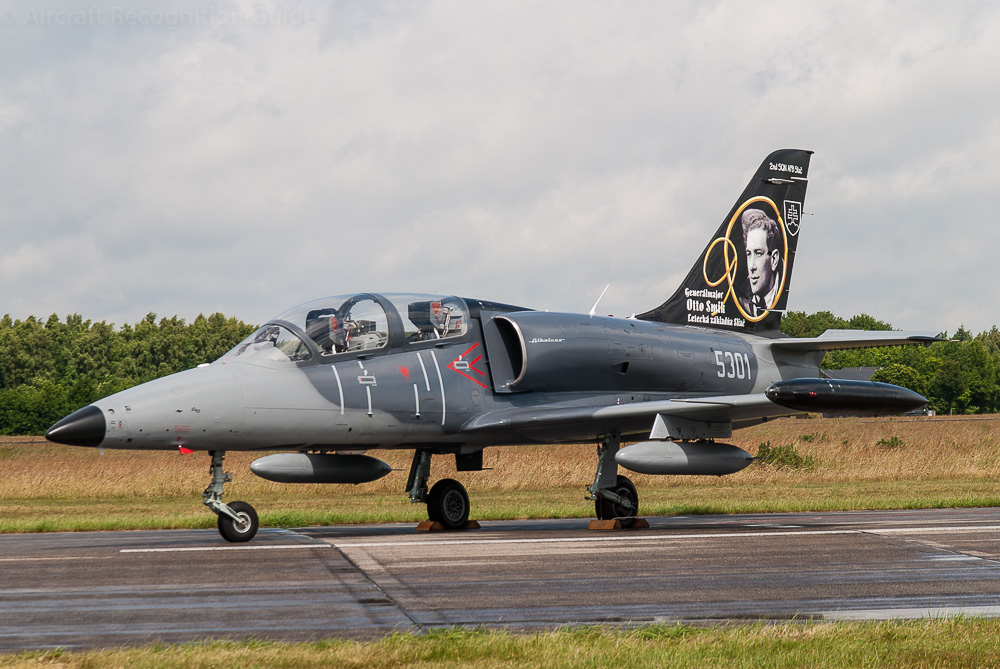 The Aero Albatros has much larger air intakes than the MB339. They have nearly the shape of half circles, and are placed at the side of the fuselage, just after the cockpit. Also the tail is taller.